I started hunting when I was a little girl. Mum and Dad always took me out in their backpacks until I was big enough to walk with them. Lots of giggles and laughter from me and lots of aggravation from Dad with my giggles often scaring the game away. Over the years I’ve learned the ways of hunting.

I’ve travelled and hunted in many countries (including New Zealand, Argentina, Hungary, Czech Republic, Ukraine, America and Greenland) but this story is about my hunt in South Africa. 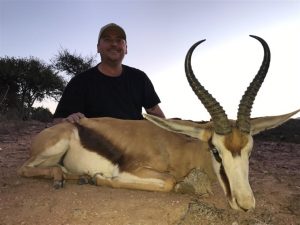 As the plane landed I could not believe I was in Africa.

After picking up our luggage we walked out and met Mel Kleinhans, our outfitter and the owner of Shumba Safaris who is a really hardworking, awesome and funny guy. I can’t say enough good things about him. If you’re looking to hunt in Africa, I definitely recommend him. So Mel picked us up and we were on our way. We got to camp and it was beautiful, we had a really nice room with a great view then went down and sighted our guns in before returning for dinner then it was off to bed to get some rest for a big day of hunting ahead.The next day, we set off to the first property where the Eastern and Western Cape met. We were staying in a cave with really comfy beds, showers, flushing toilets and a big fire pit. It was really cool. Dad insists we hunt free range and when Mel told us we were going to be camping in a cave, we thought it would be a lot rougher than what it turned out to be. After some cereal for breakfast the next morning we set out hunting for plains game. We weren’t looking for anything in particular. We were just looking for any trophy animal that we happened to find.

The first thing we saw was a blesbok about 75 yards away. Mel, Dad and I got out of the Landcruiser and got the shooting sticks up, I shot it a few times (Dad likes me to make sure I do a job properly) and we got it out of the thick bush, took a few pictures, loaded it in the Landcrusier and we were off again. We brought the blesbok back to camp and the tracker, Seemi, skun it out.

That night we stayed in the cave and had steak for dinner, then went to bed. A few days later we went to a different property and started hunting there. Dad shot a few springbok and gemsbok and I shot a gemsbok. I shot a klipspringer 272 yards away across a valley. I missed it the first time but nailed it the second time. The tracker, Rocky, took about ten minutes to get to it. It took us about ten minutes just to climb back up to get to the car which was only about 20 yards away. 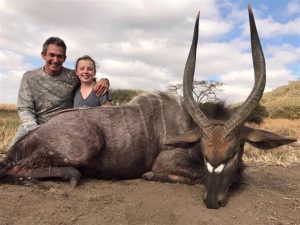 A few days later we went back to Mel’s home camp and hunted around there near Jeffrey’s Bay, where I got a grey duiker and Dad got a carical.

On the way back to Mel’s home, we stopped in at another of his concessions and hunted springbok. There were springbok and ostrich’s everywhere on this place. It was a really windy day and the animals were really nervous. I stalked a bunch of big springbok but they kept on staying out of range. Finally we found a big black male that we could stalk up on and I dropped the biggest springbok we’d seen all hunt. It was a great first hunt in Africa and Dad and I think Mel and his family are awesome. 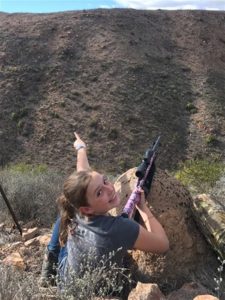 After hunting with Mel, we went to the airport and flew to Durbin and met Todd and Annalene Lutman. Todd was our PH for the first part of our second hunt, which was with Chumlet Safaris.

We drove from the airport to camp which was really nice and right next to a river before dinner and going to bed.

The next day we set out hunting and after about five minutes of driving the trackers spotted a bushbuck on the bottom of the hill we were driving on. We got out and got the shooting sticks and set up. We had to move and set up a bunch of times until I could get a clear shot. I aimed and I shot it. I hit it but it ran down into a bunch of bushes. Everyone wanted me to stay in the car with one of the trackers while they went and got the bushbuck because they are really dangerous when they are wounded. After about half an hour Dad and Todd came back with my bushbuck. They had found it dead in a really steep and thick gully. We loaded it up and drove down the road a little bit and took a few pictures and went back to camp and had lunch and a bit of a rest. A few hours later we set back out but came back with nothing. Over a few days we weren’t having any luck but we set out one morning and I couldn’t focus because I felt sick. We went back to camp and had lunch and a rest but that afternoon I stayed back at the lodge with Annileane while Todd and Dad went out hunting. After a few hours they came back with a massive Kudu. 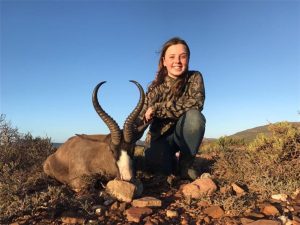 The next day we set out again but found nothing big enough to chase after, but while we were hunting we came across a tower of giraffes. We got out and walked with them for a little bit and took a bunch of pictures and videos. It was one of my favourite parts of the whole trip!

A few days later we drove to meet up and hunt with the outfitter, Tyrone Milne of Chumlet safaris. Tyrone is a really hard worker and a great guy. Again, I can’t say enough good things about him. His cook, Annie, and his tracker, Benny, were awesome too. Camp was beautiful with Dad and I having our own villas each. 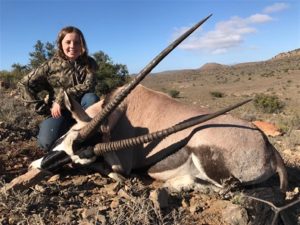 Over the next few days, Dad got a few more kudu, another blesbok and an impala. But after I missed a kudu, we saw a big nyala and went down to look at it. We climbed down a thick gully to have a better look. There were a few nyala there, but there was one that was a giant compared to the rest. We went into some bushes and I lined up and shot it. I hit it hard. It ran down a bit of a ridge and we followed it. It then ran down a really steep hill. So when we found it, we took a few photos and then dragged it back up the hill on a canvas stretcher. We brought it back to camp and Benny skun it out. Benny the tracker once again did a great job of hunting all day and skinning before dinner.

Over the next few days I missed a common reedbuck and Dad got one.

We had an amazing time in South Africa! It’s definitely a trip to remember!

Our outfitters and PH’s were outstandingly good! I can’t say enough good things about them. Shumba Safaris and Chumlet Safaris. We can’t wait to hunt with them again.

Exploring new terrain can be daunting. Not knowing

Merry Christmas to all you legends!!! 🎄 Thanks

The smallest deer in Australia, the Hog Deer, are