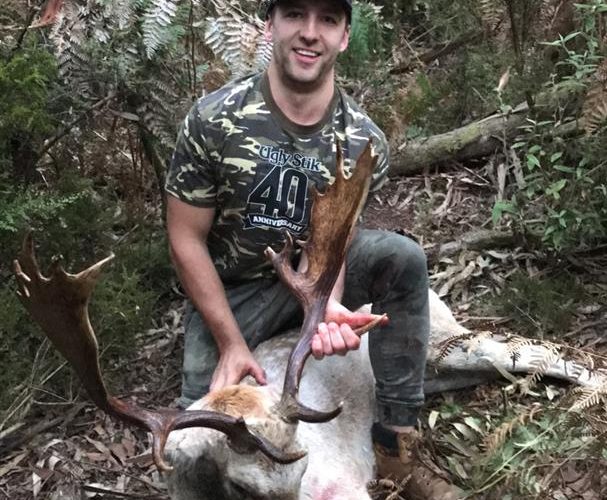 It was the first weekend of the rut, and the property had been undisturbed by anyone for over a month. I have been hunting here for years. The property lends itself a clear view of hilly fields which back onto a dense forest. I have been patiently waiting to find the dream stag that had eluded me until now. I called my brother-in-law, Andrew, the night before the hunt. Andrew hasn’t had much hunting experience in the past, so I invited him to come along and share in the hunt with me.

The morning of the hunt was a typical, autumn morning. We could see the steam of our breath as we moved our gear into the car. There was not a breath of wind in the sky. We drove down to the forest edge, a perfect spot that on any given morning can boast a herd of deer walking out of the tree line to feed. We parked the car and set off on foot to the ridge line of the hill that overlooks the property. Silently, we began creeping into the best viewing position before the first light. The wait had begun. We lay on the wet grass, keeping our eyes focused for any sign of movement. As the darkness began to subside, we started to see silhouettes forming in front of us. Looking through the scope, I started to scan the open field. Each hazy silhouette becoming more clear as the sun continued to rise. Doe .. kangaroo .. doe .. doe .. kangaroo .. nothing caught my eye. I was in this same situation last year and missed my opportunity so I persisted, remaining as still and silent as possible. I knew he had to be out there somewhere, but he wasn’t going to make it easy for me. 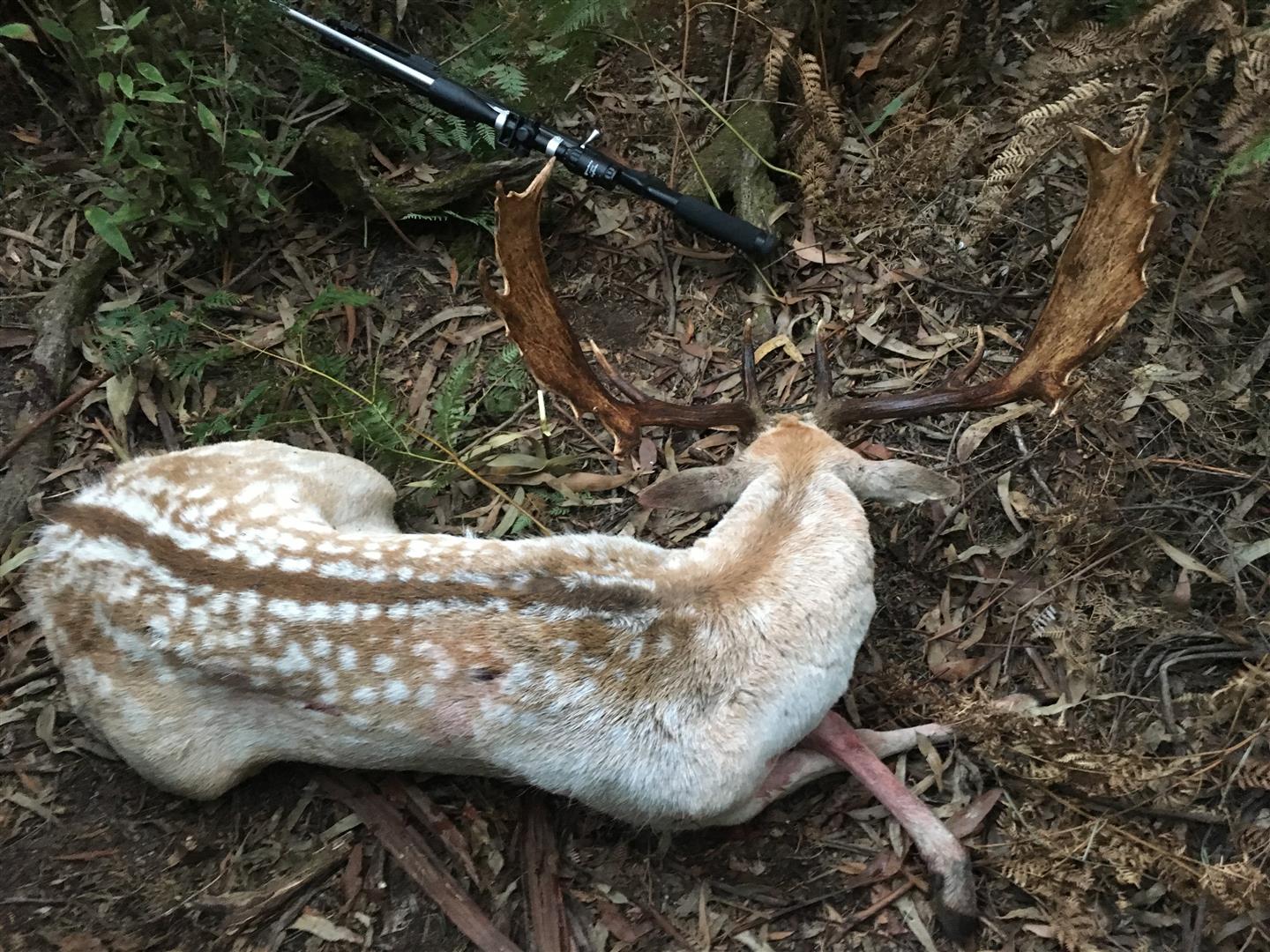 I continued scanning for another few minutes, vision becoming more clear with every passing moment. I whispered to Andrew “You see that? Out the back, there he is!”. We spotted a young stag amongst his does. He was a nice stag but not the one I had been hunting for. He began bellowing to his does as we watched and listened. He started running from doe to doe, honking and trying his luck. Just as I thought to myself that I had lucked out on the dream stag again, I heard something. “Did you hear that?!” I whispered to Andrew. A second honk, distant. This sound was giving us hope. I scanned the open field and noticed a white stag rubbing his antlers against a tree. I quickly swung the gun around and through the scope I saw an incredibly impressive stag.

The mature stag hearing the young buck, started moving fast towards the herd. He would have been about five hundred metres away, but was quick to close in.

I was shocked to see such a magnificent stag just a few hundred metres out. The mature stag started on the move. He was chasing the young stag around the field, herding him from one side of the opening to the other. It was time for us to move.

We grabbed our gear and started to move down the hill, keeping low to the ground and constantly checking to see if our movements were noticed. Fortunately for us, the stag’s actions held the attention of the does and kangaroos. I snuck into a position against a fence post, resting the rifle on top of the post and braced myself. I was hoping the stag would push the young buck under the fence line seventy-five metres out and into the forest. Luckily for me, I was right. I loaded the gun and tried to control my breathing as I watched through the scope.

The young stag came into the cross hairs and ran off, then the mature stag ducked his head under the fence and popped up. As he raised his head, I held my breath and let off the shot. Crack! I lifted my head to see if he had dropped. My stomach dropped as I saw him running off towards the tree line. I had missed his neck, but I wasn’t going to let him get away. This was my only chance and I wasn’t finished with him yet. I called out to Andrew to follow me and with excitement and determination, I was off. I grabbed the gun and sprinted after the stags, across the field, through the fence and into the forest. I knew the area well but I didn’t see which direction he went. I knew I just had to keep moving in the hope he would stop and turn back to see what was chasing him. 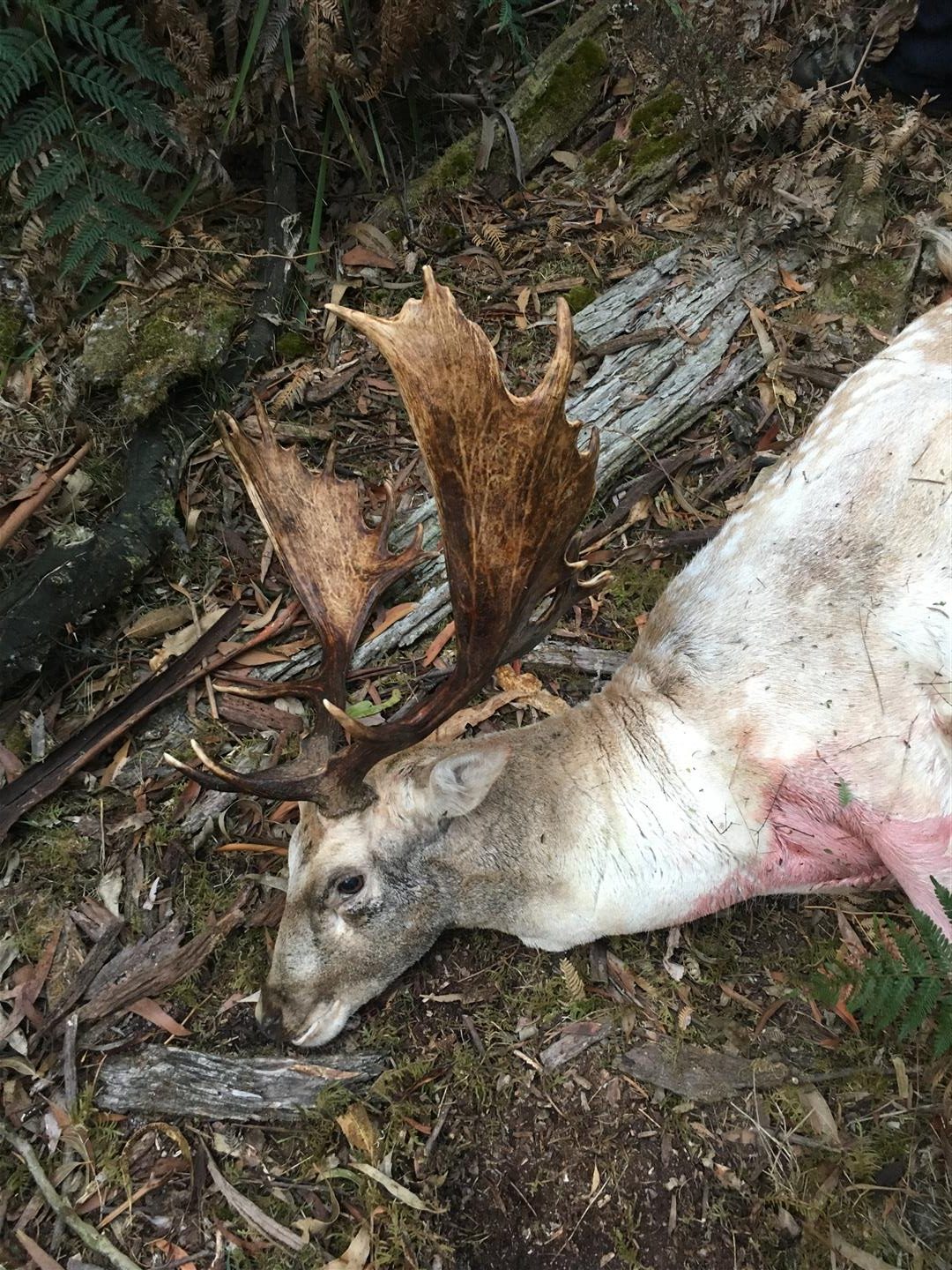 I started to run in a straight line through the forest, hoping to make it to him before the valley dropped off. It felt like everything was moving so quickly; was I moving in the right direction? Was he injured and slowing down? Or was he only spooked and out running the both of us? I stopped to take a quick breath and gather my bearings, and heard branches break under hoof, I turned and ran towards the sound. I was determined that I was not going to lose him. Suddenly I saw a flicker of white in front of me, his white chest moving through the trees. I threw the bolt back and snapped another round down the barrel. As I brought the gun up, I placed one hand against a small tree branch. I saw his chest and head perfectly in cross hairs as he stepped out from behind the tree. I was not going to miss him a second time. The crack went off and I saw him stumble sideways, I knew it was a good, clean shot. Although he was hit, he was still determined to survive. In an instant, we were both running through the scrub again. I saw him make a line for the bottom of the valley, crashing through the trees carelessly as he tried his best to lose me. He made it to the bottom of the valley where I saw him drop. The second shot had done the job.

Andrew and I waited for a few moments at the top of the valley, adrenaline still pumping. We collected our breaths and assessed the situation. We started to make the final approach down. As I slowly made my way down through the trees, I started to see what a remarkable stag he was. The animal’s size alone was impressive, then there were those antlers – a crown above his head. This was definitely the calibre of stag I had been dreaming of for years. This was an epic hunt with a dream Fellow deer stag to match. I really could not have asked for much more.