After a long week, I was keen to pack up the swag and head up the bush for the night with my husband Rob. Arriving at camp I quickly got changed and headed off for an afternoon stalk, the conditions were pretty good, and I knew I was in good country, so I was taking it slow, glassing every few metres. By late afternoon, the wind started to pick up and swirl which resulted in me putting up two hinds and a stag that were only 50 or so metres away from me. With the wind still playing havoc and the light starting to fade I decided to make my way back to camp for a cook up and to prep for the following mornings hunt.

I have been trying to get a 6-point sambar stag for quite a few years now with no luck, so I’ve been on a bit of a mission to make it my goal these last 2 years.

Waking early the next morning, I was keen to get back out there, I had come up with a plan overnight in my head, so I set off on first light.

I was creeping along as lightly as possible, looking through the binos literally every 2-steps I took, searching high, low and wide for any sign what so ever. The weather was absolutely perfect with only the slightest hint of breeze in my face. I had previously seen a cast stag a couple of months earlier and more often than not I see deer in this area, so I was in my proper stalk mode.

Not long later I got the slightest whiff of a deer, so I slowed my already snail pace to even slower, then mid step I heard a noise and literally froze on the spot when I spotted a sambar only 15 metres from me. As I was balancing on 1 foot with way too many noisy twigs around me, I decided to quickly crouch down to get a better look as I didn’t want to lose my balance and make too much noise. I had no idea if it was a stag or a hind, I then 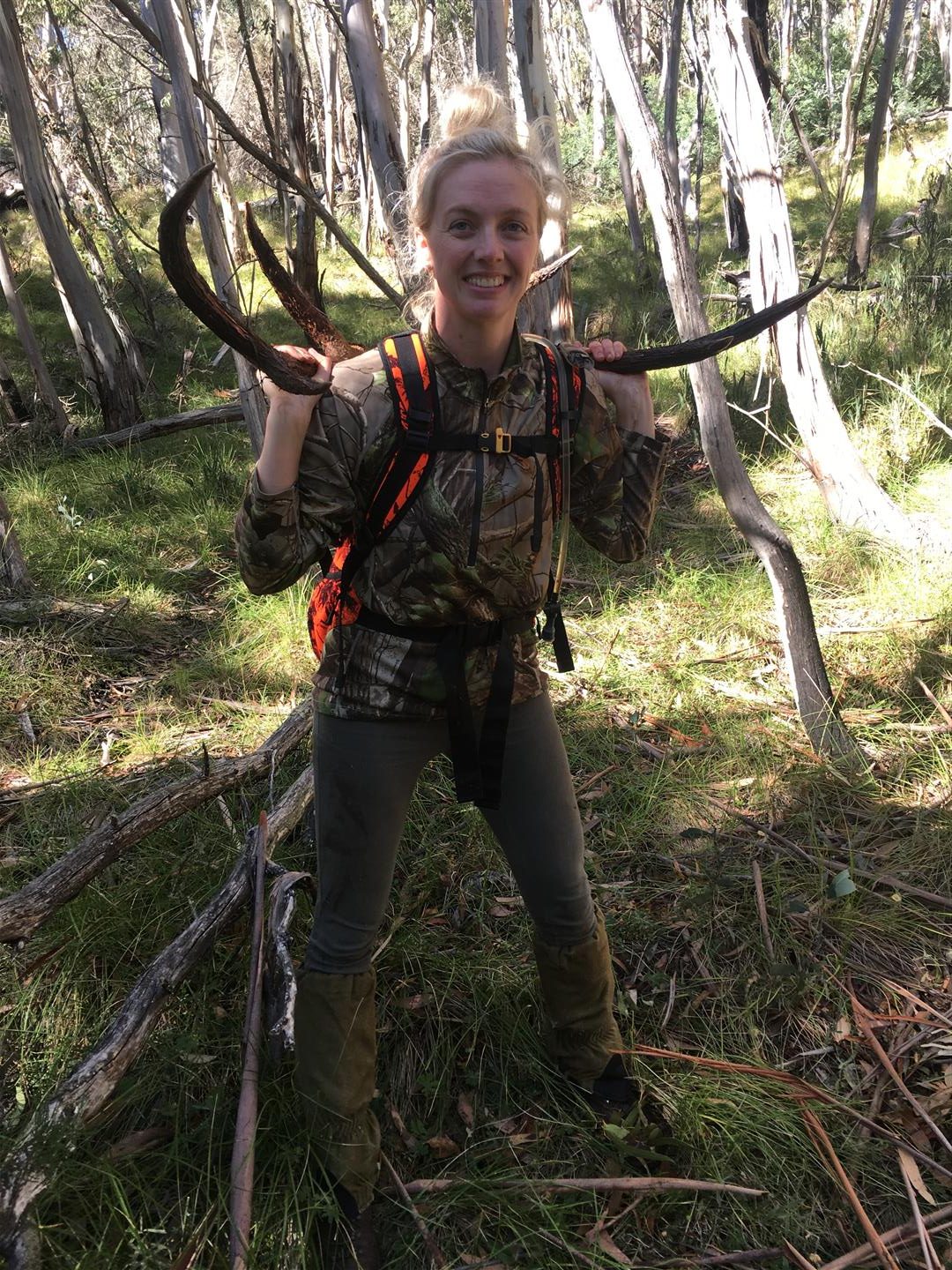 spotted the tip of an antler, so I stood back up as a tree branch was blocking my view and in that split second he stepped out in the open broadside, looking straight at me. I remember taking the shot in that same split second, then he was off running full pelt and before I knew it he was out of sight. I quickly marked the spot on my GPS with shaky hands, it all happened so quickly that I was starting to doubt myself with the shot. I sat down to take a breather, as I knew the right thing to do was to wait for a good 20mins or so before I went looking for him. Rob was hunting a couple of gully’s away from me and with a little bit of service I quickly text him to say that I had a shot at a stag, but he ran off so quickly I wasn’t very confident.

The 20 minutes I had planned to wait out, turned into only around 3 minutes, the not knowing was absolutely killing me, so I set off slowly in the direction I seen him run. It wasn’t long before I was following quite a heavy blood trail, once I got to the top of a small gully, I looked down and could see him on the ground, with his head hidden by a tree. I quickly rang Rob, telling him I could see him lying on the ground and with excitement building, I made my way there as quickly as possible. Once I got there, I quickly counted the points back to Rob, and telling him very excitedly that “I did it, I did it, I did it! I’ve got my first 6 pointer.” I was absolutely speechless, all the hard work I’ve put in over the years to achieve this dream had finally paid off, words can’t even explain it!

After taking some photos and just sitting back enjoying the moment, I sent off a few pics to some close mates before the hard work of caping and carrying him out begun. We arrived back to camp mid-morning and enjoyed a nice cold beer to celebrate as I replayed the story over and over to Rob.

It’s a hunt I’ll never forget and a smile that will last a lifetime!