January 2017 saw a return to the land of the long white cloud to hunt chamois on DOC land. Something I had not done since 2011.

Me and my good friend Rob Templer boarded the Air New Zealand flight in Sydney and discussed New Zealand all the way to Christchurch. It wasn’t our first hunt in N.Z, so we both knew what we were in for. The only concern being that Rob had not tackled the southern Alps for 20 years and the last time I hunted in those mountains I was competing as a professional athlete which was a far cry from the condition I was in on this trip. Ahhh surely we’ll be ok right? 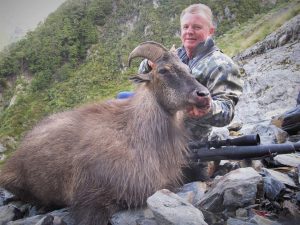 As usual the customs officers and federal police at Christchurch Airport were most helpful and we were soon through customs and waiting for our pick up from our local guide. It wasn’t long before we were on our way out to the Southern Alps with the beautiful Mount Cook as a backdrop.

Our initial plan was to hunt the West Coast and be flown in by chopper but the weather forecast was ominous for the following days. We were on a 4-day hunt and we couldn’t afford to loose a few days so our plan was changed. Rather than run the risk of being hit with a major storm on the west coast while in a tent, we would hunt the sheltered side of the mountain range and we would be climbing from the riverbed to reach our quarry. This was going to be tough.

We arrived late at night to a DOC. hut and set up camp in preparation for the following day. It is always exciting getting your gear ready for the hunt. The anticipation was great and we all enjoyed a quiet beer over a fire before falling asleep. 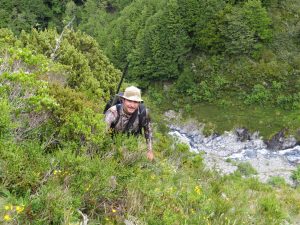 We woke up early on day one and made our way down the riverbed, stopping to glass the mountain faces where the sun gained territory closer and closer to us at the bottom. We knew the first rays of warmth would draw out the animals to the exposed faces where they could sun themselves after the cold of night.
We saw a few chamois and to my surprise some red stag as well through our spotting scopes. We glassed for a while seeing some more does and fawns as well as a family of chamois on a far off face. Then at about 9.30am we spotted a big red stag way off, a couple of kilometres away further up the range.

So it was decided that Rob would move further up the river bed and continue looking for game on some other faces and I was to start my climb for the afternoon hunt and have a go at catching up with the chamois directly above us. 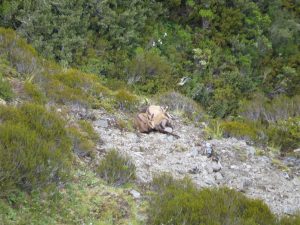 10 hours before. The light was fading and the afternoon shadows had given way to the grey of evening. “Looks like a walk out in the dark for me” I was thinking, just as Alistair turned to look up the mountain behind us. And there not 150m away was the red stag from the morning with long heavy antlers partially stripped of velvet as it was early in the season. He had fed up a draw just beside us and popped out above us.

My first instinct was not to shoot as I first judged him as a 6×5. Something I had already achieved back home in Australia. But as I looked at him through my scope I noticed a small point on the crown of his right antler. Making him a 7×5. It has been a long time goal of mine to harvest a 12-point red stag in the wild and the hunting gods had given me an opportunity as a reward for the day’s efforts. 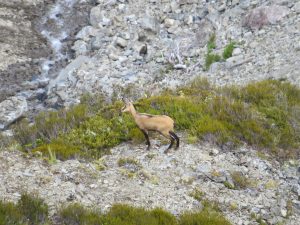 As the red stag fed quartering away, I sent another 180grain pill in behind the front shoulder blade and it exited the far shoulder. After running a short distance, the stag tumbled in to a gutter where he lay stone dead.

As I approached the stag to the sounds of Alistair’s celebrations I couldn’t believe what had just happened. I had no intention of hunting red stag on this hunt and now by pure chance, I had achieved one of my hunting goals that I had set myself many years before. 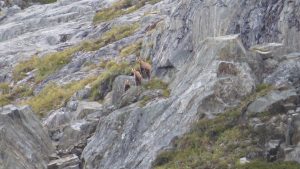 After the obligatory photo session Alistair looked at me and asked did I want to carry the meat or the cape. I elected for the meat as I could load it in my pack and I wanted to use my hands on the ascent for balance. I figured the local would be more sure-footed and less likely to fall to his death in the dark!

It was two very weary hunters indeed, that made it to the riverbed below at about 2am the next morning. I have never been so exhausted on a hunt in my life but it was worth it. The blood sweat and tears that go in to alpine hunts is what makes the reward so special. 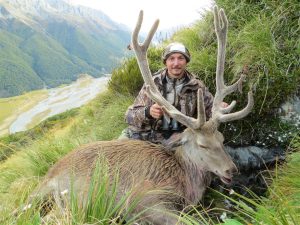 Back in camp I found out that Rob had secured a bull tahr and at 3am in the morning the hunters all celebrated with a bottle of Dom Perignon I had been saving for a special occasion. We all laughed and drank until the silence of fatigue took over and we drifted off for a much needed rest.

Over the coming days more tahr and deer were spotted but nothing better than what had already been taken. Rob continued to try for a chamois but it was not to be on this trip.