We were in North Eastern Nevada with Blain Jackson hunting cats. They had had 30” of snow the week before we got there and got another 26” while we were there. It really could not get any better for cat hunting.

First day we had snowmobiled about 50 miles, cut one small female early in the day and one reasonable male track about 2 or 3 days old. A mob of crows took off at the base of some cliffs. On investigation we found his old kill, with very little left. Blain thought it would be worth coming back in a day or so, as the cat would probably return just to check it out. 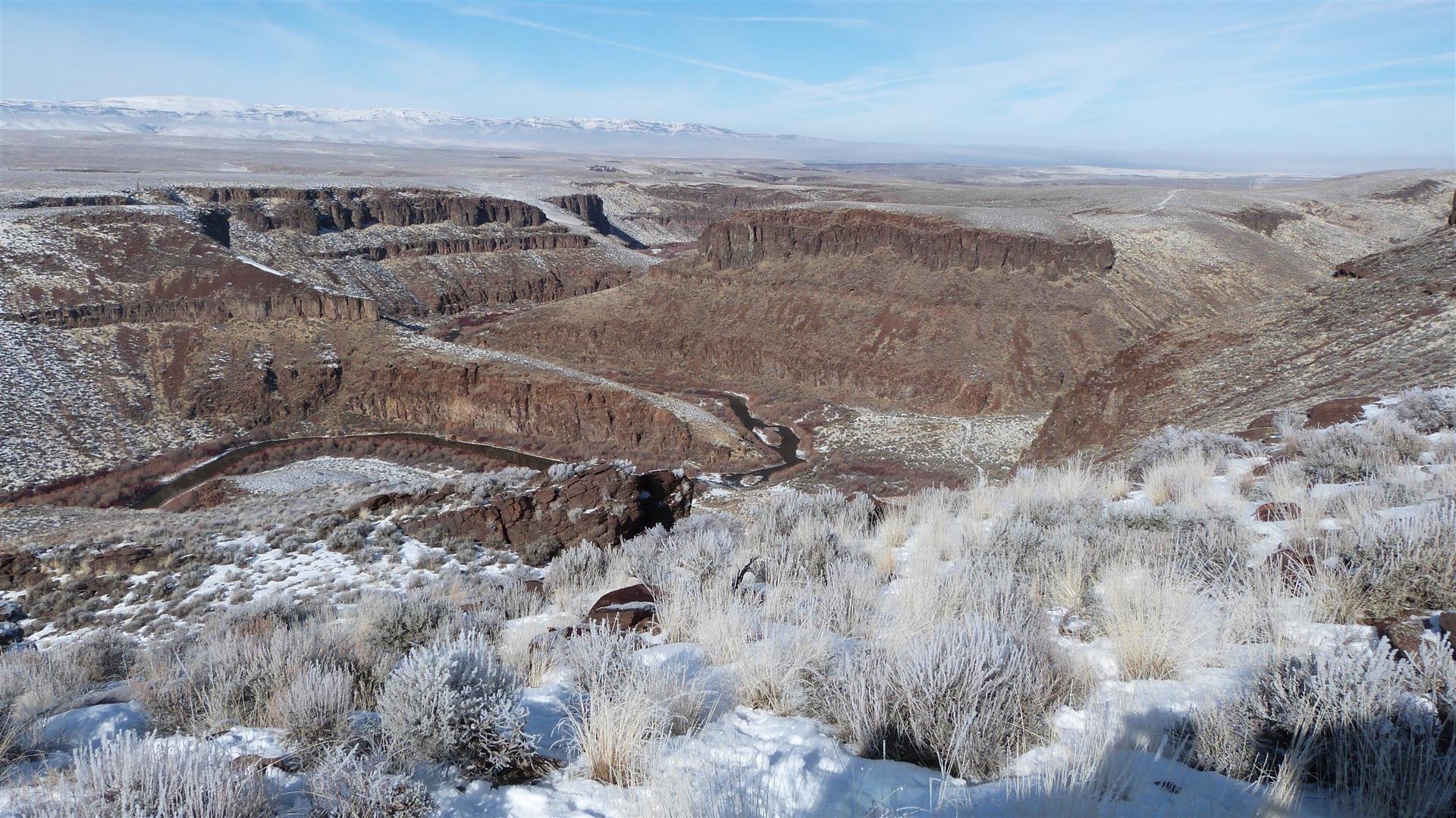 cal rancher to say a lion had killed a mule deer not far from where he fed his cattle.

We located the kill very quickly. Very little had been eaten off the young buck, it was last nights kill. Letting the dogs go, they quickly headed for the highest hills of course. It took awhile to gain the top and look down on a river canyon that looked absolutely terrible for chasing a cat. I did not fancy chasing a cat in that mess at all. We could not find where the cat had gone down into the cliffs. Side hilling and checking for sign we came back down a few kilometres farther north without finding them.

Finally picking the Tom up again at the bottom heading back the opposite way. We followed him heading east alongside a small river and came on another kill a few weeks old. A really nice mule deer buck. We gave up towards dusk with plans to get back to the kill before first light. Nathan, Blains son & Mike joined us. They had been looking for tracks 100 miles away coming in from the Idaho border and had found one very good cat track about 3 days old. This cat we had was too fresh to pass up. Before we had got to the kill the next morning the dogs were off. Straight up the hill we had climbed yesterday. Nathan went with the dogs while we watched on the GPS tracker where they were headed. Great to watch young legs race up the hills effortlessly. Only about 2 hours passed before they had the cat bailed in the cliffs. The very ones I had looked at yesterday and hoped we would not have to go there. Mike and I came down into the cliffs from the North. We had only been going about an hour, when I spotted Nathan’s head down below in the rocks. Just as I saw where he was, he radioed the cat had jumped. The chase was on again. Probably another hour or so and the dogs had him again. Mike asked if he could carry the rifle and I said no. He then asked if he could carry my pack and again I said no.

I said, “Are you trying to tell me to hurry up Mike?” 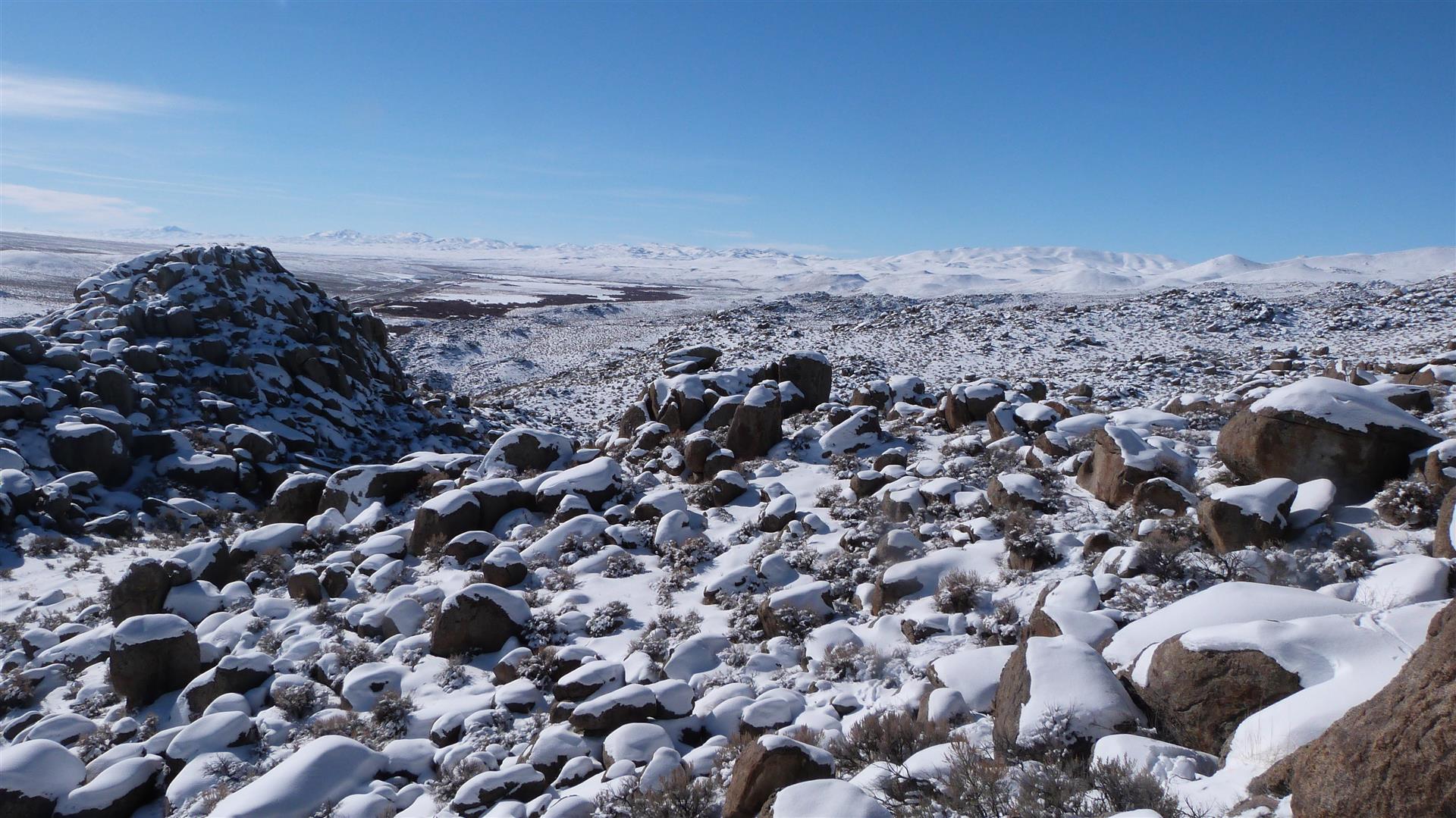 This time the cat held till I arrived, he was out on a point above the river and at the shot he fell backwards into the willows on the river bottom.

What a job that was getting him out of the willows. It was far too steep to try and get him out whole so we skun him there for the haul back out. Nice tom, I was happy with him. Blain suggested we go to Reno for the Sheep Show over the weekend and return to see if we could locate the cat track Mike had spotted; only a bit fresher. Pat was more than happy with that, as Jack Pot has very little going for it.

We based in Idaho to be able to access the very north eastern corner of Nevada. Blain and I did two days of long hauls on the snow machines, averaging about 80 klms a day, they look like they are very easy to handle, but looks are deceptive. In deep snow on the side of mountains it is hard work. The only track we found was a very fresh bobcat and a large one. Saw two cracking bull elk. The snow was too deep and the deer and elk had moved lower for food. We decided to return to the original area. Mike joined us there. Setting out in the dark Mike and I rode the machines for hours. It was unbelievably cold. At one stage very early on we crossed hundreds of deer tracks and even though we went very slowly, it was hard to see all the tracks in our headlamps. One old small female track was all that was seen.

We were heading back to the truck early afternoon when Mike decided to check a small valley. We had not gone a Kilometre when he spotted a cat track. We walked it out for a while as it did not look all that fresh. We had not gone a couple of hundred meters when under a bush was a beautiful track of what appeared to be a nice cat. Hurrying back to the truck for the dogs and Blain, it did not take long and the dogs were doing their stuff. It appeared the track was about a day old and the dogs were working hard to keep on it. We were in a rock pile probably about 500 hectares in area and had to walk the track as the dogs kept loosing it as the cat jumped from rock to rock. After a few hours, the dogs were working an area of big rocks on the side of a hill when they seemed to get very excited. We could not tell the direction properly or the distance in these boulders with everything echoing through the rocks.

Blain was in front, then Mike and me dragging the chain. We were in very large boulders and could see very little. Blain looking to his left said shoot him Rick. I looked where he was looking and there was a big cat on top of 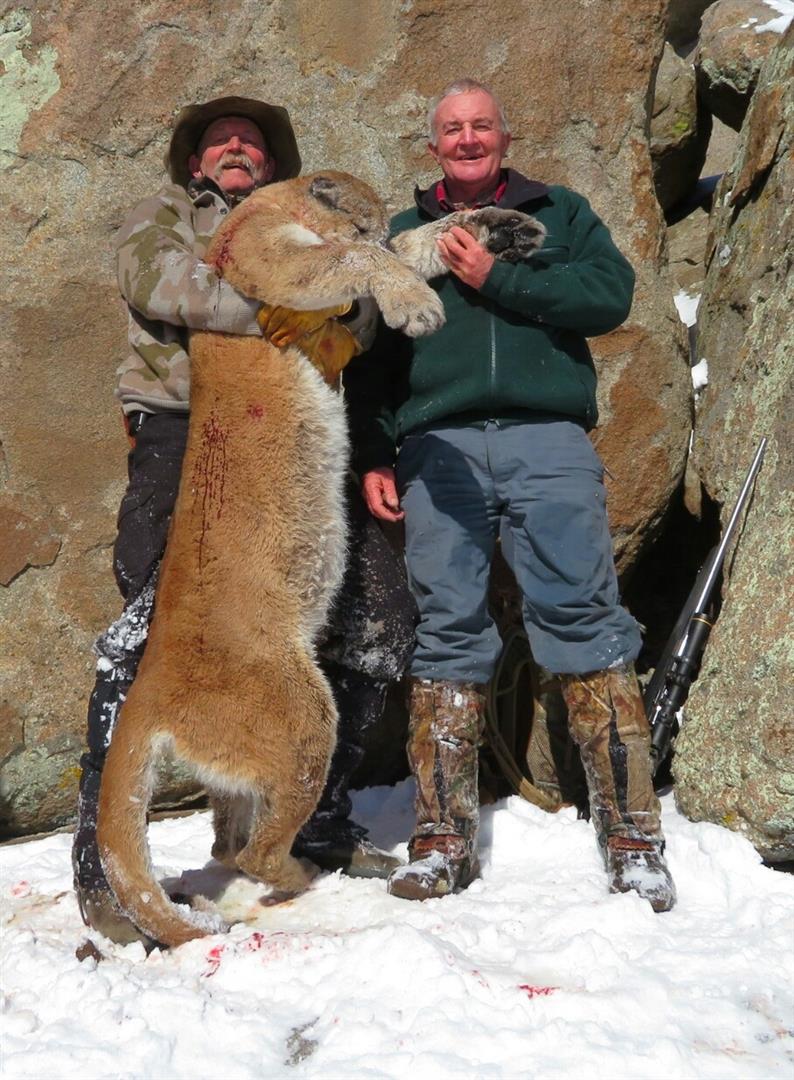 a boulder about 35 metres off. The dogs were really sounding off, but we could not see them.

There was a narrow opening between two rocks, giving us visibility of the cat. I did not hesitate for a second. First shot on the shoulder spun him around, second shot on the opposite shoulder had him fall off the rock. It took Mike and I quiet some time to find as it had slid down a crevasse and under a rock.

It took us a bit to extract him. It was a difficult position and he was very heavy. What a beauty, a really big tom. We finally got back to the snow machines and one dog was missing. Good thing they had GPS trackers or we would never have found him. Trapped in a deep crevasse between boulders. He had lost one eye and deep cuts in his throat. He survived, another dog was cut up about the head and ears as well. That’s how easy it is to get a cat. Well almost, this was my 15th mountain lion hunt. Started 16 years ago and only missed one year.

I hear about all the easy cats, but they did not come my way. I had put in over 100 days and some hard ones, with the odd day/nighter thrown in. This was the most expensive Mountain Lion hunt I think. But what a ripper of a cat to finally have. Don’t know if it was persistence or obsession, probably a fine line, what ever, it had paid off handsomely for me.

Some of the hunts had been marathons, I did 11 hunts in Nevada before this one. Chased a lot of cats but caught none. Before the GPS trackers were on the scene, we walked the dogs, but the cats always beat us, well the dogs really, as it’s their hunt. Usually in cliffs, rocks and mine shafts, dangerous, country in the dark.

One hunt, my last afternoon, we found a reasonably large track. As it was about 3pm, Bill would not have normally let his dogs off this late. As it was my last chance he let them go. His 19 year old son came with me. He was not carrying a pack or anything for an emergency. About 1 o’clock in the morning we were at about 10000 feet, it was minus 25 degrees, we were walking in snow up to our knees, was extremely hard going, as we did not have snow shoes. My companion was falling over and dry reaching, when I decided to head down and try lighting a fire. My legs were in a bad way and I hated to stop, but had to wait for him to catch up. When I saw his outline I would have to grab my trousers down by my calves with my hands and lift them to get going again. I suddenly realised we had left the tree line and we about 6000 feet and into the sage brush. Looking for a spot to light a fire, I saw what I thought was the biggest dog in the world, as I got closer, I realised it was a horse. Approaching it, I crossed a track, so followed it for about ½ a Kilometre and found a cabin. There was no light on, but I pounded on the door and heard movement inside. It was our lucky day, a fellow opened the door and invited us in to a warm up by the fire. When we got the boots off my companion, he had frost bitten toes. When I got my boots off, they were like blocks of ice. I think the snow had been packing up inside the gaiters, melted and ran down into the boots. We were very lucky to come across the cabin when we did. Took Bill 3 days to get his dogs back, I was well and truly home and he called in his next client and they had a cat 20 minutes from the house.

Did three hunts in Canada, first hunt in the Rockies, we treed 5 or 6 cats. Two were on the border line size wise, and would probably normally be taken. I let them go. Second last day, late afternoon we found a track, not just any old track, but a monster. As it was late we would come back in the dark next day. Up about 4am to 8 inches of fresh snow, not a track to be found. 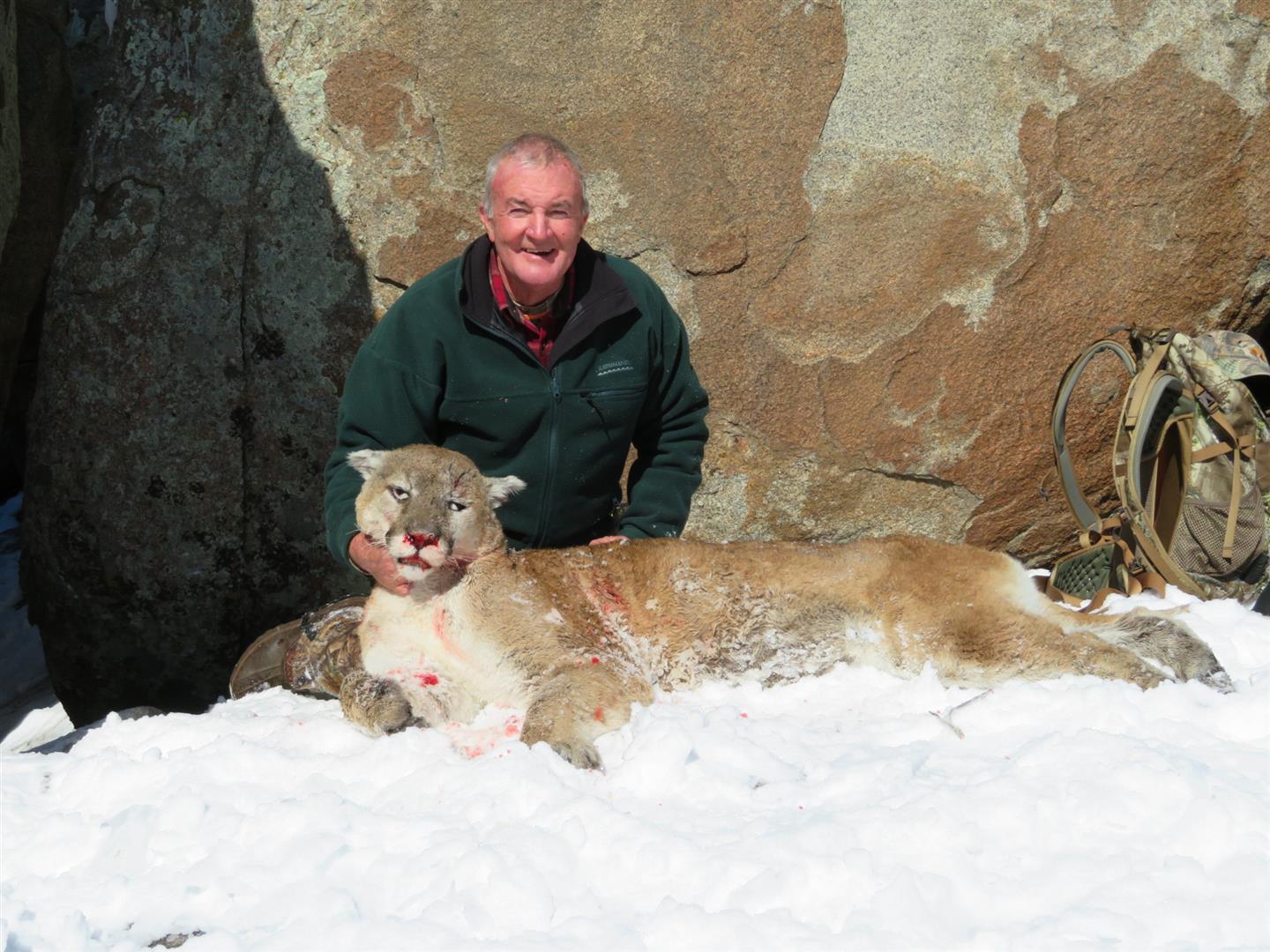 10 days in central western BC, not a track. Another 10 days in the same area, three nice size cat tracks, one went on to another hunting concession, another went on to private land and the last one, the dogs were run off by wolves, and it was a mad dash to save the dogs.

I enjoyed all the hunts, the guides were good and their equipment sound. All dogs were very good. I just did not have good luck till the last hunt.

Pat reckoned it was Herman’s curse. We were living in Scotland in the mid 70’s and Pat had a cat named Herman, even though she was a female. We were going to drive down to India to try and hunt tiger. So attempted to give Herman away. No one would have her, so I had her put down. Pat may well be right.