My season so far has been pretty dismal to say the least. With a failed bighorn hunt, a knee injury halfway up the mountain and weather conditions screwing up the rest. I may have finally broken whatever curse was on me this year.

My bighorn hunt was up in the spectacular alpine of the South Okanagan. Screwing up on that hunt has haunted me and I’ve become sort of obsessed with that region. So I’ve been chasing the big bucks in that area ever since.

Finally this weekend I was able to connect.

I hiked in after work Friday. Snow covered the ground as soon as I cleared the forest canopy. I was making fresh tracks and figured I would have the place to myself. I arrived at camp after dark.

I woke early and hiked to a favorite glassing spot of mine for first light. Probably 3km hike, the difficulty is trying not to sweat as I know my thin Australian blood will freeze as soon as I stop moving to glass. So slow and steady up the mountain. I stop short of my spot to get layered up and get the scope setup to avoid any extra movement later. I spotted a 2 point almost instantly and soon found his doe companions. I figured probably a family. 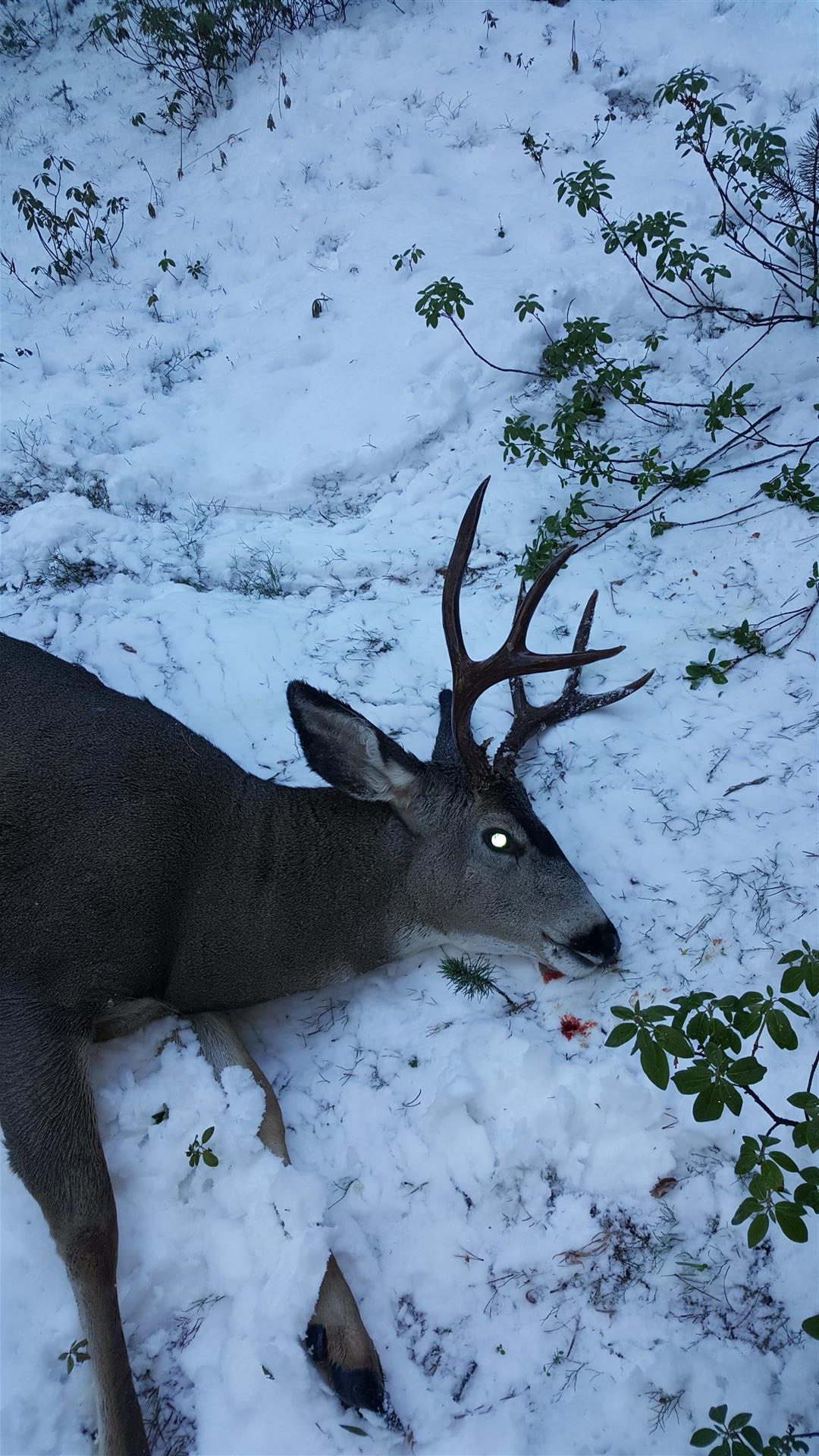 he small buck was gone into the thick stuff within minutes of me finding him. He obviously knew what was coming. I sure didn’t.

As quickly as the sun had risen the fog and cloud followed. The rest of the day was near white-out and snowing sideways. I did spot 14 young bighorn rams grazing like nothing was going on around them. I cut my losses that day and head back early for a good nights rest.

Sunday morning. I decide early that if I am not staring at a decent buck early in the day I’m going to pull off the mountain early and spend some extra time with the wife. I manage to glass 9 deer nearly a km away. One small buck but nothing worth a km uphill slog.

Its about 8.30 and I have had enough of freezing my butt off for one weekend. On my way back down the hill I notice a buck has stepped into my footprint from the mornings hike in. I figure its gotta be a sign so I follow the tracks up a different hillside. The buck zig zagged across an open slope before finally punching back into the nasty stuff. It’s impossible to be quiet with the snow crunching under my feet. My only bit of hope is that the melting snow falling from tree limbs will cover my noise.

The tracks lead to a bed site and lots of yellow snow. Also the tracks seem to be the only ones in the area. It increases my confidence that I am following a buck. Finally the tracks are looking really fresh.

No melt just flattened snow. Then I hear heavy bounding. I’ve spooked the deer. Great I must be close. I follow the tracks to something that confuses me at first. All 4 tracks grouped together and no other tracks nearby. Then nearly 8 feet away I notice the same pattern. Holy smokes. This is the bounding tracks. He was really really close. He bounded away maybe 20 yards before the tracks sneak back around to the original location. Obviously been sneaky and trying to see who is in his bache 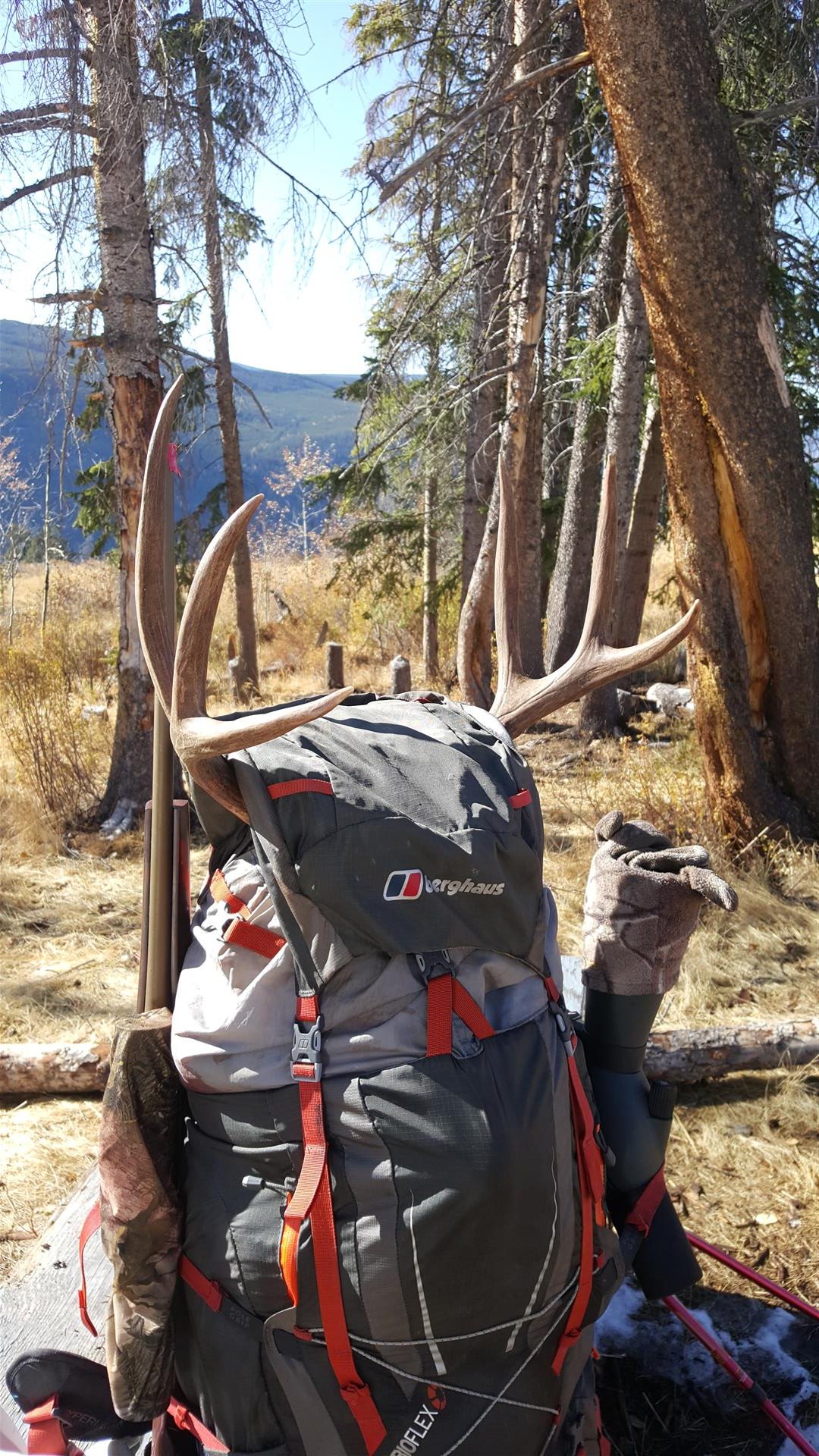 I worked out what the deer is doing and figured he is probably watching me from somewhere so I stop and carefully look for him. And there he is….very close maybe 30 yards. Nearly invisible in the thick brush. I saw antlers and let the lead fly. I figured a 2 point but wasn’t 100 percent sure.

He didn’t react too much to the shot. Just took off down the hill. I racked another round and went to pick up his trail. It wasn’t a hard task. Blood everywhere. The buck went 20 yards down hill and expired by a flat area in the snow. Perfect working area.

I was happily surprised to find he was a beefy 3×3. A very handsome deer. I did the legal stuff then wasted no time in getting him into my pack.

A grueling 13km hike out. My pack broke half way due to the excess weight. A few knots and we were back in business. Anyway it’s good to get a win and even better on a mountain that has defeated me 3 times already this season.