The ghost of Church Wood by Daryl Crimp

The interminable English rain had reduced the Yorkshire countryside to a drab sodden canvas but it did little to dampen my enthusiasm; I was as happy as the pig in the proverbial. The cameraman and I trudged silently along the fence line in the predawn, boots squelching rhythmically underfoot, while each contemplated private thoughts. Mine were a jumble of threads centred on a monster roebuck that had given Peter Carr the slip for the past four seasons, periodically interrupted by the nagging whisper of fate reminding me that I had yet to ‘grass’ an animal in front of the camera, and time was running out.

Leaving the ghostly whitewash of the old village inn in darkness, we nudged the ute down the narrow country lane, tail pipe feathering a white plume in the chilly April air. Carr turned to me and audaciously put the ball squarely in my court. “So Kiwi, what do you suggest we do this morning?” 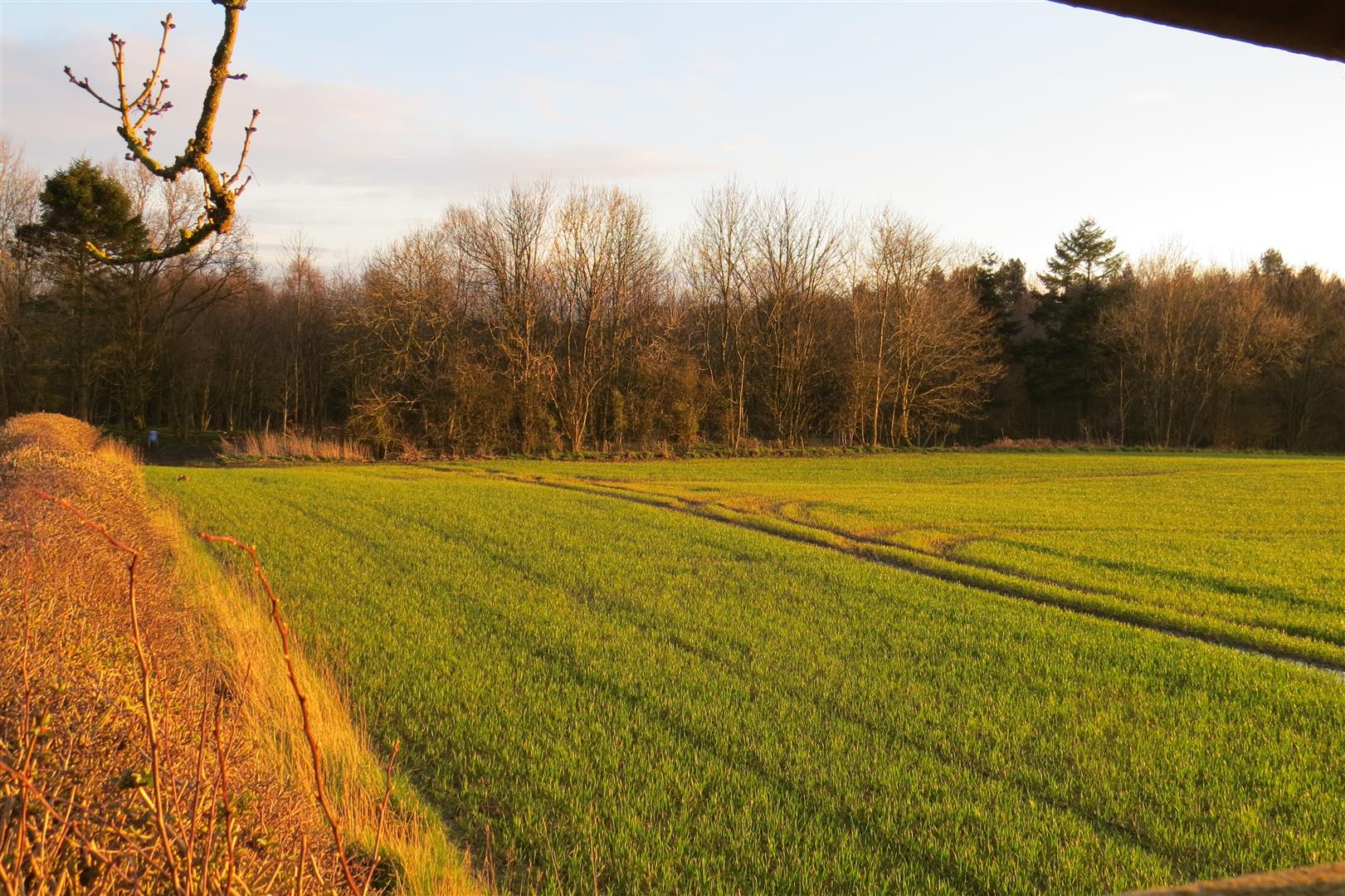 The camera was rolling. It was the start of the roebuck season and we’d hunted morning and night for a week already, but with mixed success. Murphy haunted us early on and we were given the run around something wicked by these ‘fairies of the woodlands’. With so much open space and such small forest plots, one would think it easy to hunt these tiny deer, but think again. Ultimately, I’d managed to shoot a few bucks but no monsters and no money shots for ‘The Shooting Show’. “You are asking me, Carr,” I spat back, “You’re the bloody guide!”

Peter Carr is a top bloke for a Pom, possibly the UK’s most experienced roebuck hunter, and a good man to poke shit at because he just pokes it right back. He is also managing editor of UK’s leading magazine group, which publishes the country’s top hunting mag, Sporting Rifle, and he hosts the popular internet TV series, The Shooting Show. “Stop whinging Kiwi, you’ll trip over your lip!” I countered with thespian flare, “Take me to your biggest buck, Carr!” 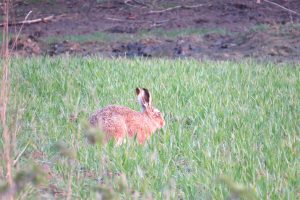 At that, he swung violently off the road, through a gap in the hedge, and bounced the ute down a rutted muddy lane. The tale then unfolded of the magnificent roebuck that haunted Church Wood; it was part animal and part ghost, because Carr only ever caught glimpses of it and, in four consecutive years, had never settled the crosshairs on it. He figured that it was that old now it was probably going back and it was a long shot that I’d even see it, but we had to try something to dramatically alter the roll of the dice.

The cameraman closed the gate behind him while I climbed the ladder, settled into the high stand, made ready my Merkel Helix 30-06 topped with a Swarovski scope — nothing but the best kit — and identified obvious shooting lanes. I was presently joined by the cameraman, who set about filming setting shots, cut-aways, b-roll, and nature cameos such as the little red breast that alighted on a moss-covered stump and sang to an audience of none. A grey squirrel nipped and flitted about the bough of an ancient oak tree and the little forest settled around us. 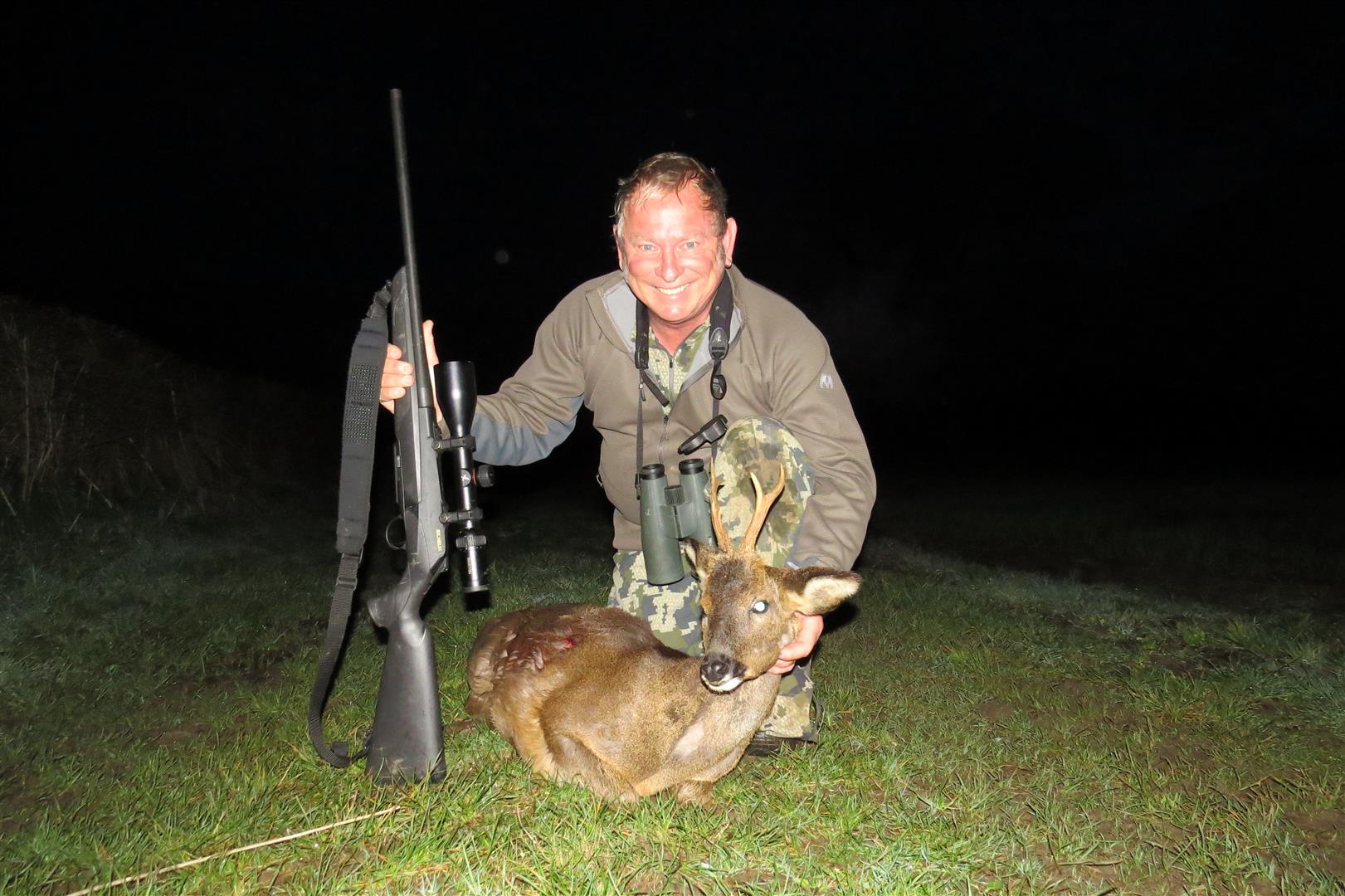 Silence reigned now and the cameraman wasn’t there: absolutely no communication and minimal movement —I drifted into deep hunting mode, cocooned in total focus and calmed by the state of heightened awareness. You have to do this if you want any chance of getting the jump on these canny old master bucks — pull out all the stops.

I have a methodical system of scanning the forest from a high seat: I cover a 180 degree field of view with the binoculars, but in three distinct fields of view, distant, middle, and close in. I scan slowly from left to right, rest, refocus the binoculars, scan the mid field of view from left to right, rest, and repeat the procedure close up — even though I can see clearly with the naked eye. I then close my eyes for 30 seconds to rest them, and then I repeat the whole charade again but in reverse order: close up first and from right to left. 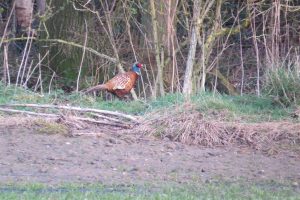 The use of binoculars for scanning the bush does several things: it creates a depth of field that offers better definition, it helps focus the mind and makes it harder to day dream, and it magnifies small irregularities in the landscape and accentuates tiny movement such as ear flickers. Good quality glass like Swarovski is essential for best results, but you also need to draw on other sensory triggers such as sound, peripheral movement, and intuition.

In this case, intuition came riding a horse called Nagging Thought. It troubled me that this buck could consistently outsmart a veteran stalker like Pete Carr, therefore, how could a novice like me hope to get the drop on it? It niggled me that, to outfox Carr, this animal must behave quite differently to its brothers. Then it dawned on me; this buck was a ghost because it had learned that to survive, it must be unpredictable. 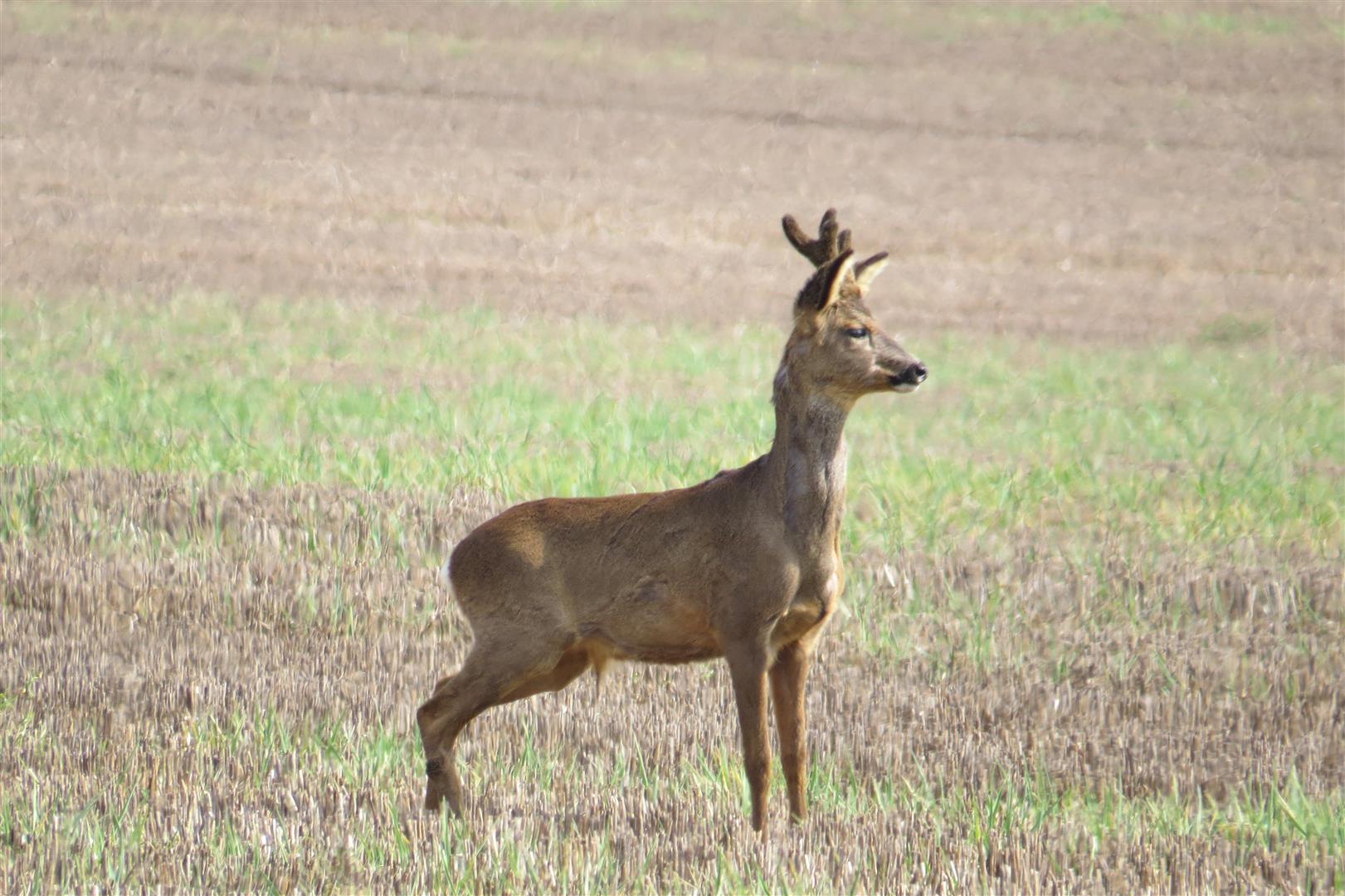 I upended the paradigm by which I hunt and whispered to the cameraman: “This bastard’s going to come from behind!”

He shook his head adamantly, so I went about glassing but could no longer focus; Nagging Thought was galloping across my brain. I kept looking behind me but there was nothing there, except a well defined game trail weaving amongst the blackberries. I had a feeling I was being played but nothing seemed out of the ordinary.

Then; the cameraman frantically grabbed at my thigh as he fumbled with his camera and I briefly wondered just what ‘type’ of movie I was about to star in. Determined not to make any hasty movements, I froze and let my eyes do the walking, and my periphery betrayed the object of the cameraman’s excitement. Out to the right and slightly behind, stood a magnificent roebuck; the best I’d ever seen alive in the wild. He was staring directly at me but, at the cameraman’s frantic actions, its body flickered and tensed. There was no point in continuing with my intention to slowly raise the rifle and bank on a measured shot; this buck was about to take flight. 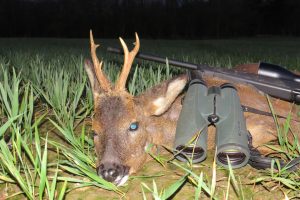 And it did. In a kaleidoscope of events, the buck bounced across a ditch and darted deep into Church Wood. The cameraman cursed as he tried to track it with the camera and I threw the Merkel to my shoulder, instantly picking the roebuck up in the clear pool of Swarovski crystal. Nagging Thoughts whinnied and reared: would the cameraman capture the kill shot, should I wait for him to catch up, and, two steps and the buck’s gone. But this time fortune shouldered Murphy out of the way and the buck hesitated at the base of an old oak tree, turned, and walked back two steps. The crosshairs settled. ‘Shit, there’s a branch hanging between us!’ 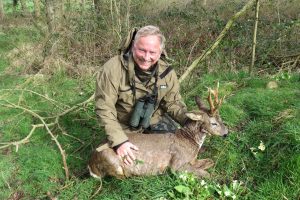 I raised the crosshairs a tad and touched off at the base of the neck. Shit. The branch flicked at the impact with the 30-06. In that split second where time expands into a gulf, I felt sick to the stomach that I’d cocked up, worried I was going to look a fool on TV, and then watched the roebuck execute a slow-motion somersault in the background. Thank heavens I had the punch of the 30-06! Then I turned and looked at the cameraman. He looked up and smiled. That was all I needed to know. 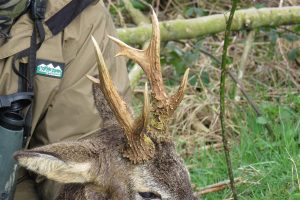 The buck was indeed a monster, and in decline. He was old, with moss growing on his antlers, and cunning. Backtracking later, we discovered he’d slipped off the game trail 50m behind our stand and skirted wild blackberries so that he flanked us to my right; something you wouldn’t normally expect. He’d been aware of me the whole time.

The monster buck of Church Wood ultimately scored Bronze Medal but, to me, he was pure gold; the best I’d grassed to date, a magnificent animal, and the biggest to be caught on camera for The Shooting Show. A little luck goes a long way when courting the fairies of the wood.