Wop and Neale called in to our place on a hunting trip to Dargo in 2008. After showing off a big set of cast antlers we’d found in the paddock that morning they quickly decided to have a hunt here. With a camp established it wasn’t long before a phone call came to “Bring the truck to pick up a stag”. A nice 28 inch stag was on the deck. This was the first one I had seen close up. Many trips followed and during one of these Wop reported he’d found a great wallow. Their enthusiasm for chasing Sambar was catchy and I decided to upgrade my old 270 Winchester and see how hard it really was. Since then ten years of hunting an area of about 1000 acres of heavy bush have proven how difficult that task is and how spot on Wops declaration of a “great wallow” was. That spot has a combination of terrain, fairly predictable air movement and perfect Sambar habitat that all occasionally favour the hunter. Five stags so far, all taken within about twenty meters of each other. Now for stag number six. 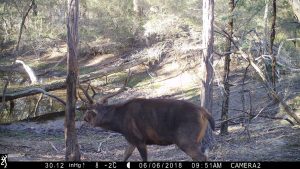 The Stag appeared on my trail camera in May 2016 at the spot we named Wops Wallow. He had a wide spread and some ear notches in his left ear. He disappeared after a couple of visits. Then in May 2017 he made another brief appearance on the camera. It had to be the same animal with a wide overspread head. I tried hard to find him, making numerous trips to that spot, with no result and I gave him up as probably dead. 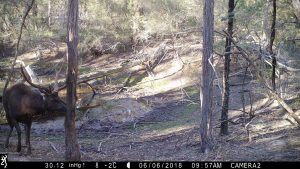 Early May 2018 and he was back. The Sambar Hinds have young at foot and are very attractive to a stag at this stage. I emailed a couple of photos to my mate Neale who was somewhere on a Simpson Desert crossing. Two trail cameras had picked the stag up several kilometres a part, one was at Wops wallow. Every possible evening was spent on a stakeout. Overlooking a game trail or at the wallow. One handy stag was passed up, a few hinds watched undisturbed, even a spikey asleep, but no big stag. I was beginning to think the stag had left for another 12 months. 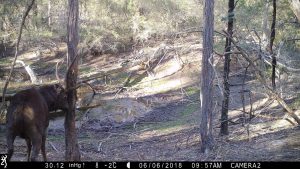 A phone call came from Neale who was back in phone range, in Port Augusta, have you shot that stag yet? He looks at least 30, you have to shoot him! I gave the negative response and Neale said I’m on my way.I stayed out of the main gully, after removing a couple of trail cameras, in an effort to avoid spooking the stag. Only using the cliff lookout, where I had a cleared track in and a good shooting lane. The wallow had dried up and there was no activity, it looked like the deer had moved to a better feeding area. There was a good chance the Hinds had been serviced and it was all over for the season.

A week later on the 22nd of June, another phone call came from Neale, I’ll be there by 3pm! He convinced me to give it one more try. We decided on two possibilities and split up to cover more ground. I went back to sit and wait overlooking Wops Wallow. Neale covered an area of bush near a newly sown ryegrass paddock a couple of kilometres away. I thought my chances were slim however this spot had a proven record of stags visiting while circulating around their territory. The cliffs each side of the gully naturally direct any travelling Sambar onto a small grassy flat with a wallow which was just freshened up by a shower of rain. 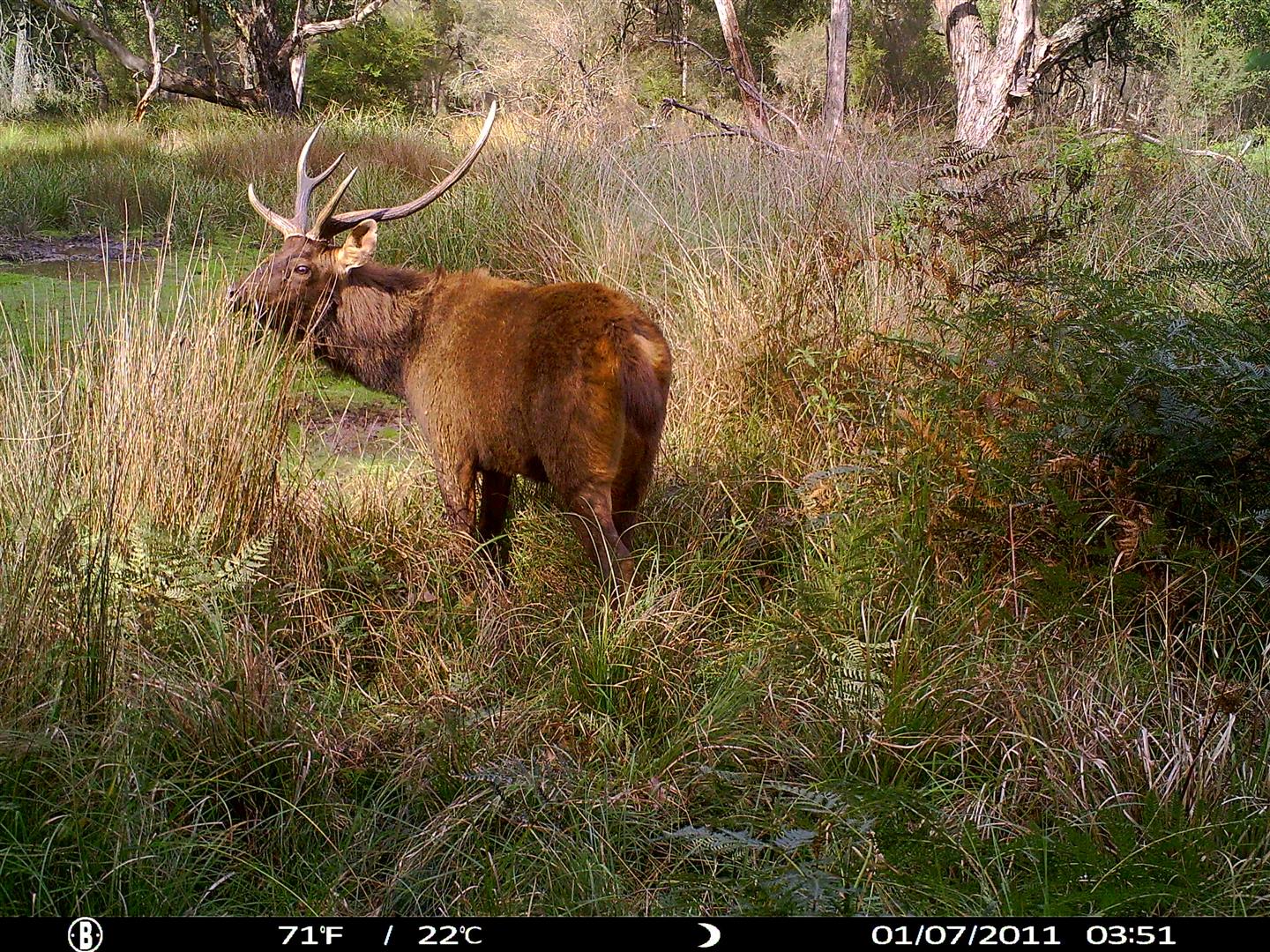 About 4pm. The rock I was sitting on was freezing and I was thinking someone should invent an insulated cammo seat when there was a flash of antler and some cracking of sticks below my lookout. The antlers completely disappeared into a thicket of scrub, only showing white for a split second. The direction the stag was taking was towards an open area, if he kept going. Seconds passed and no stag. There was no time to fiddle with the Binos as the chance of a shot would be fleeting, if it came. My vantage point was high up, 110 meters away and he shouldn’t have winded me but doubt crept in. The dense cover of Blackwood’s and scrub had many hidden escape routes. So I waited with eyes and ears straining.

The next bit happened fast, breaking cover below me was a magnificent stag, head up, striding rapidly, he was broad side on and unaware. The only clear shooting window was a gap between two trees, ahead of the stag. Safety off, two quick breaths and his shoulder was there in the cross hairs. At the shot he continued on, only faster, as though unhurt. Following with the scope there was no chance of a second round. Then came the sound of heavy branches breaking and a brief glimpse of hooves and legs thrashing. It was clear he’d gone down, however drummed into me were Neale’s instructions, watch, listen and wait. 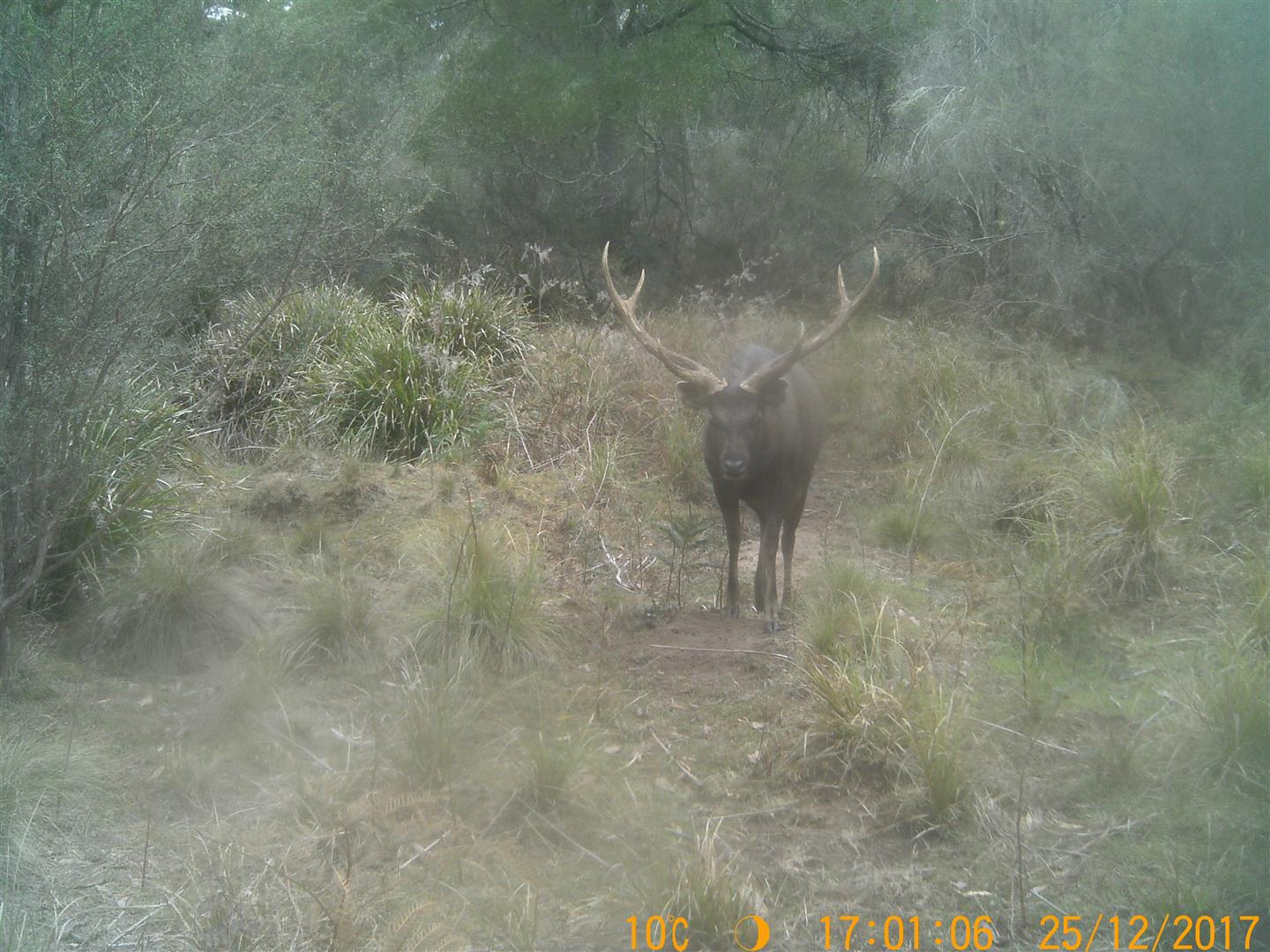 Instead of rushing down I waited for silence, picturing the direction of the last sounds, then rang Neale, who was watching some Hinds and young ones at his spot. The conversation went something like this. I’ve got him but can’t see him; his feet were in the air. You’re kidding, don’t go in yet, give
him five, I’m on my way.

Climbing down the rocks to the gully floor the nerves started to kick in. After a short search I spotted an unnatural black shape sticking up like a tree stump in the tussocks. There he was, unmoving, with his antlers buried in the dirt and nose in the air. What a magnificent animal, I felt huge relief that our paths had finally crossed and he’d gone down cleanly. While I waited for Neale I back tracked 50 meters to the spot the shot connected. Two bright blobs of lung blood and a heavy blood trail lead back to the stag. I’d missed this in my haste earlier. The 30.06 Barnes 168grain TSX driven by 59 grains of AR2209 had gone clean through from high going in to low coming out. These hard pills certainly do the job. 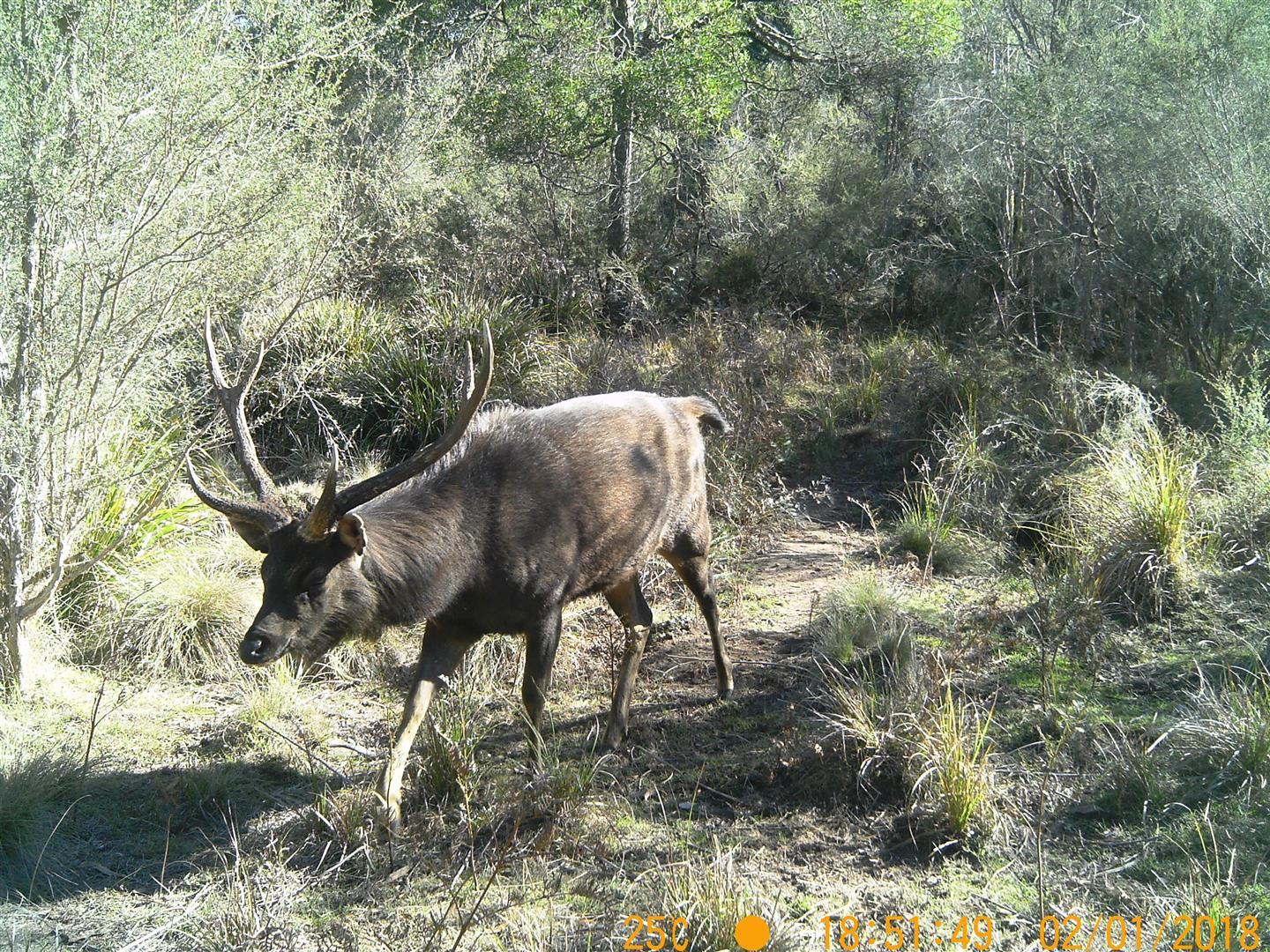 Neale was crashing down through the thick scrub by then, we met up and it took the two of us to roll the stag over. What a terrific heavy set of antlers and shiny immaculate condition. Sure enough he had the ear notches in his left ear; this was the stag we’d been chasing for years. We had time for a few photos and a measure up, 30 long by 38 wide, with 10 inch coronets. As Wop used to say – there’s only one way to find out how big they really are and that’s to measure them on the ground. Not long out of velvet, heavy curving brows, this is a real trophy.

A later check of the one trail camera left in this spot showed the stag visiting on the 12th of June and not returning until ten days later when his good run ended.
Wop would have approved.