Deer of the World Uncategorised

Hog deer (Para deer) traditionally range from Pakistan through northern India, to mainland Southeast Asia. This includes much of the Indo-Gangetic Plains of Pakistan, northern India, Nepal, Bangladesh and Southwestern Yunnan Province of China through to western Thailand. They of course were very successfully introduced to the Gippsland coastal region of Victoria, Australia and to a lesser extent to Texas, USA and South Africa. They also inhabit Sri Lanka where there is quite some conjecture as to whether they are native or introduced from India (there are many conflicting reports regarding this topic and I suspect it may never be definitive). Recent study, in my preparation for visiting Sri Lanka, determined there are very few Hog deer remaining in that country. There is a breed and release program being undertaken just 20 kilometers northward of Galle on the south coast of Sri Lanka however the numbers there are reportedly so low I considered it not worth-while visiting. Local poaching for meat is most likely the cause of population decline.

Mayze, R.J. and Moore, G.I. 1990 in their excellent Australian book ‘The Hog Deer’ very concisely detail the introduction of Hog deer to Australia. Their thorough study of records revealed that (prior to their liberation) between 1861 and 1864, seven Hog deer arrived from India while six arrived from Ceylon (Now Sri Lanka) while an additional two could not be positively retraced to their country of export. While previous literature (including mine) detailed the first liberation site as Cape Liptrap in 1866 (and there are records from where the basis of this information was obtained), this report was incorrect. Mayze and Moore determined that the original release site was actually Opossum Creek in Corner Inlet on the eastern side of Wilsons Promontory just to the west of the jetty at Port Welshpool. This release took place during the week of 10th October 1865 and by 1867 it was reported by a the Harbor Master at Port Albert that Hog deer were on Snake Island and doing well. There were a couple of further limited releases to more distant and not ideally suited locations, hence the first release site detailed by Mayze and Moore is where the origin of Victoria’s Hog deer populations commenced.

Indian Hog deer were reintroduced into Thailand and it appears from recent photographs and study that this is one of the most successful recovery regions within their native range where they are endangered. They have been protected and have multiplied in specific Thai National Parks where access is not authorised to the general public (in the wildlife’s best interest). Access can be obtained only when a person has special interest in studying them and has been granted access after applying through an approval process. Here the populations are strong with healthy antlered stags (some images of these have been obtained and accompany this article).

Australia is most fortunate and has the most significant Hog Deer population outside their native range. Therefore on the world stage it’s a crucial insurance herd in the survival of the species. While hunters cherish the fact that Hog Deer are available in Victoria along the coastal belt between Tarwin River and Point Hicks, long-term illegal hunting has occurred. Reduction of their numbers has been performed within national parks and there is a larger, ever-present looming threat from Biosecurity. Biosecurity, a division of the Department of Environment and Primary Industries has recently commissioned (2016 Report) the Arthur Rylah Institute for Environmental Research (ARIER) to investigate the historical and current wild distributions of deer in Victoria (Remember Biosecurity is the department that has implemented laws throughout the state of Queensland with objectives and targets to kill all deer. The QLD Biosecurity laws place the practical objective of this responsibility clearly in the hands of everyone who comes in contact with deer including landowners, council municipalities etc.) The ARIER report to Biosecurity states in their summary that: Introduced deer species can have negative impacts on agricultural and environmental values.

While ARIER acknowledges some deer species are also important game animals they also state: From both biosecurity and game management perspectives, there is concern that deer species are expanding their Victorian distributions through natural and human-assisted dispersal, increasing the biosecurity risk to Victoria…

Hog deer are one of the most actively managed game species in Victoria. A license allows the taking of one stag and one hind per hunter per season with the requirement to present all harvested deer to a designated Checking Station within 24 hours of harvesting. Biological data on the deer is then collected for future management use. 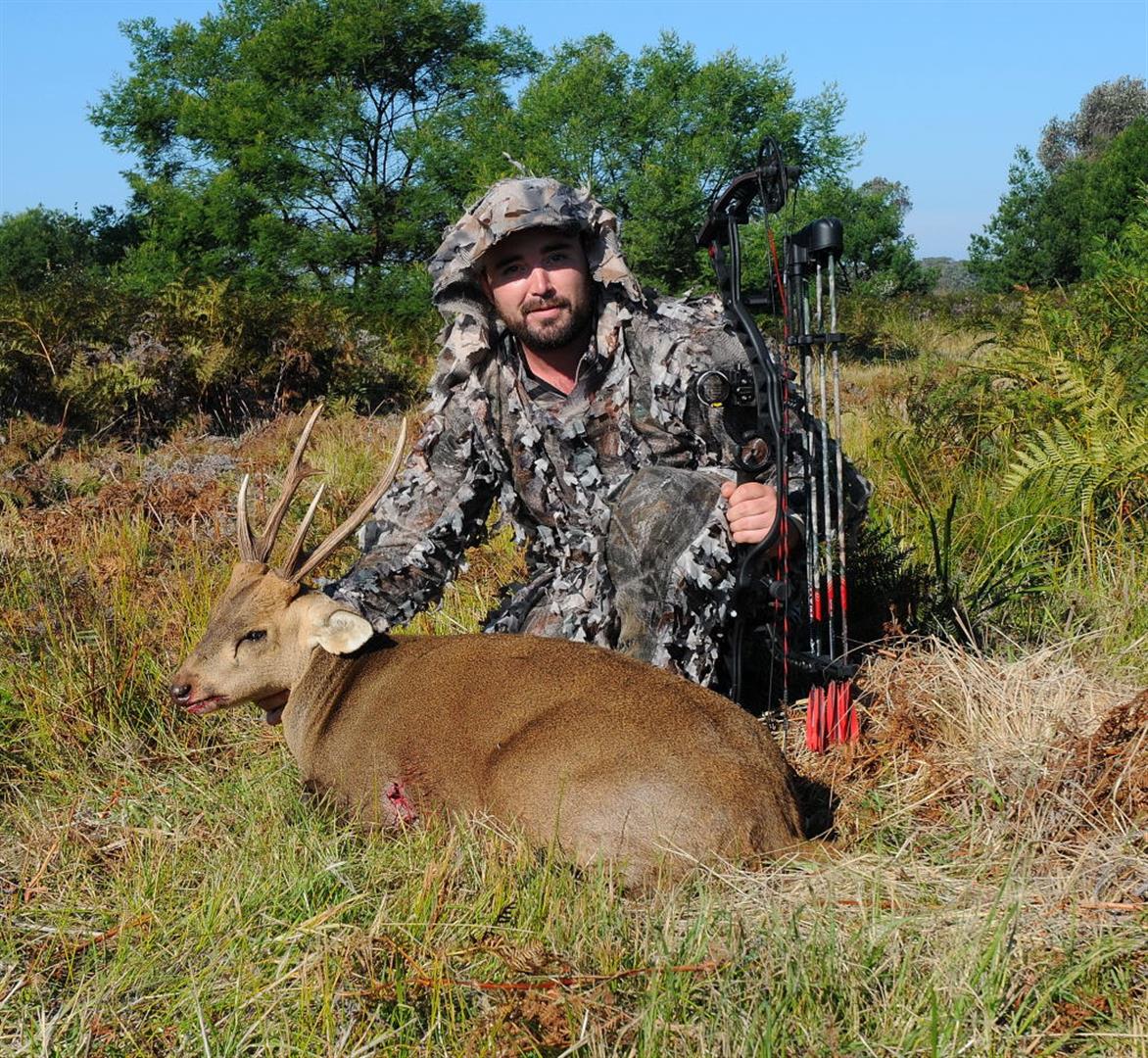 The 2017 Victorian Hog Deer harvest report provided by the Game Management Authority details a record year with 1,043 Hog deer tag packs issued to hunters. The total recorded number of deer taken was 164 (134 Stags and 30 hinds). Fourteen deer were harvested from the Blonde Bay and Boole Poole ballots while a further 40 were taken from the Snake Island trial ballot. These figures show the significance of these three important game management reserves as almost one third of the entire state’s-take was derived from them. The balance of the deer-take is derived from Sunday Island, private land and public hunting areas. Hunters wishing to enter the Hog Deer Ballot can do so through the Blonde Bay Hog Deer Advisory Group that conducts a ballot to select hunters for Blonde Bay, parts of Boole Poole Peninsula and for a second year on Snake Island. All hunters who enter the ballot automatically go into the draw for all three locations. Entries fees for the ballot are just $15- and hunters are encouraged to participate for their chance to obtain access to this valued species.

I believe hog deer are not one of the most naturally alert deer compared to some of the other super–alert species. They prefer living close to water and swamplands along the fringe of dense thickets of rushes, tea tree and mixed forest and feed predominantly on grassy clearings and improved grassland where they can very quickly escape into close dense cover. In areas of moderate to high hunting, one of the hog deer survival-traits are they show an instant dislike to ground scent left by humans. This is one of the main mistakes made by inexperienced hunters who commence hunting by walking about over feed areas while looking for deer. This will have the detrimental effect of driving deer into dense cover and changing feed habits where they become more nocturnal. It’s way more productive to study feed areas or games trails previously and wait at chosen ambush sites when hunting commences. Minimising walking over intended hunting areas is a must! Both ground ambush sites and high stands are successful but high stands provide clearer more expansive views, especially into partially restrictive cover. They show a liking to tussock cover, ferns and any flora that provides partial screening and will often travel through these habitats to reach feed areas. Waiting morning and evening overlooking the edges of feed areas is a most common hunting practice however building high stands overlooking game trails in the thicker stuff between resting locations and feed areas is a very successful way to catch out an older more wary deer. Hog deer particularly dislike windy, cold weather so this should be taken into consideration when planning hunting.

It’s not possible to study Australian Hog deer without mentioning Sunday Island that is a standout in Australian deer scenes. Sunday Island is a privately owned island situated in Corner Inlet (close to the original Hog deer release site) and in the close vicinity of Port Albert and Snake Island. It is owned by Para Park Co-operative Game Reserve Limited, which commenced in 1965, and has a maximum membership of 210. The original aim was to preserve the island habitat for a game management and hunting area particularly for Hog deer. Hunting is available to members only. The membership is actively involved in game management and consequently their season is further extended than the statewide hunting season. For anyone interested in joining – Sunday Island Para Park Co-operative operate a current website where positions for new members are presently available.

Hog deer are one of the smaller deer species with stags standing approximately 70cm tall at the shoulders and weighing around 50kgs. They are a sturdy deer that carry their head low when startled and making their escape. Their habit of running low and ducking under and through dense vegetation, hog-like, is from where their name originated. The hinds are considerably smaller standing about 61cm tall at the shoulder and weighing approximately 30kgs. The antlers are typically three tines per side but its not unusual for them to have multiple tines. I have guided an exceptionally large ten-point one that was very even, 15 ½” long with five points per side. Trophies of 13 -14inches in length are very respectable representative trophies of the species however anything over 16” has always been regarded as an upper-level trophy. 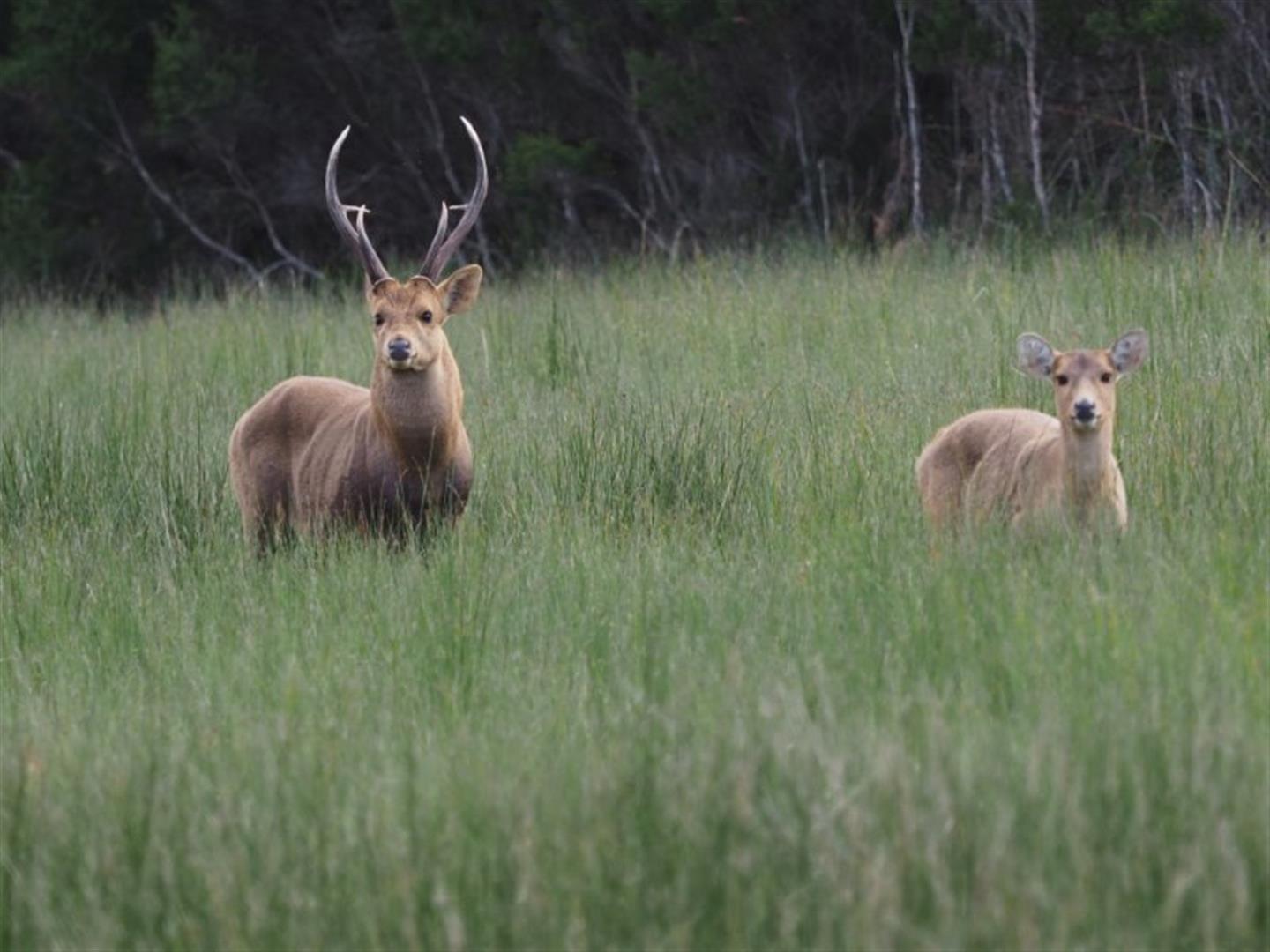 Further to the Hog Deer (Axis porcinus) there are two additional, very similar, but accepted separate species namely the Bawean deer or Khules deer (Axis kuhlii) of Bawean Island and the Calamian deer (Axis calamianensis) of Calamian Islands each situated in the Philippines.

Anyone wishing to further their knowledge on this game species is recommended to purchase Mayze and Moore’s outstanding book on the subject, “The Hog Deer,” available through the Australian Deer Research Foundation Ltd, Box 454 Croydon VIC. 3136 Australia. ISBN 0 9593438 6 5