Pere David’s Deer, also known as Milu or Elephure, is endemic to China and is one of the worlds most interesting deer species. It prefers swamp habitat and predominantly grazes on grass and is regularly observed standing deep in water, feeding on aquatic plants. Currently it mostly survives in captivity. The deer once roamed widely throughout China and the earliest evidence suggest it was present throughout Manchuria. By the 1860s they were close to extinction with the only viable population remaining in the Emperor of China’s Imperial Hunting Reserve, which was a large walled and strongly guarded preserve in Nan Haizi. This has been the norm for many valued game species, where the noble-elite, especially throughout Europe and Asia have saved and protected them for their personal hunting which has ultimately spared them from indiscriminate slaughter by peasants, mostly for food. 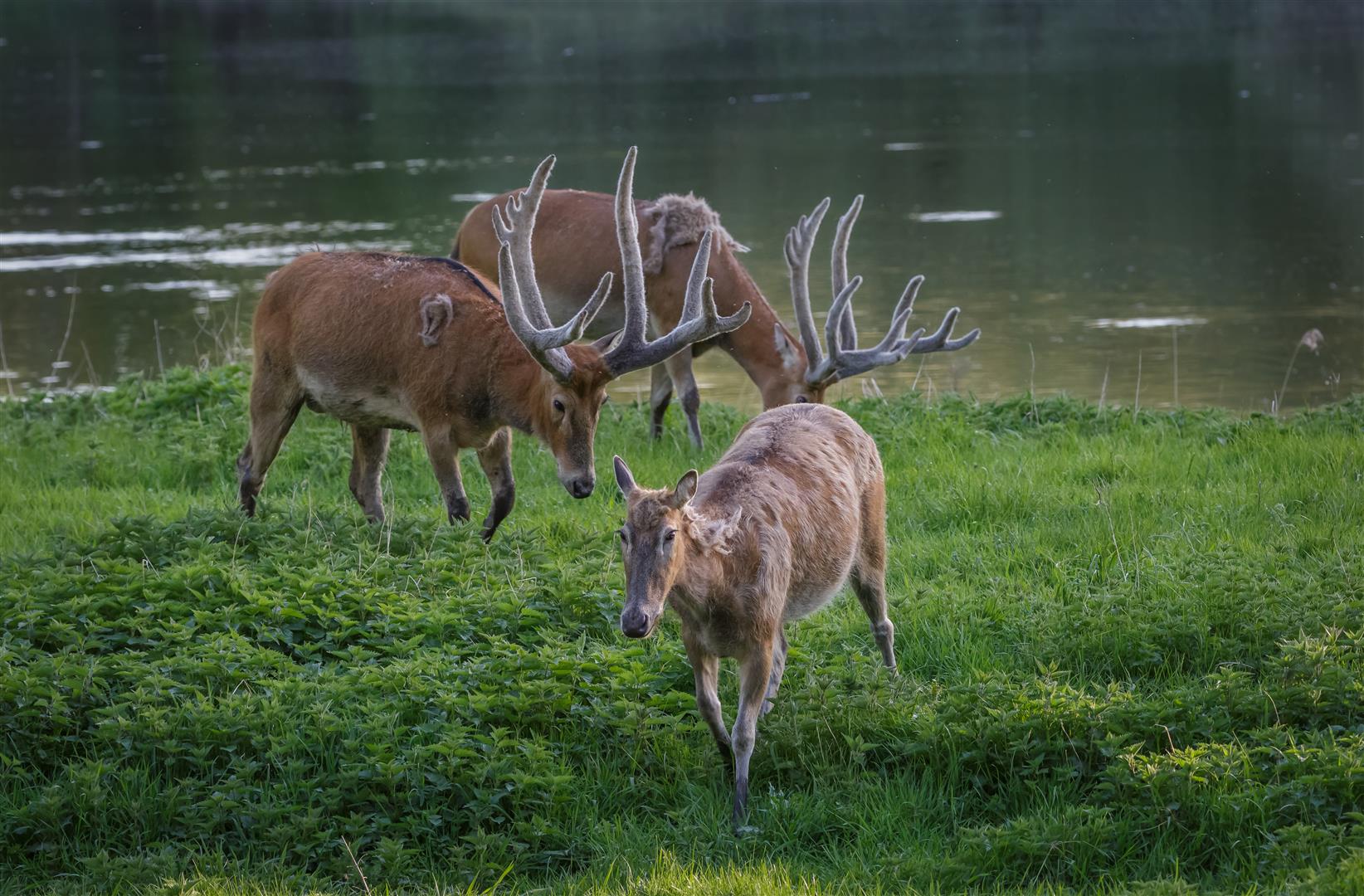 A French missionary, Pere (Father in French) Armand David, whom the deer would later be named after, first discovered them in 1866 when he obtained a singular, illegal sneak-peek into the Imperial Hunting Reserve. During this period this was the sole population in existence. He brought them to the attention of the western world where this led to a minor craze where people were wishing to obtain them for zoos. He then devoted himself to obtaining specimens. Diplomatic eff orts resulted in them being obtained (it has been said, illegally) for the zoos. Thankfully this occurred just in time, because a fl ood during 1895 ravaged the Imperial Hunting Grounds. One of the walls was destroyed. The remaining deer that did not escape, drown, or die from the cold, were killed and eaten when troops stormed the site during the Boxer Rebellion. There was a scarce few specimens living outside the Imperial Hunting Reserve however they were doomed to extinction in its native land. By 1939 the last of the wild species was shot and killed.

Due to there being Pere David’s Deer in several zoos the entire remaining herd was gathered and relocated to the 11th Duke of Bedford’s famous and expansive English Park of Woburn Abbey. This parks signifi cance is famous throughout our South Pacifi c region for supplying New Zealand some of its specifi c Red Deer herds and also it’s Himalayan Tahr. Once the remaining herd was at Woburn Abbey they bred and expanded numerically however they suff ered a decline during the period of World War I and II. During World War 11 the Duke being most mindful of the vulnerability of the sole herd and due to food shortages and bombing, separated part of the Woburn herd to various zoos. The current worlds herds have stemmed from Woburn Abbey. During more modern times Woburn has permitted some hunting of trophy Pere David’s under their game management and breeding program and I have studied some very large specimens that some of my U.S. clients have secured from there.

Today, the future of Pere David’s Deer is somewhat secure however the greatest percentage of the worlds remaining deer, are held in captivity. From Woburn’s herds they have been reintroduced into China that commenced in 1985 with 20 deer (5 males and 15 females). During 1987 a further 18 females were sent to China. The relic site of the Imperial Hunting Reserve (now called the Beijing Milu Park) was chosen for the re-introduction. A further introduction into China was completed during 1986 when 36 were selected from zoos throughout the UK and introduced into Dafeng Milu Nature Reserve near the Yellow Sea. By 2006 populations in this Reserve had increased to around 950. In 2005 the population had expanded to around 2,000. Deer from these regions have been released into further reserves and escapes have occurred. It is now believed (2015) there are over 700 individuals living in the wild with their numbers increasing. There are four fenced populations in China including Beijing, Dafeng, Shishou and Yuanyang with many very small fragmented herds where genetic bottlenecking is the greatest concern for the future.

Pere David’s Deer are a large deer standing approximately 1.2 meters tall (45 inches) at the shoulder. They weigh between 135 and 200 kilograms (298 and 440 lbs). Their Chinese name is sibuxiang which literally means “four not alike” and it is said that the four descriptions are cow, deer, donkey and horse and the expression could mean; “the tail of a donkey, the head of a horse, the hooves of a cow, the antlers of a deer”. It’s a strange and unique looking deer! 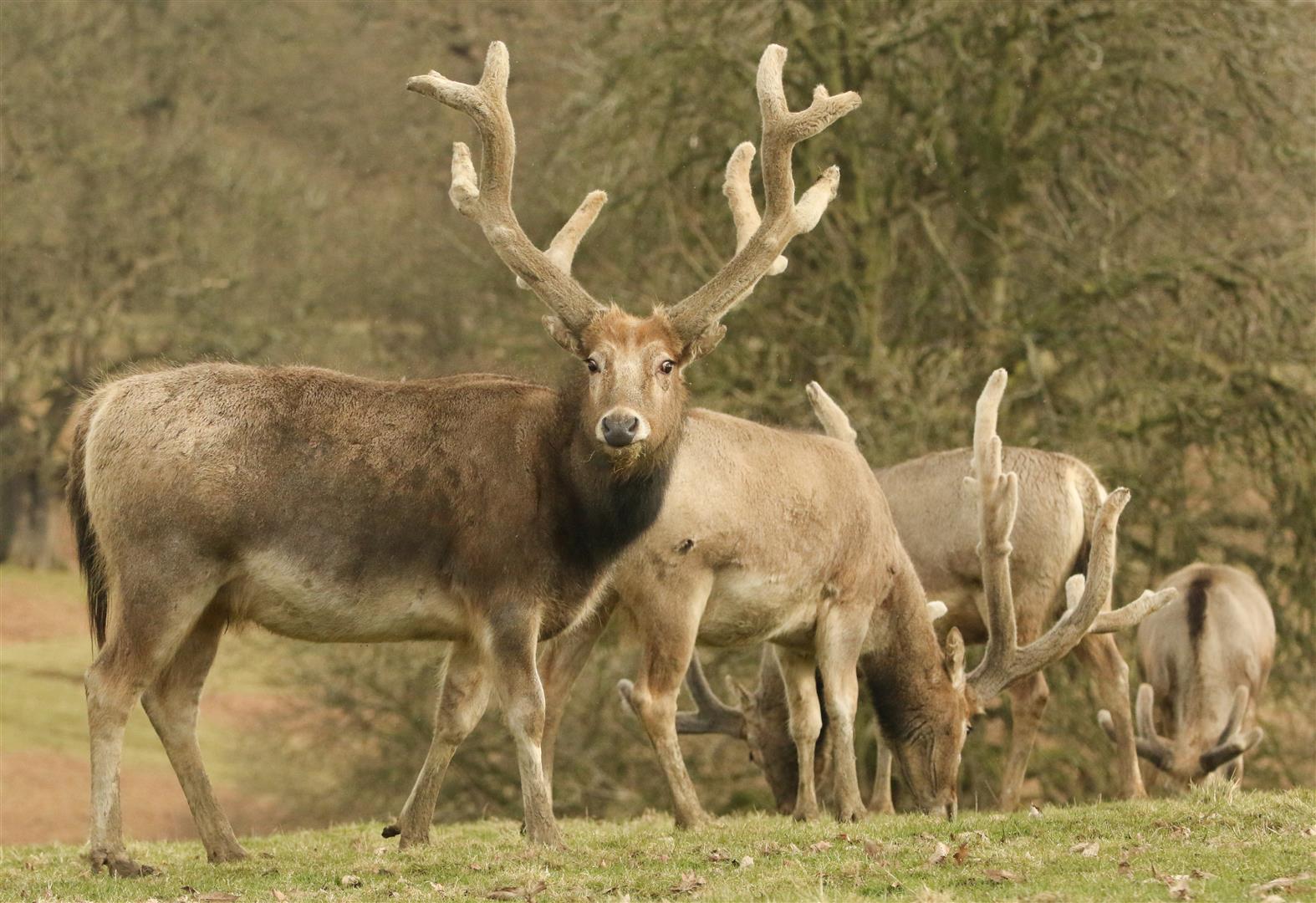 The tail is long. The head is long and slender with large eyes, large preorbital glands and small pointed ears.

The antlers are multi-tined with the main beam extending upwards and the major tines project towards the rear with lesser tines branching from these. There are reports that it’s possible for them to sometimes grow two sets of antlers in the one year. The summer pelage is red and not unlike a Red deer with a dark dorsal ridge which they are closely related too. The winter coat like most deer is darker and woolier.

Pere David Deer can be hunted at Woburn Abbey Deer Park of 3,000 acres for an A grade trophy fee of 6,965 British pounds. Several Texas game ranches also off er the hunting of them for around US$6,000 trophy fee.