Water deer (or Vampire deer) are endemic to China and Korea where as their name implies their preferred habitat is along the edges of rivers and swamp regions. The water deer is a small deer more similar to a musk deer than a true deer. There are two subspecies: the Chinese water deer (Hydropotes inermis inermis) and the Korean water deer (Hydropotes inermis argyropus). There is very little difference between the two with the Korean water deer being just slightly smaller and a little darker in colour. Despite its lack of antlers and certain other anatomical anomalies – including a pair of prominent, robust tusks (long canine teeth), it is classified as a cervid (deer family). The males have long tusks while the females are smaller. Its unique anatomical characteristics have caused it to be classified in its own genus (Hydropotes). Its tusks are similar to those of musk deer and it, like the Musk deer have a gallbladder and bladder instead of facial glands. Due to it having tusks and not evolving to have antlers (similar to Muntjac and Musk deer) it is considered one of the world’s most primitive deer species (some estimating as old as 35 million years). 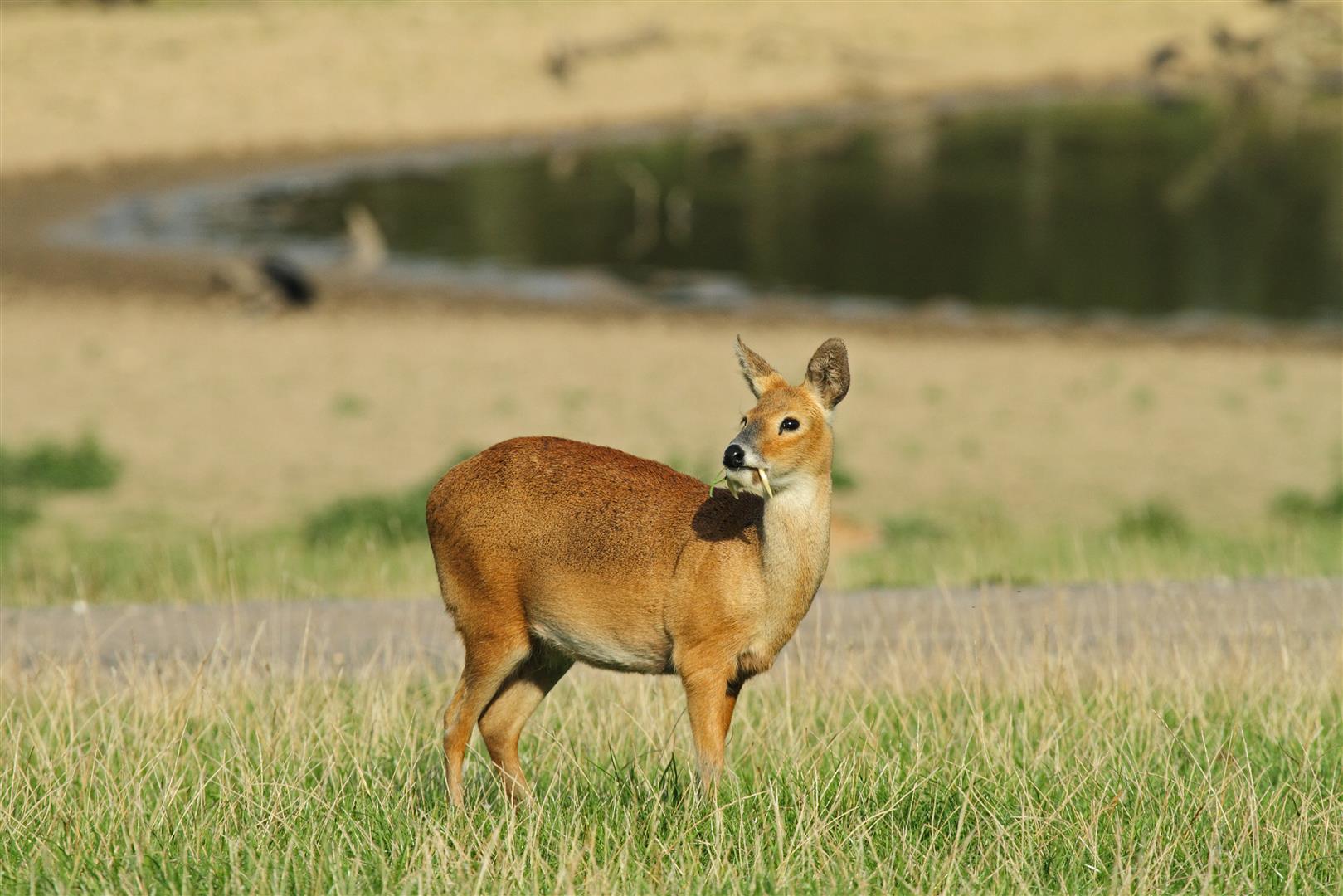 Water deer are indigenous to the lower reaches of the Yangtze River, coastal Jiangsu province (Yancheng Coastal Wetlands), and islands of Zhejiang of east-central China, and in Korea. In China, water deer are found in Zhejiang, Jiangsu, Hubei, Henan, Anhui, Guangdong, Fujian, Jiangxi, Shanghai, and Guangxi. They are now extinct in the southern and western China. In Korea, water deer are found nationwide. It thrives throughout the neutral demilitarized borderline between north and South Korea. Throughout their native range they are classed as “vulnerable.”

Water deer inhabit the land alongside rivers, where they are camouflaged from sight by tall reeds and rushes. They also inhabit mountains, swamps, grasslands, and even open cultivated fields. In the United Kingdom they show a preference for similar habitat and their spread has been somewhat restricted to river delta regions. Water deer are proficient swimmers, and can swim several miles to reach remote river islands. Chinese Water Deer are now located in United Kingdom, France (where they possibly no longer remain), Argentina, and a very limited number in the United States.

Chinese water deer stand at between 50 – 55cm tall at the shoulder and weigh between 11 – 18kgs. Both male (bucks) and female (does) are of similar size. Size wise they are approximately halfway between a Reeves Muntjac and a Roe deer. They are brown in summer/autumn (not unlike a hog deer in colour) turning to a dull speckled grey in winter and the fawns are spotted. Like Muntjac the tusks can cause serious injuries to other animals. During the rut the bucks habit is to walk stiff-legged, slowly to a possible rival then parallel in threatening behavior and this is generally enough to establish dominance however on occasions they will resort to battle for the right to mate. Serious injury can be inflicted with their tusks. They prefer to live separately and are not gregarious however can at times be observed in small groups where suitable feed bring them together. They selectively feed on herbs, swamp plants, browse, vegetables, and grains and appear to prefer weeds. Both bucks and does whistle and squeak loudly during the rut and scream loudly when being chased. Both bark when alarmed and bucks make a series of rapid chattering called whickering. They are very territorial and mark their boundaries with slightly scraped-out urine and faeces piles and by breaking twigs and reeds with their tusks and rubbing their heads along it to scent mark. They feed mostly around dawn and dusk however will feed throughout a 24-hour period while ruminating in between. While most deer cause damage to agriculture and trees the Water deer is not blamed for such things. It appears more fragile a species than most, and it is suspected that the rigorous and aggressive Reeves Muntjac displace them in some regions. 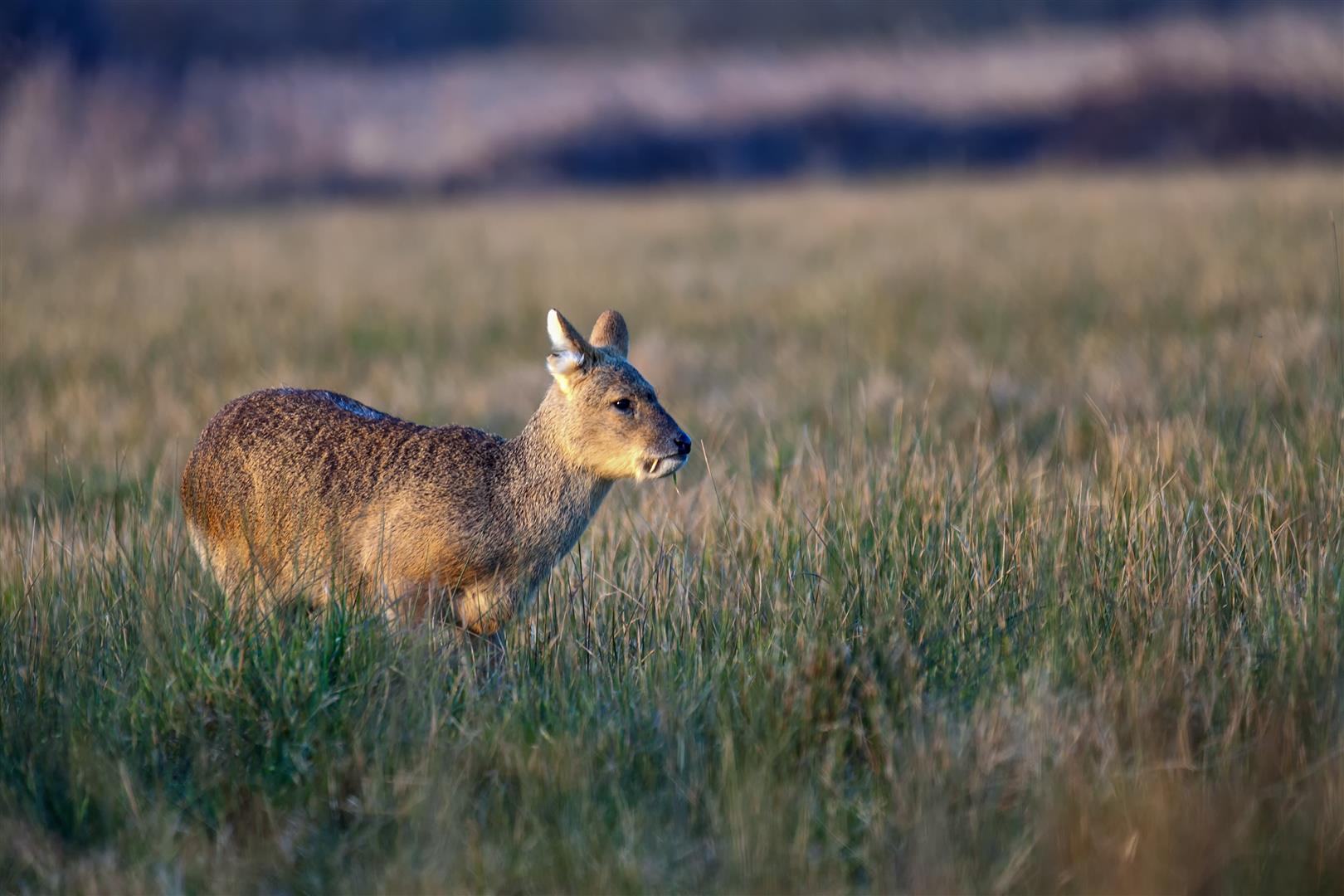 Chinese water deer were introduced to London Zoo in 1873 and from there they were introduced to Woburn Abbey in 1896 along with additional imports. Later they were provided to Whipsnade Zoo where some escaped during 1929 and still survive. Further releases were made into deer parks where additional escapes and intentional releases occurred since 1901. It is now believed that 10% of the world’s population of Water deer survives in the vicinity of Woburn throughout Bedfordshire, Cambridgeshire, Norfolk and north Suffolk with scattered observations reported outside of these regions. While a closed season and partial protection is in place for all deer species, that protects them from shooting – a hunting season exists for Chinese water deer in Britain. They are on the “invasive species” list that makes it an offence to release or spread them from their existing range. In contrast there is the Chinese Water Deer Foundation set up to protect them. It appears the U.K. cannot decide whether they want them or not. The British Deer Society coordinated a survey of wild deer in the United Kingdom between 2005 and 2007 and noted the Chinese water deer as notably increasing its range since the last census in 2000. 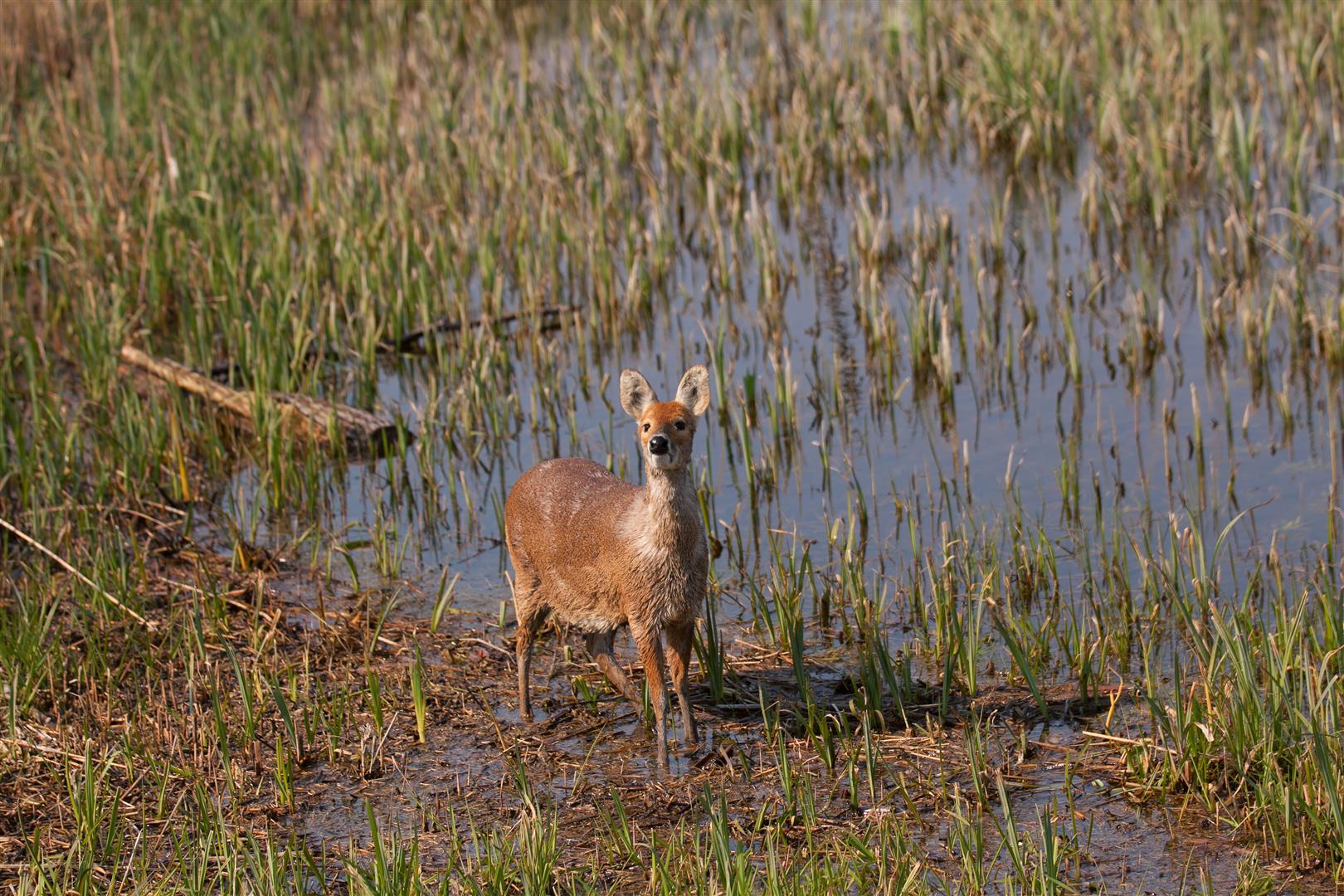 Chinese Water deer may be hunted in Britain at very reasonable rates with multiple guiding companies from which to choose. All inclusive 3 – 4 day hunts may be purchased for approximately 550 Euro base hunt + 350 Euro for medal buck (AUD$1,500-). The hunting of them is often combined with Muntjac. The season in Britain is from 1st November to 31st March.
They may also be hunted in Texas, USA where their availability is very limited.