When watching a sports game on television you often hear the commentators talk about ‘playing the percentages.’ In short this means the team they are describing is employing a safe game plan which if carried out correctly will win them the game, it may not be flashy, but it will achieve the desired result.

In New Zealand we are a rugby mad and sports mad nation. We often hear the term ‘percentage rugby’ and ‘playing the percentages,’ well I like to talk about ‘percentage hunting’ and hunting the percentages. Hunting is a sport and like a lot of sports on your hunt you have an objective you want to achieve and a limited time in which to do so. Like other sports the tactics you employ may change as the game or hunt progresses. When talking about high percentage options or low percentage options we have generally located our ‘target animal’ and we know our target area, we now want to use the best option available to us, our highest percentage option, to give ourselves the best chance of success.

As a guide you must evaluate every situation and formulate a plan for your client which will work for them, remembering that all hunters are different in experience, dedication, fitness and shooting ability. You are always best to employ high percentage options. Let’s describe a scenario here before I confuse anyone too much.

‘Percentage hunting’ depends on a raft of variables, in my specialty of free range trophy hunting the main variable is the abundance of trophy animals. Let’s say we are on a tahr and chamois combo hunt, the particular valley we are in holds good numbers of trophy bull tahr, you know this from previous experience or you have established this from glassing your ‘target areas’. Day one of your hunt and you have seen six trophy bulls in different ‘target areas’, one of the ‘target areas’ being a scrub filled side creek right behind your camp, that morning you have watched a good mature bull bed down in this area. The hunter you are guiding is fit and can shoot competently out to 350m. You have a dream situation. A high percentage option is to climb the next side creek up valley from the tahr where you have established there is a grassy knoll offering a shooting platform to shoot down on the bull. But with the time left in the day you may or may not get a shot before dark, you could leave this option for day two and leave the bull undisturbed or try a low percentage option and walk up the creek and hope that you can get a shot from the creek bed?

Your hunter says ‘hey why not,’ he can see as you can that there are plenty of trophy bulls around. You wait for the evening to cool and the daytime thermal to abate. Another cup of coffee in camp and you can finally feel the wind blowing in your face down the side creek, on go your day packs and you push off up the creek. Half an hour later the bull stands up and an expert shot is made from 330m. You are back to camp first evening of the hunt before the first stars have even appeared in a brilliant clear sky which is still emitting enough daylight to get dinner cooking; at your feet sits a 13 inch bull tahr. Hey it doesn’t happen often but it does happen. You are off to a great start and you now have a full week to locate and secure a trophy chamois. This is an example of how employing a low percentage option in a certain situation can be the right thing to do.

Let’s look at the other end of the scale where a high percentage option is the best option to employ. You are on an eight day hunt for a whitetail buck, one of the hardest species to secure in the South Pacific due to a number of factors the main one being extremely low numbers of mature trophies. Your client is good company, an average shot and of average fitness, just to add a little spice to the situation the hunter has taken every trophy animal in Australia and New Zealand, he is a free range enthusiast and the last animal on his list is a trophy whitetail buck. He has come to you on his quest to fulfil his South Pacific slam.

After five days of glassing many of your better producing ‘target areas’ you have not seen a single trophy animal. The morning of day five dawns, clear and sunny, an hour after daylight you are glassing a ‘target area’ right on the limit of the effective range of your binoculars. You pick out an irregular colour and shape, it moves and instantly you know it’s an animal. You reach for your spotting scope and sure enough you make out an animal, what you see excites you as you can see a substantial amount of main beam in the antler’s, but it’s so far away its very difficult to judge the antler’s points. You adjust you position behind the scope to remain as still as possible for the best possible view, as you do this the cloud rolls in reducing the quality of light, you can still make out the animal but you now have no chance of judging the trophy. The cloud stays for the duration of the morning, although the weather outlook for the next few days is mainly fine. Your initial reaction to the trophy was that it had plenty of main beam, how many points you could not tell, you have three days left on the hunt.

You decide to employ one of your favourite sayings, ‘go with what you know.’ You know there is a buck in this target area which has good length in the main beam. On go your packs with three days worth of food and gear and the hunt begins. Eight hours later after a taxing hike you have covered a lot of dead ground up a large side valley and gained 500m in altitude. A basic fly camp (spike camp) is erected in the beech forest on the edge of your target area about 1km around the alpine face from where you believe the buck to be. Next morning you are both up and ‘walking in the dark’ to be in position to search for the buck as soon as glassing light arrives, half an hour later you spot the buck feeding on the upper edge of the beech forest, 1.5 km away on the far side of an alpine basin.

The basin itself is 1km wide and consists of open tussock and rock, beech forest defines its bottom edge, the forest licks up both sides, steepening in gradient until it meets a massive rock wall at the back with the white-water of various waterfalls cascading down from high above. A permanent mist of water swirls freely on the gentle breeze at the back of the basin as a result of the water falls thundering mercilessly into the bedrock of the basin floor. Four streams from the different falls meander their way to the verge of the basin before converging into one and dropping down another huge fall deep into the beech forest. You position the spotting scope on the buck’s head and it’s one of those rare moments when your heart skips a beat, he carries a large trophy you confirm this by counting 10 well defined points, or maybe it’s eleven, yes it’s eleven he carries a small extra point near the end of the main beam on his right antler. The trophy is the best you have seen in eight years, the buck itself is in pristine condition with a beautiful winter cape carrying an unusually large white throat patch under his chin. The two of you are in awe of this creature but can close the distance to no further than 750m before the beech forest on your side of the basin gives way to alpine tussock, shrubs, grasses and rock offering little cover. The buck beds down and you are left with a tantalising view of only his antlers, slowly over the next hour his head turns from left to right, right to left and then in an up and down motion as he itches his flank before finally stretching out his neck and lowering his great trophy down beneath the shrubbery.

There are low percentage options available in the form of a belly crawl out through the basin to a large rock offering cover and a shooting platform. But you feel you would end up too close with a poor sight picture, it may be possible to sneak in now and wait for him to stand in the evening, but you would be waiting within 200m, a gentle change of the breeze and it’s all over, it’s a 50/50 option, the odds are nowhere near good enough for this calibre of an animal. You back out and that evening after studying the ground you find a grass terrace half way up the back wall of the basin which offers passage to the far side where the buck will feed. An hour before dark up he stands and you are watching him from 650m, there is a low percentage option to stalk closer down a shrub filled chute, but you decide against it, what you really need is for the buck to feed over into the next gut out of view, you can then approach out of sight and close the distance to a comfortable shooting range. The buck does not intend doing that this evening, he’s feeding happily and you watch those huge antlers wave around until the sky starts to darken and it’s time to head for camp.

Very little sleep is had, it’s a basic fly camp on air mats you spend most of the night checking your watch, not wanting to over sleep, knowing that the morning will be your best opportunity.

You head off in the dark and just as its light enough to glass you reach the position of the previous evening, above where you last saw the buck, looking down on the bush edge. Twenty minutes later and ‘there he is,’ already bedded at 220m looking downhill. The sun has struck the peaks above; in a calm manner you ask the hunter to slide up over the protruding rock, rest the stock of the rifle on top and make the shot.

No more than twenty seconds later the rifle cracks and from a kneeling position you see the buck slump downhill, roll over a couple of times and come to rest on his side, his legs thrash for only a few seconds before they are stretched out straight and become still, his right antler of six points stands out tall above the alpine grass.

The morning sun is now not far away, you make your way down to the trophy of all trophies and sit contently beside the buck sucking in the moment and absorbing the sounds, smells an sense of achievement mingled with sense of sorrow, for you are the reason this great animal has breathed his last.

You have succeeded in taking a once in a lifetime trophy due to your patience and your ability to ‘hunt the percentages.’ 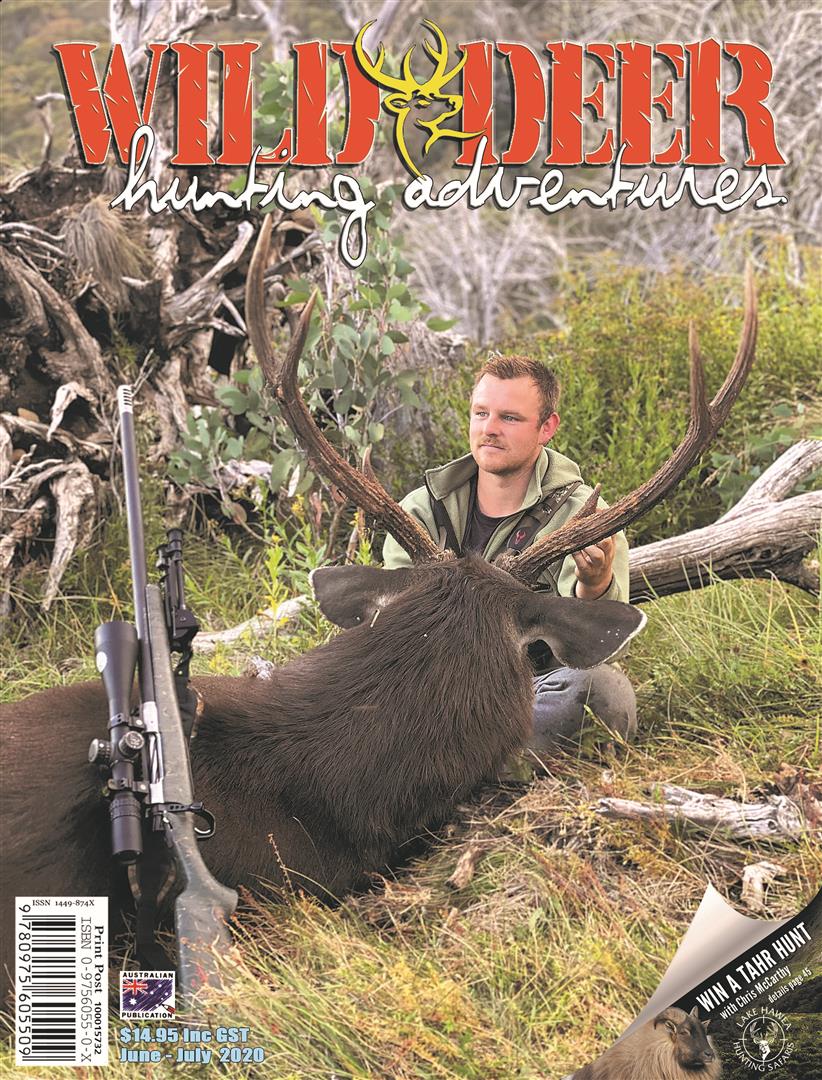 Safety in the bush when hunting sambar

April 15, 2020
Massive reward for effort in taking this ripper of

Check out these great snaps of Fallow Deer in the

Check out this cool sequence of a nice Sambar Stag

@flynns_creek_pointers headed away last weekend an

How’s this for an absolute beauty of a Sambar St