Marsh deer are the largest deer species indigenous to South America. There is no subspecies. They reach a length of 2 m (6.6 ft) and a shoulder height of 1.2 m (3.9 ft) which makes them similar in body size to Red deer. They range through parts of Argentina, Bolivia, Peru, Brazil, Uruguay and Paraguay where they are restricted by the very specific habitat (as their name implies) they require in which to survive. These regions lie in central/eastern South America eastward from the Andes. Formerly they were located in much of tropical and subtropical South America and ranged east of the Andes, south from the Amazon rainforest, west of the Brazilian Atlantic rainforest and north of the Argentinian Pampa. Today it is largely reduced to isolated populations in marsh and lagoon zones in the Paraná, Paraguay, Araguaia and Guapore river basins. Small populations also occur in the southern Amazon, including Peru where they are protected in Bahuaja-Sonene National Park that is rich with wildlife. The park shares borders with Madidi National Park in Bolivia to the east and Tambopata National Reserve to the north. Marsh deer are listed as a vulnerable species. 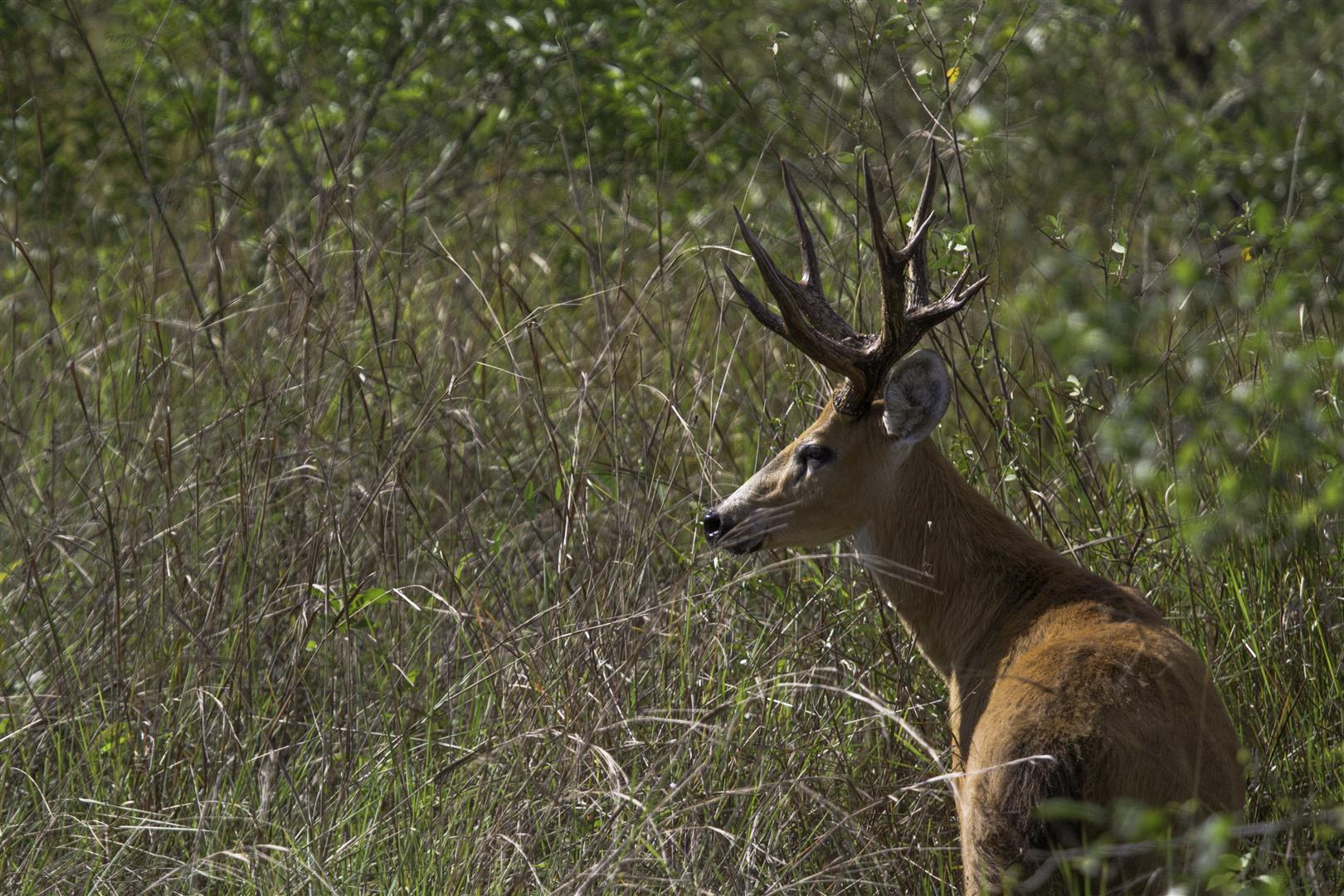 The Marsh deer is a long legged handsome deer with striking colours. Its antlers somewhat resemble the North American mule deer or blacktail deer but the body structure and colour is totally different. The antlers generally have four or five tines per side but it’s not uncommon for them to have additional points. They possess very large ears lined with white hairs, red-gold to tawny brown fur, blackish eyes and long dark legs. Like most deer their hair turns darker during winter. There are white marks on the hips and around the eyes. The legs are black below the tarsal and they have a dark muzzle. The total body length is 153 to 200 cm (5.02 to 6.56 ft), while the tail adds a further 12–16 cm (4.7–6.3 in). The height at the shoulder can range from 100 to 127 cm (3.28 to 4.17 ft).
Only males possess antlers, which can reach a length of 60 cm (24 inches). An adult typically grows to a weight of 80 to 125 kg (176 to 276 lb), although an exceptional one can weigh up to 150 kg (330 lb). Marsh deer are gregarious in nature and an average size herd will number from five to seven animals. 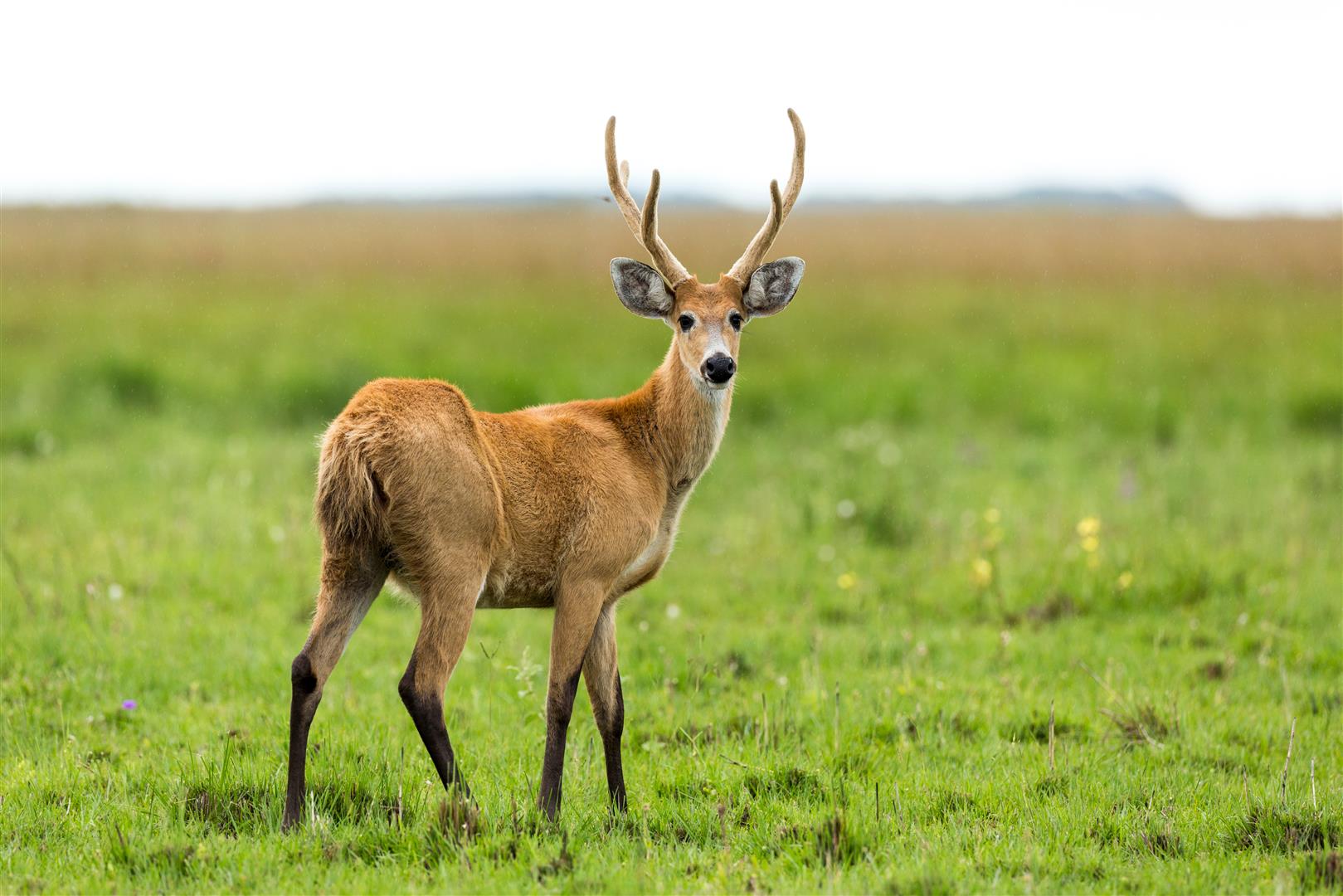 The marsh deer lives only in marsh areas mostly throughout the Pantanal and Chaco regions, in which the level of water is less than 70 cm (28 in) deep. They are very proficient swimmers with webbed hooves. The hoof, which is large in relation to the body, has adapted and has the ability to spread which makes it ideal for swimming and walking on marshy surfaces. The tall vegetation and density of marsh flora protect Marsh deer from predators and provide them with food. They have a habit of following water levels between the dry season and flooding season. With fluctuation in water levels, they are able to find new food sources that the water uncovers during the dry. Marsh deer are herbivorous with diets comparable to other species of deer, although marsh deer consume mainly aquatic and riparian vegetation. Stomach analyses found that water lily and other leaves, grass, and browse was consumed. 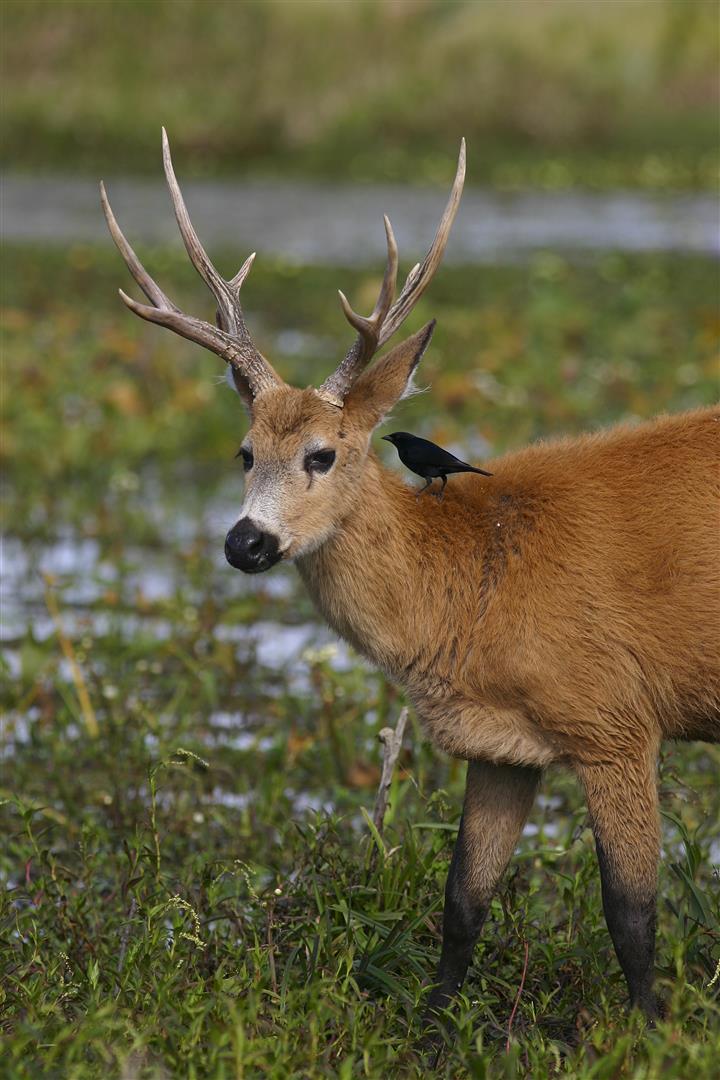 Some limited freshwater regions on the Pantanal Wetland, Brazil which is part of a natural region encompassing the world’s largest tropical wetland area totaling an estimated 140,000 to 195,000 square kilometers reported low densities of individuals dictating that those ponds are not able to support large populations of marsh deer.

The cause of declining populations of marsh deer are blamed on habitat destruction and disease introduced to them wherever they co-exist with cattle even though the same disease does not affect cattle. Diseases introduced by livestock (e.g., FMD, brucellosis, babesiosis and several ecto- and endoparasitoses) are considered threats to the conservation of all deer species currently found in South America (and it is not restricted to this continent). However, the susceptibility of such species to the majority of livestock pathogens (agent of disease) is poorly understood. Foresters persecute Marsh deer where they are perceived to cause economic loss due to the buck’s habit of antler rubbing and resultant destruction of trees. Loss of habitat due to forestry plantations, draining of wetlands for agriculture, and the construction of dams primarily for hydroelectric power has all had major impacts upon Marsh deer specific habitat requirement. An additional reason the Marsh deer is such a vulnerable species is also due to its size since adult Marsh deer can reach weights of 330 pounds (150 kilograms); it’s a tempting amount of meat on the hoof for a South American family. This has resulted in humans being its current main predator. These threats combined have resulted in fragmentation of the population that in its self is another major threat to its wellbeing. 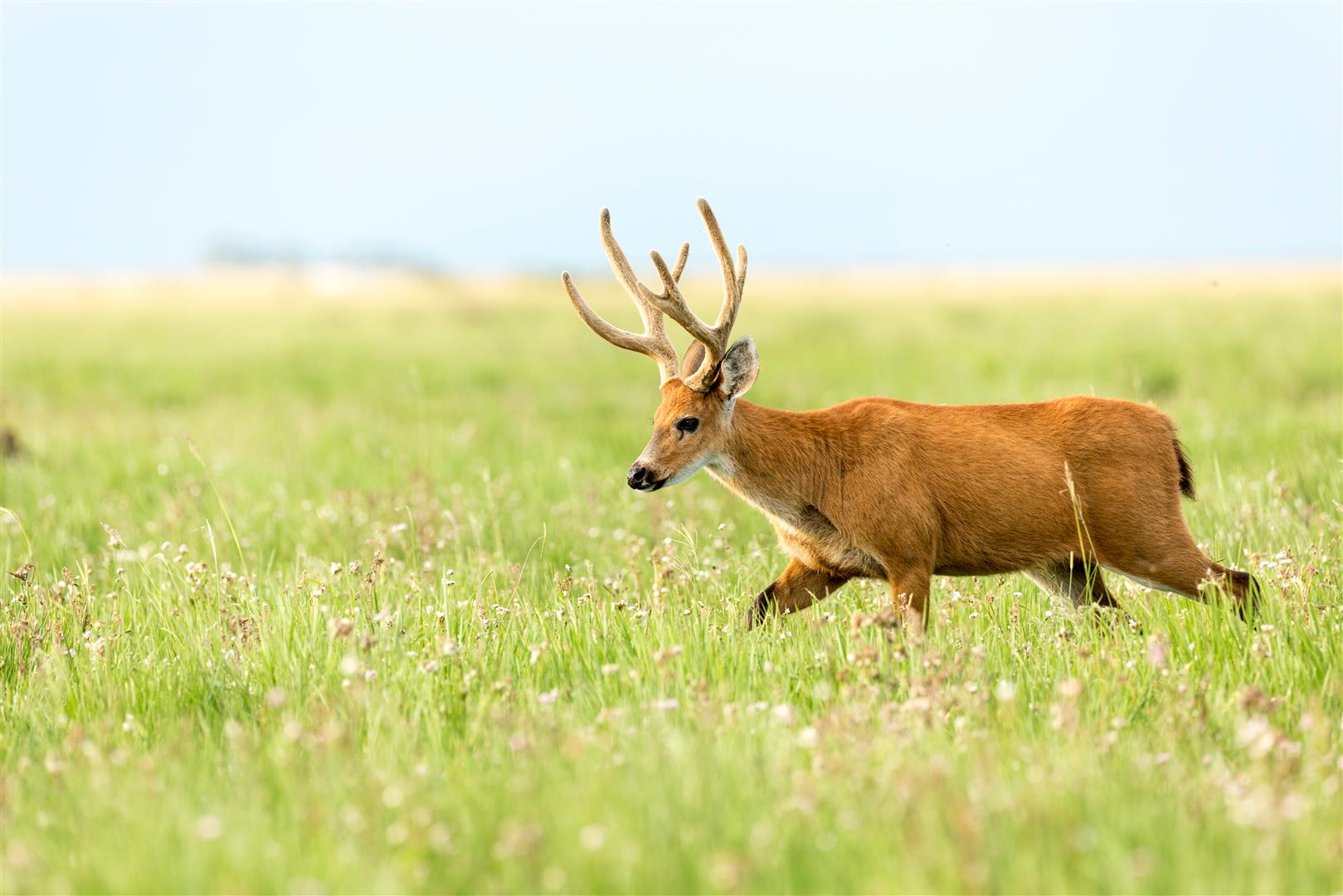 Before the rise of human hunters the only predators big enough to bring down a marsh deer were jaguars and pumas. Their light tan hides and black legs blend in with the reeds and long grasses of a swamp, but are no camouflage in other areas.

Marsh deer are attempting to adapt to the sweeping changes encroaching on their environment. Although they are naturally crepuscular in behavior (preferring to feed at dawn and dusk), the University of Michigan Museum of Zoology reports that some herds of Marsh deer are now totally nocturnal. Some herds are also moving to more mountainous ranges where people are less likely to visit. Deer the world over are survivors and it appears this species is adapting and pushing its self to the extreme just so it can continue living. 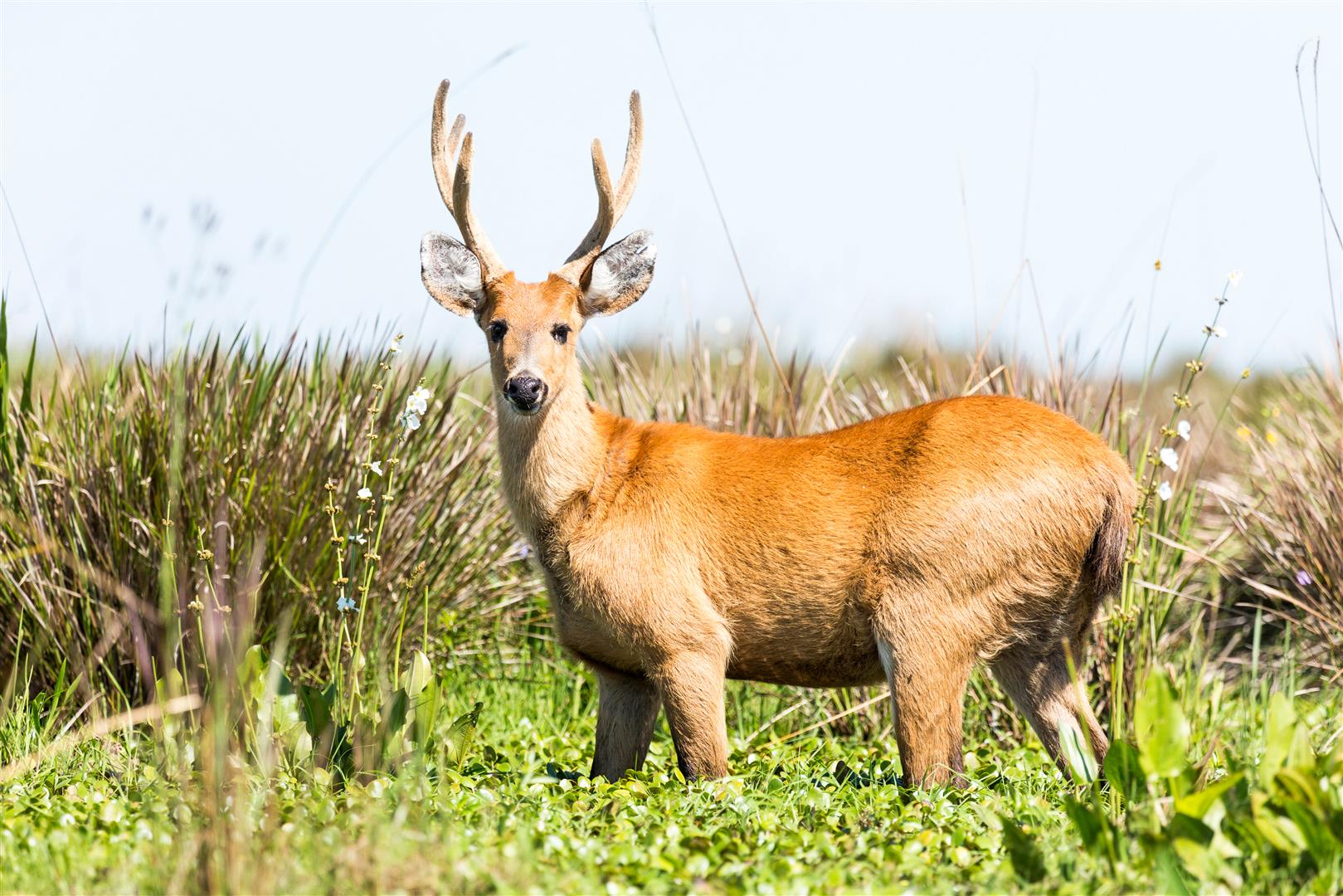 The species is declining throughout much of its range although recent surveys in Brazil have revealed higher populations than had been previously recorded (Mauro 1995). Combined experts indicate that approximately 41,000 Marsh Deer still survive in Brazil. In Argentina, population estimates are around 2,000 individuals; other important populations are known from Formosa and the Paraná River Delta. In Bolivia, several populations are known from the Beni savannahs and Noel Kempff National Park, and a recent population survey in Pampas Heath estimates 700 deer in the north of Madidi National Park. The principal population in Paraguay is in the Yacyretá region where density is low. Most populations in Paraguay were reported to be declining in the 1970s. In Peru the species occurred in small numbers and the last record of the species in Uruguay dates back to 1958.

The Marsh deer is totally protected from hunting in all distribution areas. I could not discover any known location where it is available in Game ranches.