The pudus, in Spanish pudú, are two species of South American deer and are the world’s smallest deer. The name originates from Mapudungun, the language of the indigenous Mapuche people of central Chile and southwestern Argentina. The two species of pudus are the northern pudu (Pudu mephistophiles) from Venezuela, Colombia, Ecuador, and Peru, and the southern pudu (Pudu puda) from southern Chile and south-western Argentina. Because they live on the slopes of the Andes Mountain Range, they are also known as the “Chilean mountain goat”. The southern pudu is currently classified as near threatened, while the northern pudu is classified as Data Deficient in the IUCN Red List.

The Chevrotain or Mouse deer of Indonesia of which there are two subspecies (the greater and lesser) were previously recognised, as the smallest deer in the world however they have been reclassified and are now accepted as not being a true deer. The Chevrotain can be observed in the Singapore Zoo where I have photographed them over several decades. The pudus are the world’s smallest deer, with the southern pudu being slightly larger than the northern pudu. It has a stocky frame supported by four short and slender legs. It is 32 to 44 cm (13 to 17 in) high at the shoulder and up to 85 cm (33 in) in length. Pudus normally weigh up to 12 kg (26 lb) but the highest recorded weight of a pudu is 13.4 kg (30 lb). Pudus have small, black eyes, black button-noses, and rounded ears with lengths of 7.5 to 8 cm. Males have short, spiked antlers that are not forked, as seen in most species of deer. The antlers, which are shed annually can extend from 6.5 to 7.5 cm in length and protrude from between the ears. There are large preorbital glands also. Pudus have small hooves, dewclaws, and short tails about 4.0 to 4.5 cm in length when measured without hair. Coat coloration varies with season, sex, and individuals. The fur is long and stiff, typically sleek, with a reddish-brown to dark-brown hue. The neck and shoulders of an aged pudu turn a dark grey-brown in the winter. 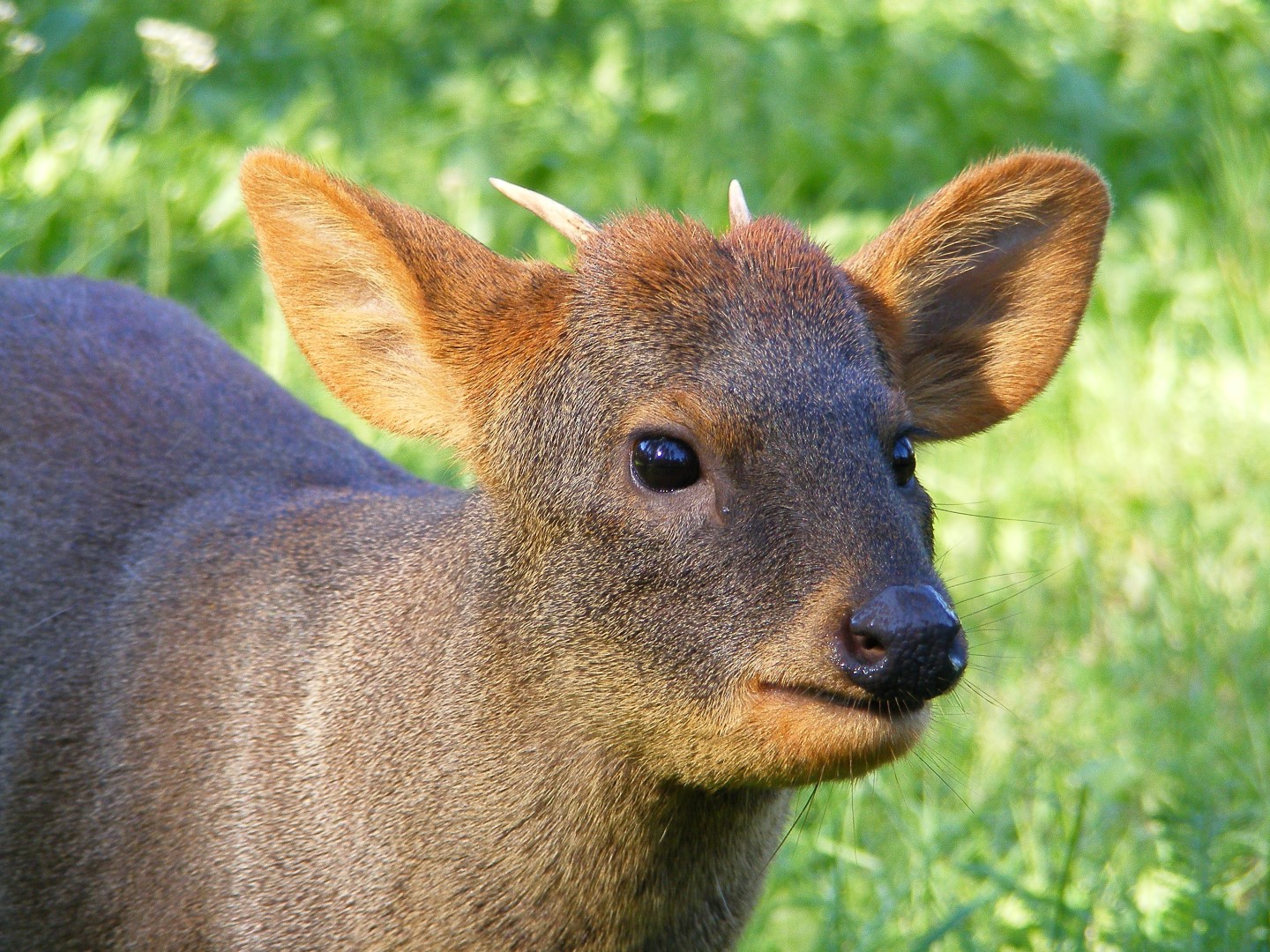 The pudu inhabits temperate rainforests in South America, where the dense underbrush and bamboo thickets offer protection from predators. Southern Chile, southwest Argentina, Chiloé Island, and northwest South America are home to the deer. The northern pudu is found in the northern Andes of Colombia, Venezuela, Ecuador, and Peru, from 2,000 to 4,000 m (6,600 to 13,100 ft) above sea level. The southern species is found in the slopes of the southern Andes from sea level to 2,000 m (6,600 ft).

The climate in which the pudus inhabit is composed of two main seasons, damp, moderate winter and an arid summer. Annual precipitation in these areas of Argentina and Chile ranges from 2 to 4 m (6.6 to 13.1 ft).
The pudu is a solitary animal whose behaviour in the wild is largely unknown because of its secretive nature. Pudus are crepuscular in behaviour, most active in the morning, late afternoon, and evening. Their home range generally extends about 16 to 25 ha (40 to 62 acres), much of which consists of crisscrossing pudu-game trails. Like many deer species each pudu has its own home range, or territory. A single animal’s territory is marked with sizable dung piles found on trails and near feed and resting areas. Large facial glands for scent communication allow correspondence with other pudu deer. Pudus do not interact socially, other than to mate. It’s a very timid deer, like many, and emits a warning bark when alarmed. Its fur bristles and the pudu trembles when angered. 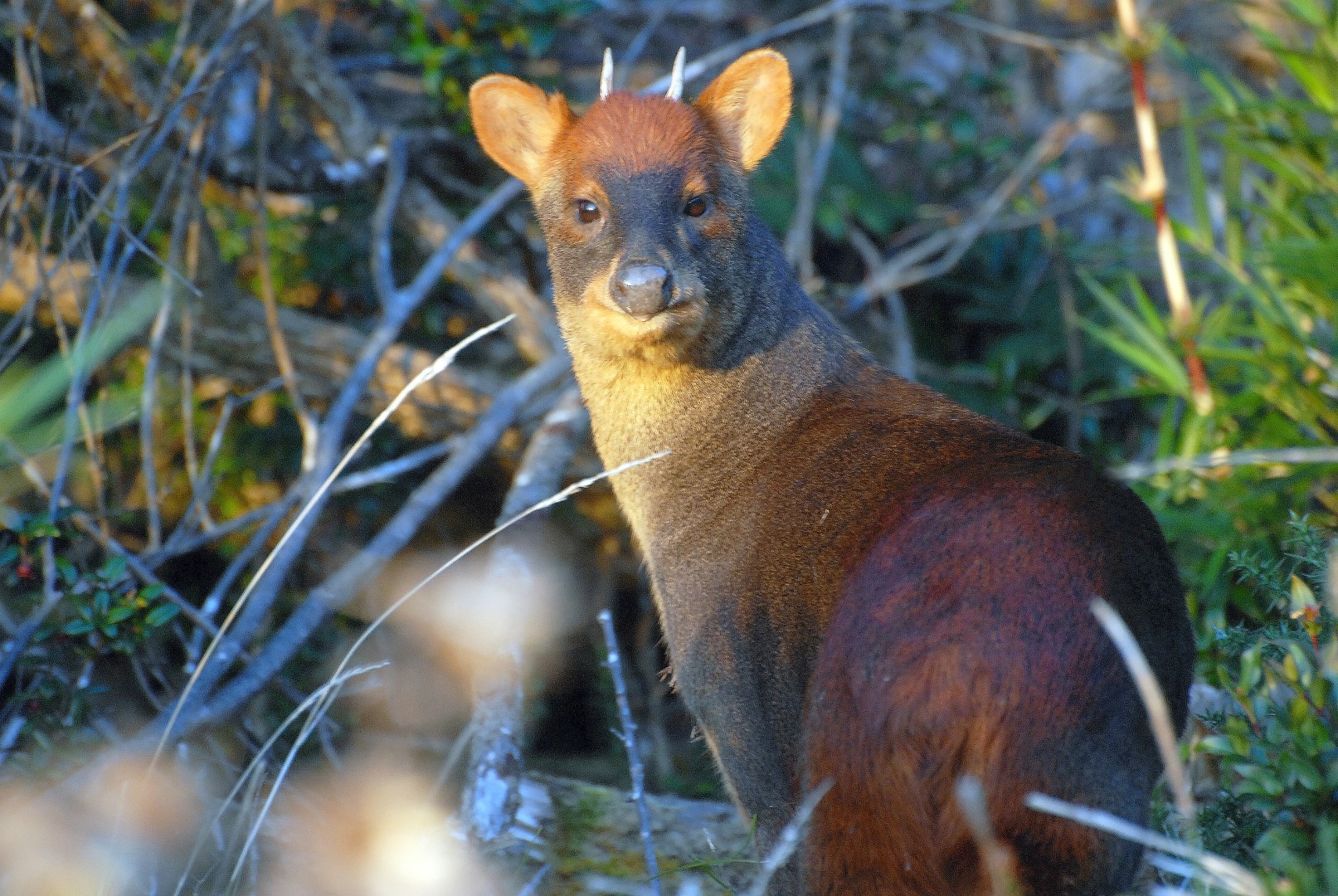 Predators of the pudus include the horned owl, Andean fox, Magellan fox, cougar, and other small cats. The pudu is a wary animal that moves slowly and stops often, smelling the air for scents of predators. Being a proficient climber, jumper, and sprinter, the deer flees in a zigzag path when being pursued. The lifespan of the pudus ranges from 8 to 10 years in the wild. The longest recorded lifespan is 15 years and 9 months. However, such longevity is rare and most pudus die at a much younger age, from a wide range of causes. Maternal neglect of newborns, as well as a wide range of diseases, can decrease the population. A popular rumour is that if alarmed to a high degree, pudus die from fear-induced cardiac complications.

The pudus are herbivorous, consuming vines, leaves from low trees, shrubs, succulent sprouts, herbs, ferns, blossoms, buds, tree bark, and fallen fruit. They can survive without drinking water for long periods due to the high water content of the succulent foliage in their diets.

Pudus have various methods of obtaining the foliage they need. Their small stature and cautious nature create obstacles in attaining food. They stop often while searching for food to stand on their hind legs and smell the wind, detecting food scents. Females and fawns peel bark from saplings using their teeth, but mature males may use their spikelike antlers. The deer may use their front legs to press down on saplings until they snap or become low enough to the ground so they can reach the leaves. Forced to stand on their hind legs due to their small size, the deer climb branches and tree stumps to reach higher foliage. They bend bamboo shoots horizontally in order to walk on them and browse on higher branches. 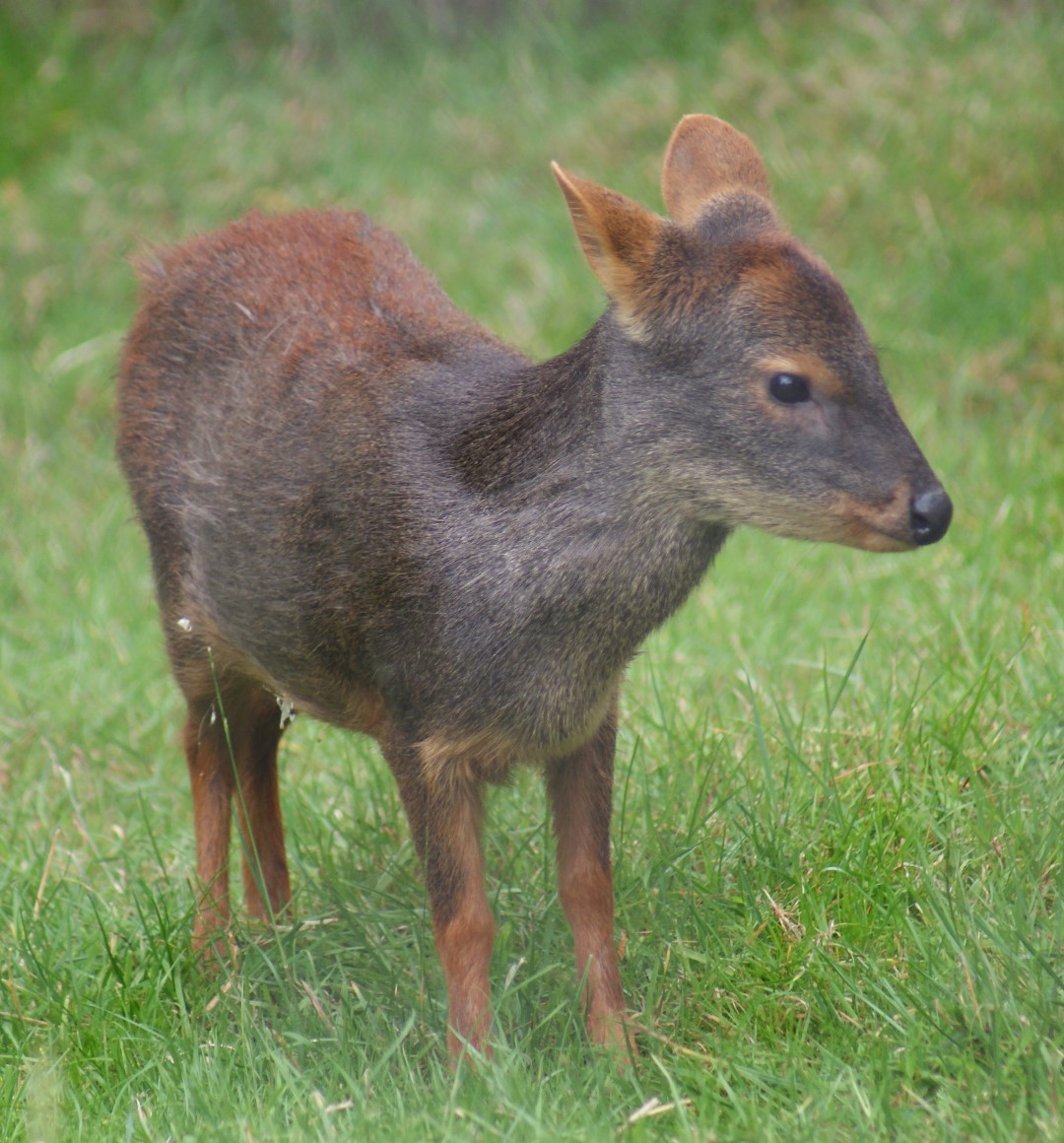 Pudus are solitary and only come together for rut. Mating season is in the Southern Hemisphere autumn, from April to May. To mate, the pudu male rests his chin on the female’s back, and then sniffs her rear before mounting her from behind, holding her with his fore legs. The gestation period ranges from 202 to 223 days (around 7 months) with the average being 210 days. Females and males weigh the same at birth. Fawns have reddish-brown fur and southern pudu fawns have white spots running the length of their backs. Young are weaned after 2 months. Females mature sexually in 6 months, while males mature in 8–12 months. Fawns are fully grown in 3 months, but may stay with their mothers for 8 to 12 months.

Pudus are susceptible to disease and are another of the South American deer that suffer greatly from loss of habitat. The introduced European red deer compete with them for feed and their numbers suffer from subsistence hunting. Dogs also prey upon them and many die from motor vehicle road-kill.

Currently many are held in captivity and breeding programs provide numbers for re-introduction to national parks within their endemic range.

There is no hunting available for this species.

Article 3: How to glass for animals