Pampas deer are known as venado orgama in Spanish and as veado-campeiro in Portuguese. It is a small species of Deer that live in the grasslands of South America at low elevations. Their habitat includes water and hills (that is susceptible to winter drought), and rolling grassland. There are 3 subspecies: O. b. bezoarticus that live in eastern and central Brazil, south of the Amazon river into Uruguay. O. b. leucogaster that live in southwestern Brazil, to southeastern Bolivia, to Paraguay and into northern Argentina. O. b. celer from the southern part of Argentina; they are the rarest and most threatened of the species.

Many Pampas deer live on the Pantanal wetlands and other areas of annual flooding cycles. Human activity has changed much of the original habitat. Plantations of pine forest being one major rapid modification to habitat. They are known to live up to 12 years in the wild, longer in captivity, but are threatened due to over-hunting and habitat loss. Many people are concerned over this loss, because a healthy deer population means a healthy grassland, and the healthy grassland is home to many species, some also threatened. The total population of Pampas deer is approximately 80,000 in total, with the majority of them living in Brazil. 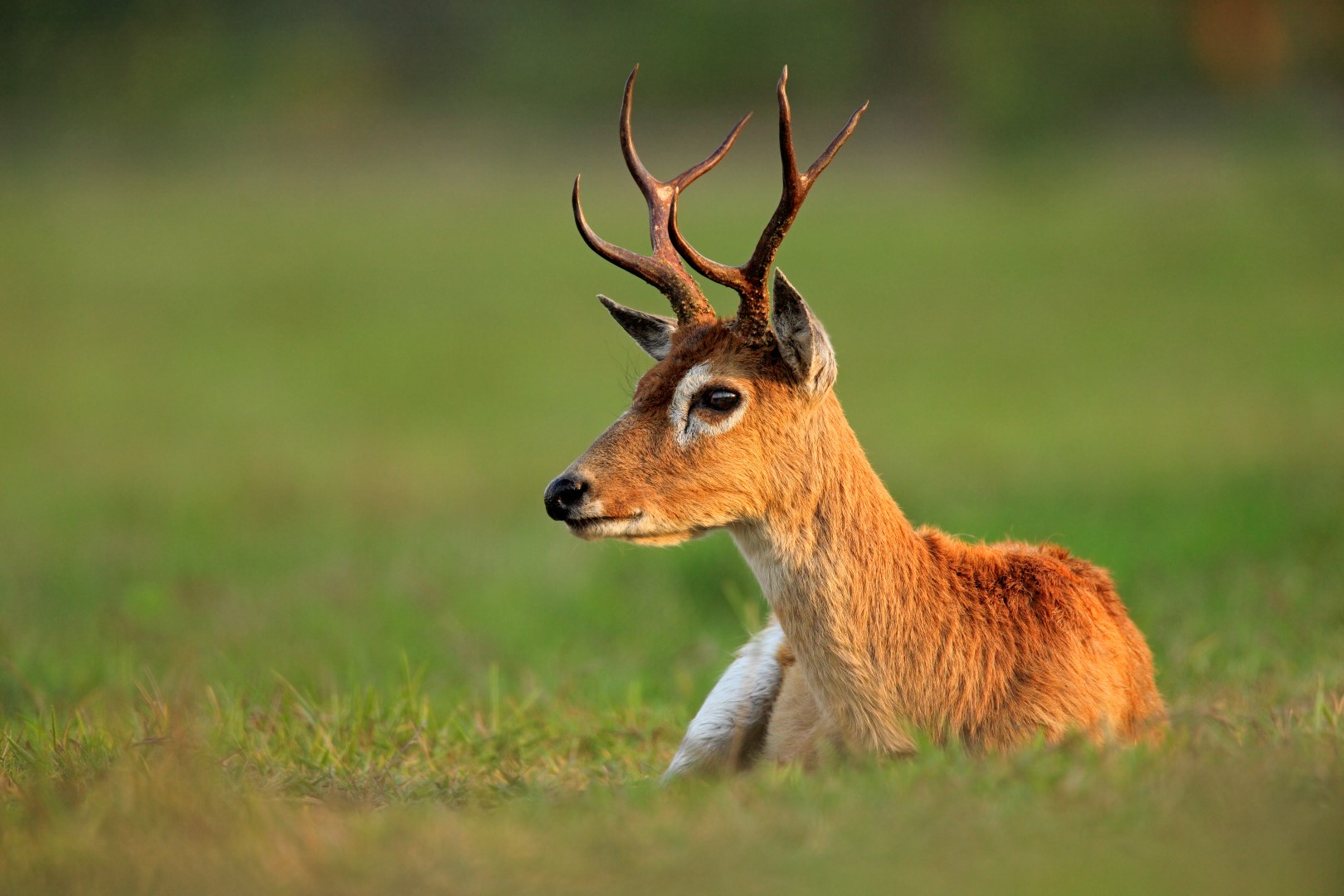 Pampas deer are a slender, slightly built deer, tan in colour. They are lighter in colour on their undersides and insides of legs. Their coat colour does not change with the seasons. They have white spots above their lips, a dark muzzle band, white rings encircling their eyes and a white throat patch (similar to many deer species). They are very similar to the south American Marsh deer in appearance but much smaller. At first glance the Pampas deer does not have the dark lower legs of a Marsh deer and noticeably the ears of the Pampas deer are not as wide and considerably pointed. Their antlers have fewer points and are slender (typically 3 tines per side). They have long brow tines like that of a Sambar but they protrude from the main beam slightly up the beam above the coronet (similar to many Sika). They also have shanghai-tops similar in style to a Sambar (but very lightweight). Their shoulder height is 60–65 cm (24–26 in) in females and 65–70 cm (26–28 in) in males. Their tails are short and bushy, 10 cm to 15 cm long, and when they run, they lift their tail that is surrounded by a white caudal patch.

Adult males typically weigh 24–34 kg (53–75 lb), but have been documented up to 40 kg (88 lb), and females typically weigh 22–29 kg (49–64 lb). Males shed antlers annually in August or September, with a new set grown by December. Females have hair-whorls that look like tiny antlers stubs. Females and males have different stances during urination. Males have a strong smell secreted from glands in their back hooves that can be detected up to 1.5 km away.

Courtship is starkly different to most other deer species where Pampas deer behaviour is submissive, displayed by low stretching, crouching, and turning away. The male initiates courtship with a low stretch. He makes a soft buzzing sound. He nuzzles the female and may flick his tongue at her, and averts his eyes. He stays near her, and may follow her for a long time, smelling her urine. Sometimes the female responds to courtship by lying on the ground.

Pampas deer do not defend territory or mates, but do have displays of dominance. They show dominance by keeping their heads high and trying to keep their side forward, and use slow, deliberate movements. Similar to most deer species, when bucks are challenging each other, they rub their antlers into vegetation and scrape them on the ground. They may urinate into the scrape they’ve made, and sometimes defecate. They rub the scent glands on their heads and faces into plants and objects. They usually do not fight, but just spar with each other, and they do commonly bite. Sparring is initiated by smaller bucks touching noses with the larger bucks. Groups are not separated by gender, and bucks will drift between groups. There are normally only 2-6 deer in a group, but there can be many more when they congregate in good feeding areas. They do not have monogamous pairs, nor are there harems. 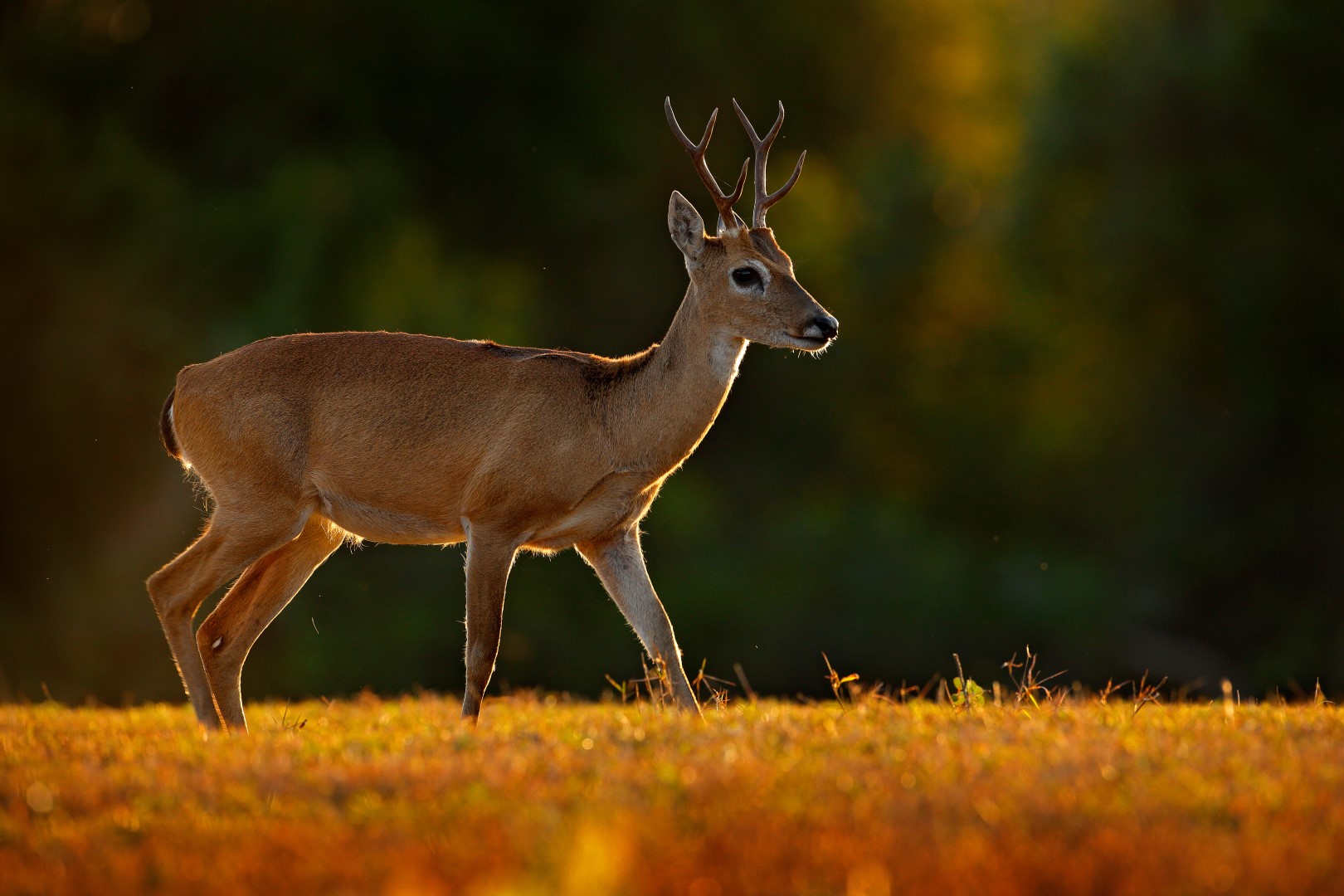 When threatened by danger, their habit is to hide low in available foliage and hold, and then bound off about 100–200 meters, often looking back at the disturbance. They can bound in long flat jumps and run. If they are alone, they may just quietly slip away. Females with a fawn will fake a limp to distract a potential predator.

They will often stand on their hind legs to browse. They are sedentary, with no seasonal or even daily movements. They usually feed regularly during the day, but sometimes have nocturnal activity. The Pampas deer are very curious and like to explore. Although this is endearing to observers, their lack of fleeing at the sight of humans leaves them vulnerable.

Pampas deer have been seen eating new green growth, shrubs, and herbs. Most of the plant life they consume grows in moist soils. To see if Pampas deer compete with cattle for food, their feces were studied and compared to cattle feces. It was discovered that they eat the same plants, but in different proportions. The pampas deer eat less grass and more forbs (flowering broad leafed plants with soft stems) and browse (shoots, leaves, and twigs), respectively. During the rainy season, 20% of their diet consists of new grasses. They will move with the availability of food, particularly the flowering plants. The presence of cattle increases the amount of sprouting grass, which is preferred by Pampas deer, furthering the idea that the deer do not compete with cattle for food. Opposing research shows that Pampas deer avoid areas inhabited by cattle, and when cattle are absent have much larger home ranges. 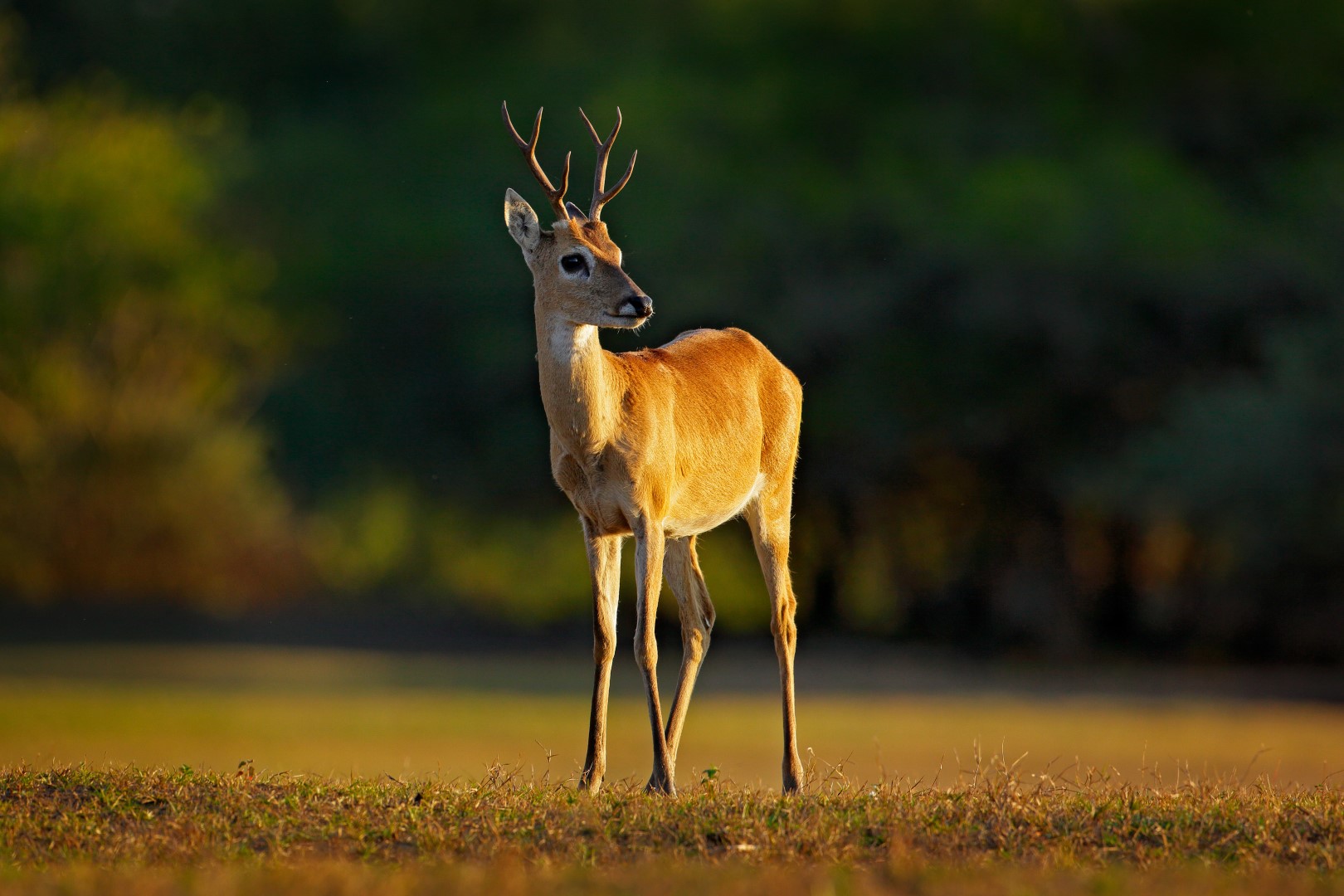 The Pampas deer subspecies O.b. celer of southern Argentina once were very abundant but now are considered a threatened species by the IUCN. The diseases that particularly plague O. b. celer are gut parasites and foot and mouth diseases. Their overall decline is due in part from hunting and poaching, but also from habitat loss due to agriculture, possibly – diseases from domesticated and feral livestock, competition from more recently introduced stock and game animals, dog attacks and general over-exploitation. There is less than 1% of their natural habitat left that was present in 1900. The deer in Argentina and Uruguay have no natural predators. They once were prey of cougars and jaguars. Those in Brazil still have cougars to contend with. Some areas of population loss are easily tracked to poaching because of the few number of deer in an area. In the mid-1970s, 10 individuals out of a group of 16 located in Punta Medanos were killed by poachers. The rest were wiped out by extensive human activity. Lack of funding and technology have made it difficult for biologists to track and help the deer population, but donations and grants from organizations and universities in the United States have helped immensely with the situation. In 1975, there were less than 100 of southern Argentinean subspecies O. b. celer, but by 1980 there were 400. The population has been continuing to slowly increase. Similar to some of the other South American deer species that have fragmented populations there are discrepancies with documented numbers of O.b. celer due to the fact that isolated herds that weren’t known to exist have been recently discovered. Trapping and relocation of Pampas deer is also being conducted and herds have been re-established in national parks and regions where they previously existed.

Scientists (2020) have discovered new populations of Pampas deer in the savannah region along the southern edge of the Brazilian Amazon, hundreds of miles away from the species’ known historical range. The findings illustrate the need for more detailed studies to assess the deer’s conservation status and that of other unrecorded species. While finding new populations is exciting news, it’s tempered by the fact that the largest of those groups is in an area known as Brazil’s Arc of Deforestation, where the land is fast being taken over for agriculture.

Locals often blame the deer for outbreaks of disease in their livestock, particularly the disease brucellosis in cattle. In one instance, the Uruguayan government was going to kill some of their Pampas deer population. Research by field veterinarians had shown that Pampas deer rarely carry the disease, so the government allowed time to assess deer health. The veterinarians ultimately proved that the deer pose no threat of spreading disease to livestock. 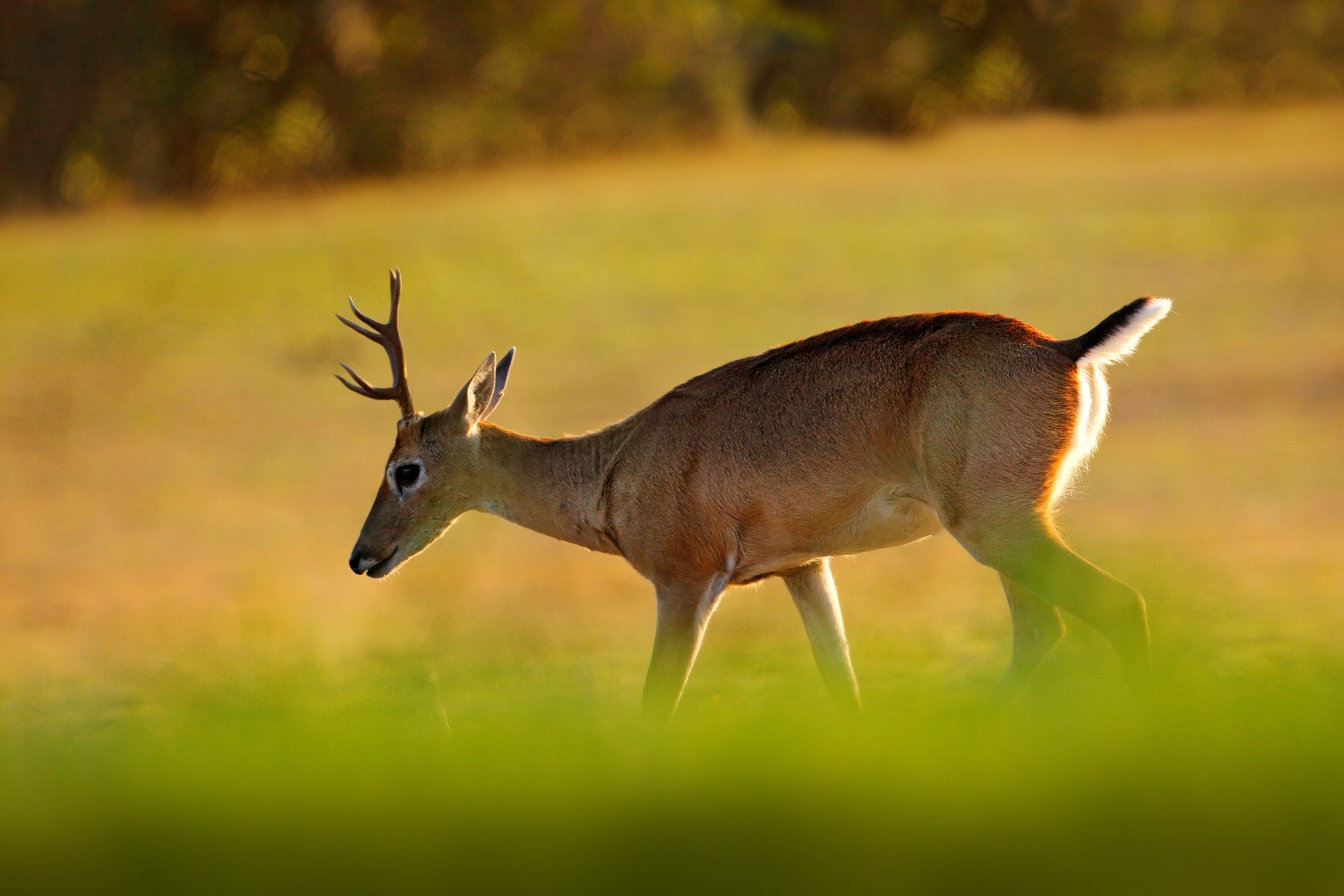 Trade for commercial purposes is banned. Pampas deer are legally protected in Argentina, and they have a private and federal reserve set aside for them however in some isolated areas hunting has still been allowed. In some areas, strictly controlling poaching is all that was necessary to quickly increase the population size. Increasing public knowledge and controlling road building has also helped. They reproduce well in captivity.
The Pampas deer have been harvested into the millions. Between 1860 and 1870, documents for the port of Buenos Aires alone show that two million Pampas deer pelts were sent to Europe. Many years later, as roads were built through the pampas, cars made it even easier for poachers to get to the deer. They were also killed for food, medicinal purposes, and for sport. As of 2003, there are fewer than 2,000 of them in Argentina and Uruguay. Both Argentina and Uruguay have declared the Pampas deer “natural monuments” but the hunting continues, although much less frequently now. The decimation of the Pampas deer has been likened to that of the bison of North America. Also similar to the bison, is the role they played in the life of the Native Americans of Uruguay and Argentina, being used for food, hides, and medicine. The Native Americans at first participated in the harvesting of the Pampas deer pelts for sale, and in spite of that, the deer population stayed strong until the Native Americans of those countries were defeated by European settlers. The settlers brought large agricultural expansion, uncontrolled hunting, and new diseases to the deer with the introduction of new domestic and feral animals.

Some landowners have set aside some of their property as a reserve for the deer, as well as keeping cattle instead of sheep. Sheep graze much more on the land and are more of a threat to the deer. The owners that choose cattle are doing it as a service, because more money is made from raising sheep than cattle. Conservationists encourage this trend by sharing research that more edible vegetation is available on ranches with cattle and deer during times of drought than on ranches with cattle and sheep.

I couldn’t locate any outfitter that promotes guided hunting for any of the three species of Pampas deer. I could find no listing of them in game ranches.