Readers of this magazine will have seen articles describing my good fortune in securing free range Otago stags, skilfully guided by Chris McCarthy of Lake Hawea Hunting Safaris. In this my fifth consecutive year of hunting the roar with Chris, I cocked up big-time!

While Chris put me in a position to take the best wild stag that I’ve yet seen on the hoof – an exceptional imperial stag boasting antlers forty-plus inches long with very long points – I flat out missed this stag three times.

While hunting has rewarded me with some of my highest highs, that exceptional imperial is certainly my biggest cock-up to date. This article provides a warts-and-all post-mortem on a failure not easily shared, in painful contrast to the elation one feels in taking a great stag.

We were on the property where hunting was not allowed until last year when Chris gained exclusive access to guide on five free-range Otago stags that averaged a gob-smacking 300 Douglas Score points. Not even in my overactive imagination could I have dreamt up such a place, where stags are in good numbers and the older stags resemble those from New Zealand’s “golden age” of deerstalking.

We arrived at the property on 12 March to find stags already roaring in some areas but not in others. Relatively young stags were accompanying groups of hinds. We figured that the mature stags were hanging back, waiting for the hinds to come into oestrus, at which time they would send the young stags packing! We also saw small groups of up to five stags, still in their bachelor groups as they had no doubt been during the winter, spring and summer.

Over the course of six days glassing for trophies, we located four exceptional stags; three by themselves and one accompanied by two young royals. Three of these stags were in the same areas in which they had rutted last year; a gorgeous imperial stag whose only fault was (seriously) narrow antlers, a wide 15-pointer with five excellent top tines on his left antler though not mirrored on his right, and a long 13-pointer.

The fourth stag we spotted was the exceptional imperial. We were immediately in hunt mode and far too preoccupied to photograph this stag but you will get an idea of the quality of the antlers from the photo provided, which is of another imperial that we had passed on some days earlier; after assessing that stag as a ‘youngster with potential’.

The next hour was a mad rush to get within range of the exceptional imperial but the light beat us. The following day we took up a vantage point high above our last sighting of the stag and sure enough, Chris spotted him in the mid-afternoon crossing between two patches of beech forest. The stag had chosen his sanctuary well with approaches from above completely exposed to view, on slopes of loose shale and with the wind in his favour.

The challenge was again to get within range. As it turned out the only viable option to avoid spooking the stag was to shoot at a steep angle from a cliff face at just over 400 meters. The stag appeared several times on the edge of the beech forest, picking his way through the tangle of foliage with those tantalising antlers rocking this way and that, before finally presenting the perfect opportunity for a broadside shot.

Shooting in a prone position over a Harris bipod with the Leupold scope set on twelve power, I was naively confident. After my first steady shot I was shocked when Chris said the stag hadn’t move a muscle. My hurried but still steady second shot sounded like a hit but the stag immediately galloped off towards another patch of beech. My third (hopelessly misdirected) shot saw him enter the beech from which he appeared not to emerge.

I was devastated but held some hope that the stag may have fallen there. We knew that following up a wounded animal straight away was ill-advised, so it was back to camp with a very sick feeling in my gut. After a restless night we returned to search the entire area carefully. We could find no trace of blood let alone the stag. 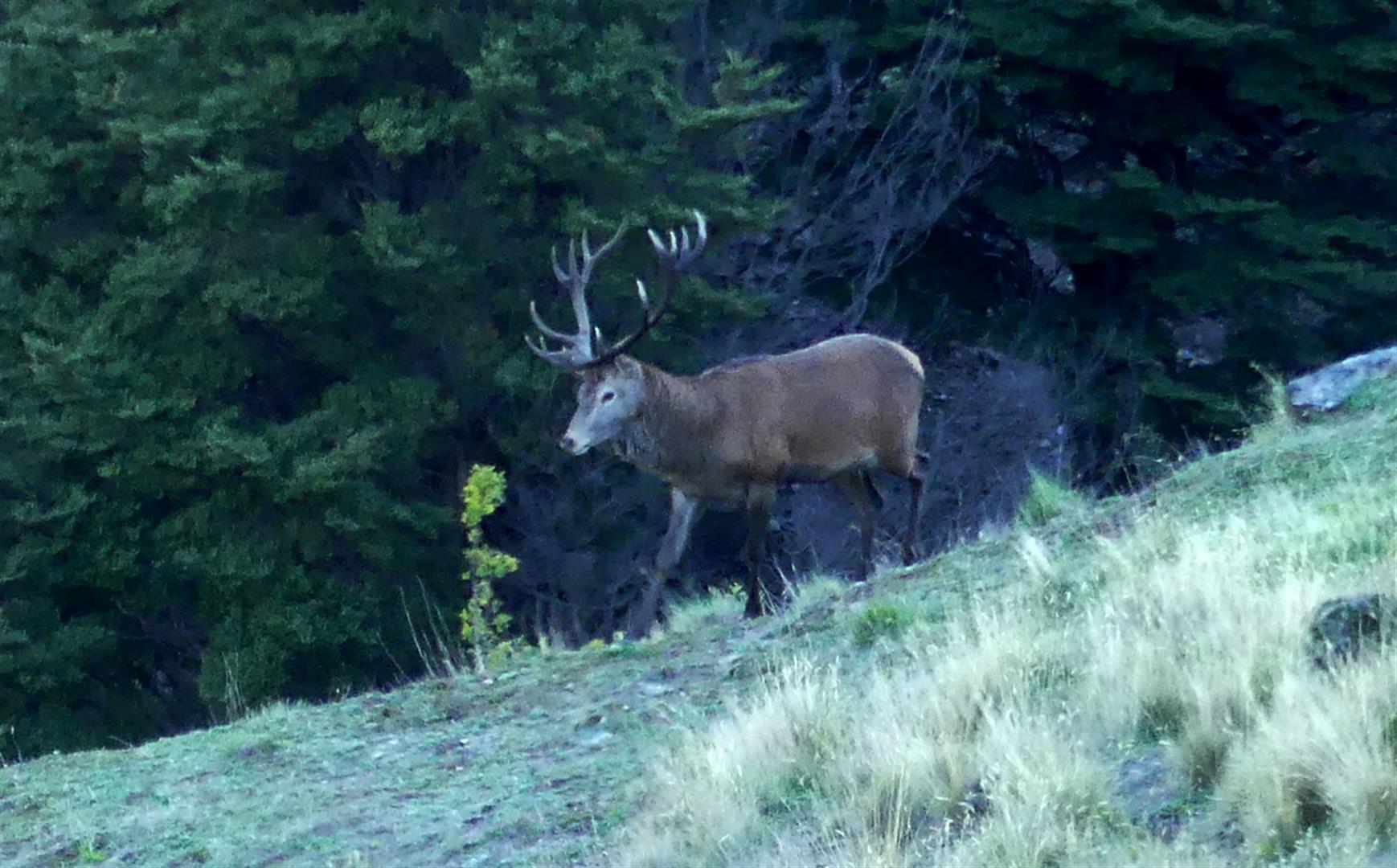 I was absolutely disgusted with myself. Like most hunters I take pride in killing my quarry cleanly. Anything else is a FAIL. Had I wounded this magnificent stag for him to perish unseen in some damp gully? I was angry with myself. I was dejected. I was inconsolable. Hauling myself back off that mountain was way tougher than it had ever been.

I was using a Browning 270 with Hornady 130 grain Superformance ammo. I was confident in my aim for the first two shots … how could I miss … rifle zero, wind, trajectory issues? The rifle’s zero was bang on the next day so no issue there. It had been gusting strongly all week but the shots were taken in the lee of the mountain so I don’t think wind was an issue.

That left trajectory … with the rifle zeroed 3 inches high at 100 meters, I’d allowed for bullet drop of 15 inches at 400 meters. I’d heard that bullets rise when shooting at steep angles but I didn’t give this a thought at the time. In fact, rather than rising, the research shows that bullets drop much less than what you would expect for the same distance in flat terrain.

The precise shooting angle is anybody’s guess but if it was about 35 degrees as I suspect, then the effective distance for estimating drop was about 330 metres (or 400 metres x sine 35o for the physics buffs). This means that I should have allowed for only a 6 inch drop. My first two shots likely sailed just over the back of the stag.

This theory has not helped me sleep nights as I’ve played this cock-up over and over in my head. Bottom line; I was illprepared. A few days after I returned home, Chris let me know that he had seen ‘my’ stag a couple of times since my departure and, while the animal was as cagey as ever, he was unscathed.

This was an enormous relief but a month later as I pen this article, the disappointment in myself remains raw. I had let myself down and since there was no trophy fee, I had also let down a hard-working guide and a gracious landholder. The truth is simple. I have no excuses. I was ill-prepared. I need to be more realistic about my ability as a once-a-year hunter and this does not extend to long-range shots where the risk of wounding an animal is simply too high.

I know this will likely mean missed opportunities as great stags don’t get old without being cagey, but I’m good with that … and so no-one starves in future I’ll happily pay a trophy fee just for the privilege of stalking such noble animals.

On a bright note, the landholder takes a keen interest in Otago deer and asked us to cull a massive-bodied eight-point stag of questionable bloodline that was accompanying more than forty hinds. The
stag was roaring like a red deer but was the size of an elk. Chris’s sharp-eyed support guide, Bill Metivier, did us all a great service by clobbering this stag.

Good news also is that Lake Hawea Hunting Safaris has had another bumper roar with fortunate hunters securing several Otago stags exceeding the magic 300 Douglas Score points. Even so, many exceptional stags proved too cagey and are still out there, including the exceptional imperial that bested me.
I hope to return to this extraordinary stronghold of legendary Otago stags in 2019, a little bit wiser … and with unfinished business.

Only a matter of time by Bella Cervi-Bolwell

Article 5: Success in the rain