I was working at home in the shed in Dec 2016 when I got a message on the phone from my mate Josh saying “How many Dean Wheelers are in Victoria?” what the hell is he on about? I quickly replied as to what he meant and he sent back “Your name is on the list to go to Snake Island next year, you’ve been picked in the ballot!” Bullshit was my first thought but he was very excited so I thought I better check this out.

I had a quick look on the GMA website and bugger me there was my name in the 3rd period on Snake Island, I stood there looking at my phone for ages not believing what I was looking at then it hit me after 20 odd years of never being picked in the Blond Bay Ballot I had indeed won the lottery and was going on the inaugural balloted hunt on Snake Island! 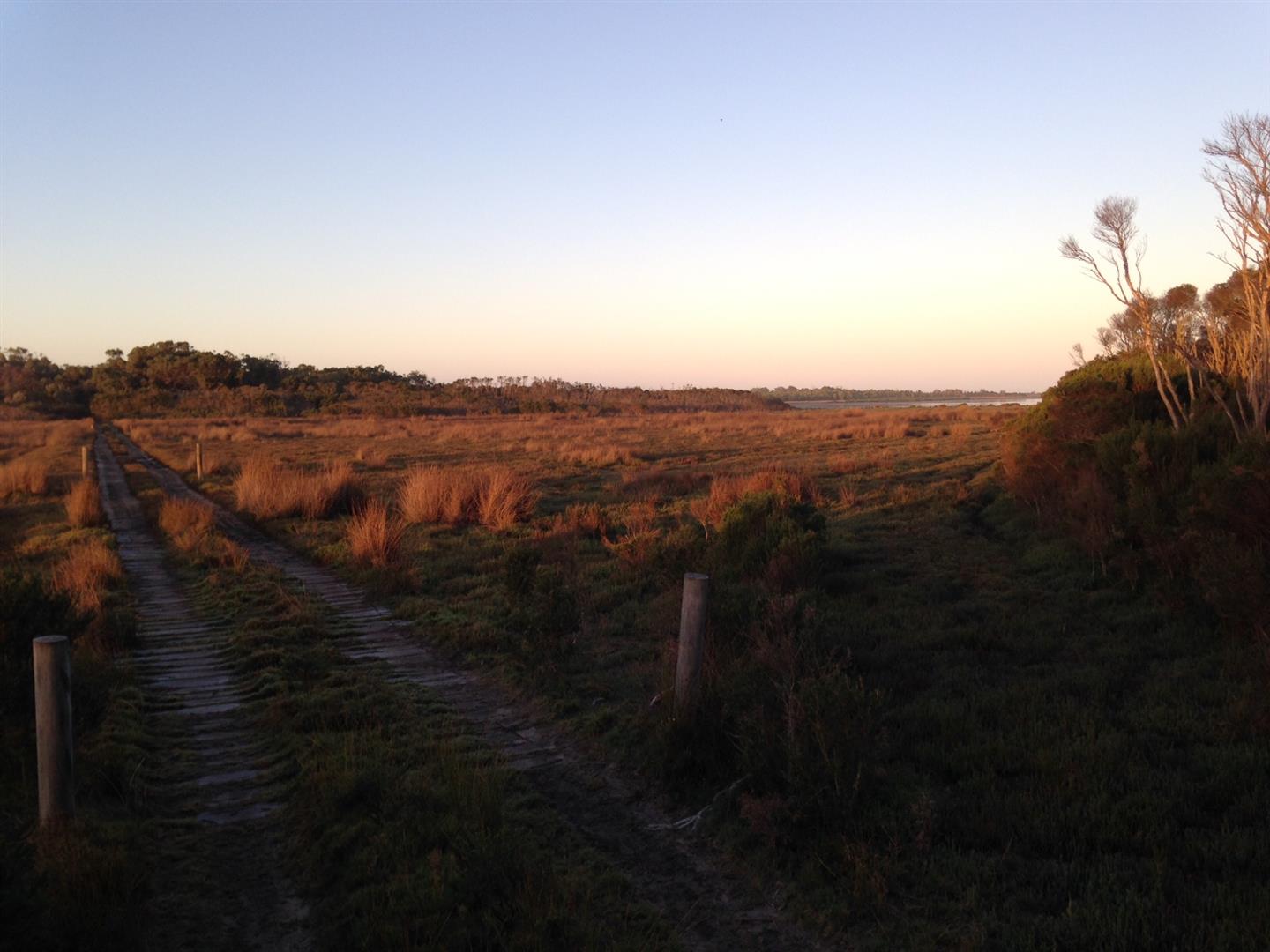 I quickly came back to reality and started getting my act together as it was in March I was going, sure enough the time went quick and before I knew it January was on me and having never been to the island a quick rekey was organized with the Chief and myself heading to Welshpool with the boat in tow early one morning, now boating and myself have a love hate relationship and after I bought my first boat, which I never used, I ended up selling it to my old man who in turn sold it to his brother who I had to ask if I could borrow it back again with the parting words of “There should be plenty of fuel in it!” I should’ve known better but took his word anyway.

Now to cut a LONG story short we did make it to the island and we did have a look around it was just the getting back bit we had dramas with, Luckily we were helped out by a very helpful chap that run me back to port to get more fuel leaving the chief bobbing around somewhere near Sunday Island happily fishing away till we got back with the extra petrol, still I supposed it added to the adventure and certainly set the tone for things to come!

After the Info day which was held in late January and getting to meet all the other hunters in the 3rd period, it was all go with preparing the last of my gear and pumping as much info out of my mates that had hunted hoggies before as I could, then on Sunday the 5th of March it was down to the port for our tags and last minute advice from the GMA guys then off we went. Because its a very tide dependent spot we could only head over on high tide so we all had to idle around in the channel till the water was high enough to get to the waters edge without dragging the tinnie over a Kilometre of mud. 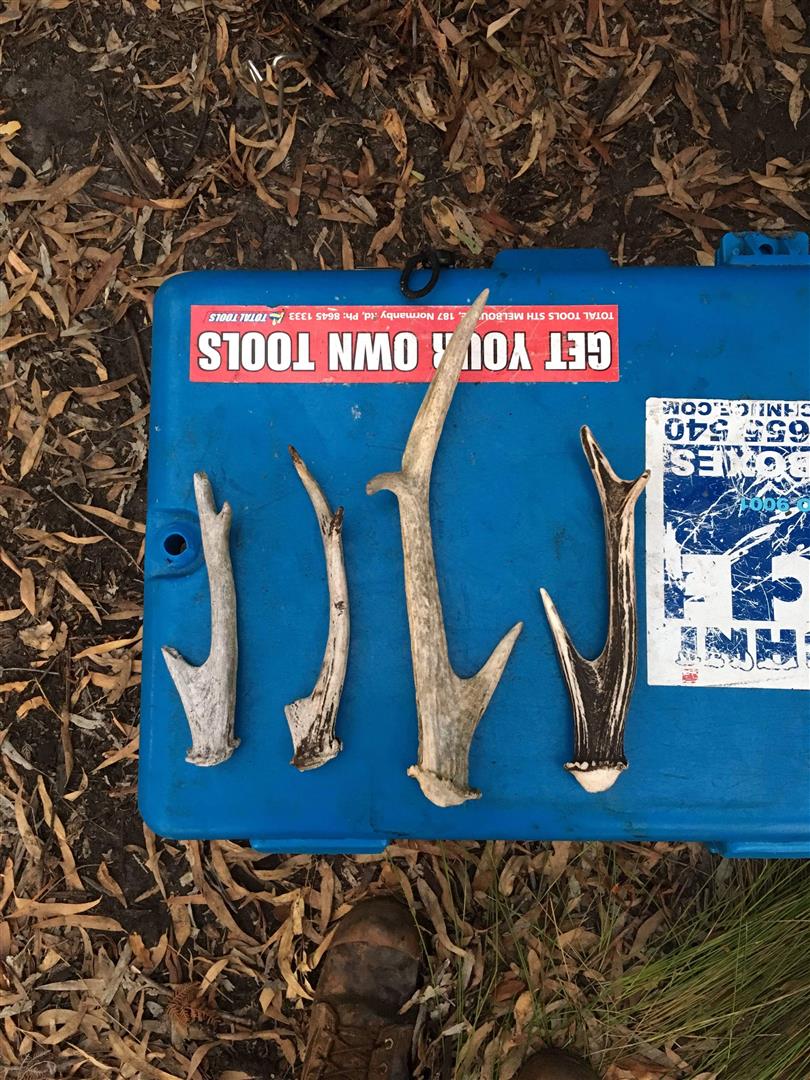 I tied the boat up grabbed my gear and said good luck to Trevor, who I’d travelled over with, and then was off hoping to try and cover as much ground as I could, this was mistake number 1. After running around like a headless chook bumping into other hunters doing the same thing and seeing a few deer I’d came to the conclusion that I needed to stay in the one spot and concentrate on one area instead of trying to cover lots of ground so I caught up with Trevor and we worked out a plan. I’d heard from Daryl on the other side of the island and he and his mate had both shot stags each and were just looking to shoot a hind each then head home on Thursday. So Wednesday arvo I headed to Cow swamp for a look and sat on the paddock for a few hours with no luck so making my way back out toward camp I heard the unmistakable whistle of an alerted hog deer and looked off to my left to see a 14-15” stag making a getaway I quickly ran ahead to a slight rise hoping to get a look at him and to my surprise he’d run right past a bigger stag that was standing staring straight at me, up went the rifle and there he was in the scope crosshair quartering his shoulder and BANG, nothing he’s still standing there, cycle the pump, deep breath and BANG, still standing there WHAT? With that he causally trotted off, I ran over and began scanning for signs of a hit and after nearly standing on a hind and watching her run away I looked till dark with no joy a clean miss.

When I got back to camp I began pawing over some old maps I had and found a waterhole that wasn’t on any other maps we had so with Trevor in tow we headed off in the morning to find it. After a lot of bush bashing we finally found it a small waterhole that looked like a herd of sheep had been there I even picked up a casty lying in the bank, this was the spot! I stayed there, while Trevor hunted further up the gully, till dark then headed back picking another casty up on the way and only seeing wallaby’s and nothing else. Meanwhile Daryl rang and had no luck getting a doe at the dam they’d been sitting on so he was heading home in the morning and I was welcome to use his hide he’d built on the other side of the island, so with that I told Trevor to sit on the dam we’d found tomorrow and I’d head over to the opposite side of the island. Next morning at high tide I wished Trevor good luck and headed off, I found the blind exactly where Daryl had left it and started heading over to the dam with it hoping 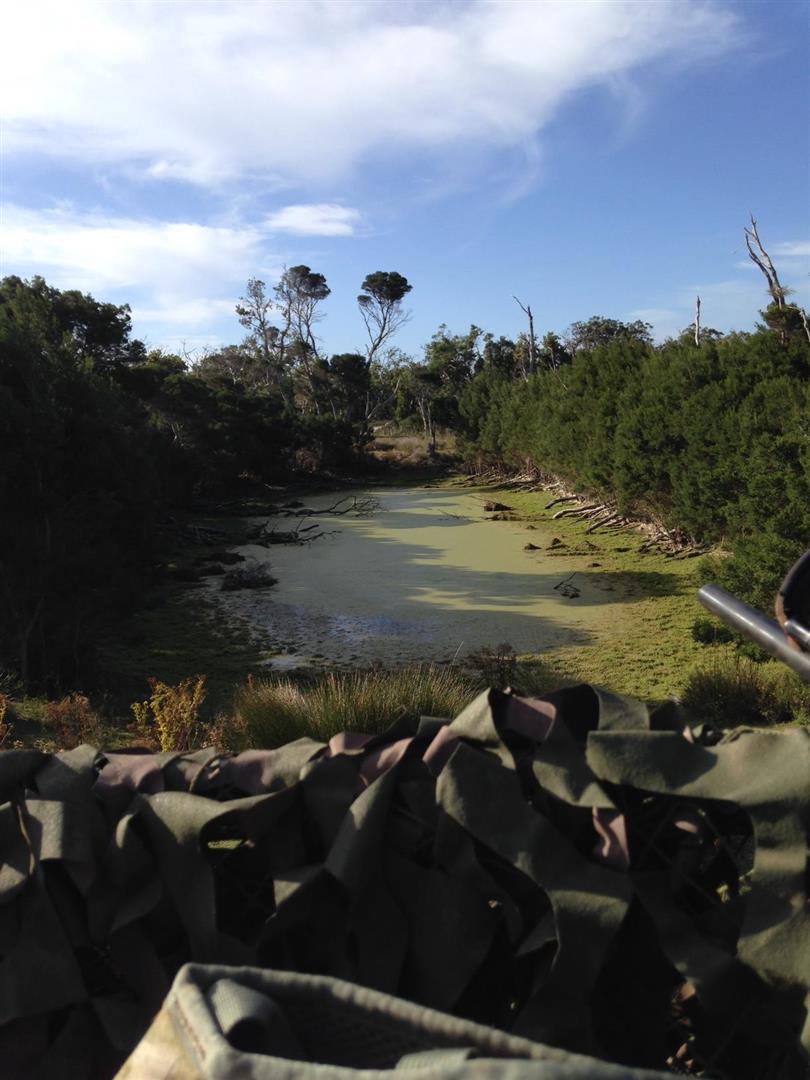 for some better luck at the new spot.

Reaching the dam with my blind in tow I noticed an orange hat sitting in the tussocks, bugger someone had beaten me to it! After I introduced myself I said to Jack if he wanted he could use the blind as he was there first, which he was more than happy to do, so we set it up and I left him to it heading off to check some bigger flats out I seen on the map the day before.

By now it was 2pm and was getting quite warm so I found a shady spot and had a rest for 20mins even having a snooze for 5-10 mins then was up and off again I’d only gone a short distance when on the edge of some manuka something was moving a quick look with the bino’s confirmed it was a hog deer and it was a stag, a small one but still a stag! A quick check of the wind which was in my favor and it was on, I closed the gap to about 50-60m and had a great view of him side on so I even got down on one knee and had a very steady rest with the 1-4 scope cranked right up he looked great then off with the safety, and after having a quick flashback to the stag the other day there was no way that was going to happen again, I gently squeezed the trigger BOOM, nothing deer still standing there feeding, NO, NO, NO this can’t be happening where the hell is this thing shooting I quickly reloaded and once again the same result 3 shots I had at this deer and I’m not even scaring him, Things were getting desperate what to do, think, think with only a grassy bank behind him I had no indication of where the shots where landing so I thought bugger this I aimed low and about 6” in front of his front leg and squeezed the trigger BOOM down he went this must either be the unluckiest, dumbest or deafest hoggie that was ever born. 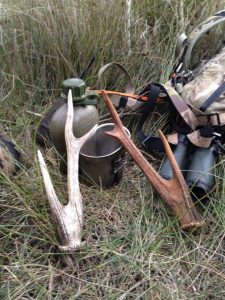 I ran up to where he was and found him laying a few feet in the scrub, very dead. Wow what a relief that was, I quickly gutted him and fixed my tag to his hind leg and started the long walk back to Jack. On reaching the dam I was greeted by the sight of Jack dragging a very handy looking 1213” stag up onto the bank and to say he was excited was certainly an understatement and he quickly retold his story on how the hunt went then I helped him cape out his stag and we went our separate ways back to our camps. Jack later sent me a photo off his phone of a very handy stag he’d seen on his way back to camp, always happens when you least expect it.

Trevor on the other side of the island had faired much better having seen 4 deer at his waterhole including a very large stag that he couldn’t get a shot at but scoring a very nice 14” stag right on dark which he was wrapped with. I got back to camp and wrapped my deer up to keep the blowies off him and went straight to sleep absolutely exhausted. The following morning I took the blind down and towed it back to Daryl’s hiding spot for him to collect later then packed all my gear into the tinnie and waited for high tide so I could head back to Welshpool to check my stag in and catch up with the other boys and swap some stories.

After all this action for the week and the highs and lows I have no doubt that I had the time of my life over there and to see all the other hunters all get a deer was great, especially Gavin who covered as much ground as me in the first few days. 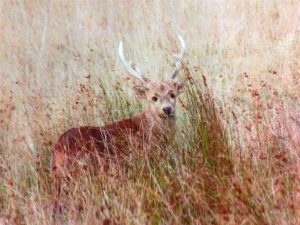 My congratulations go to the ADA for all the hard work they’ve put in to get this up and running and I know some of the hurdles they had to get over were great, well done Boys!

And what happened to my rifle? Well it didn’t end up in Bass Strait or wrapped around a tree but it was shooting 1ft high and 2ft to the right at 50m when I test fired it at home how this happened I don’t know maybe it got knocked around in the boat? I’ll never know. If the one thing I’ve learnt on the island was that you can’t hunt hoggies like sambar meaning you have to let them come to you, find a nice out of the way waterhole and be prepared to wait and wait!

When ferocious grass thrashers are ready for a sta

When a great siloette comes together, it looks alo

Bowhunting a Water buffalo solo is enough to get a

Just off his preach pad, Luke sat waiting for a st