Brocket deer are medium to small in size, and are found in the Yucatán Peninsula in Mexico, Central and South America, and the island of Trinidad. Most species are extremely secretive, elusive and primarily found in forests. They are similar to the African duikers and the Asian muntjacs, but unrelated.

As recently as 1999 some authorities only recognised four species of Brocket deer. These four “species”, M. americana, M. gouazoubira, M. rufina, and M. chunnyi, included several distinct populations that subsequently were elevated to species status, resulting in a total of nine different species being recognized in Mammal Species of the World in 2005. A tenth species, M. nemorivaga, has traditionally been included in M. gouazoubira, but this was shown to be mistaken in 2000. M. nemorivaga was not recognized as a separate species in Mammal Species of the World, but this was apparently in error. Yet another species, the fair brocket (M. tienhoveni), has recently been described from the lower Amazon basin. What may be an undescribed small species of brocket with a reddish coat and blackish legs has been photographed in the lowlands of Manú National Park in Peru, and based on observation records may also occur in northwestern Bolivia 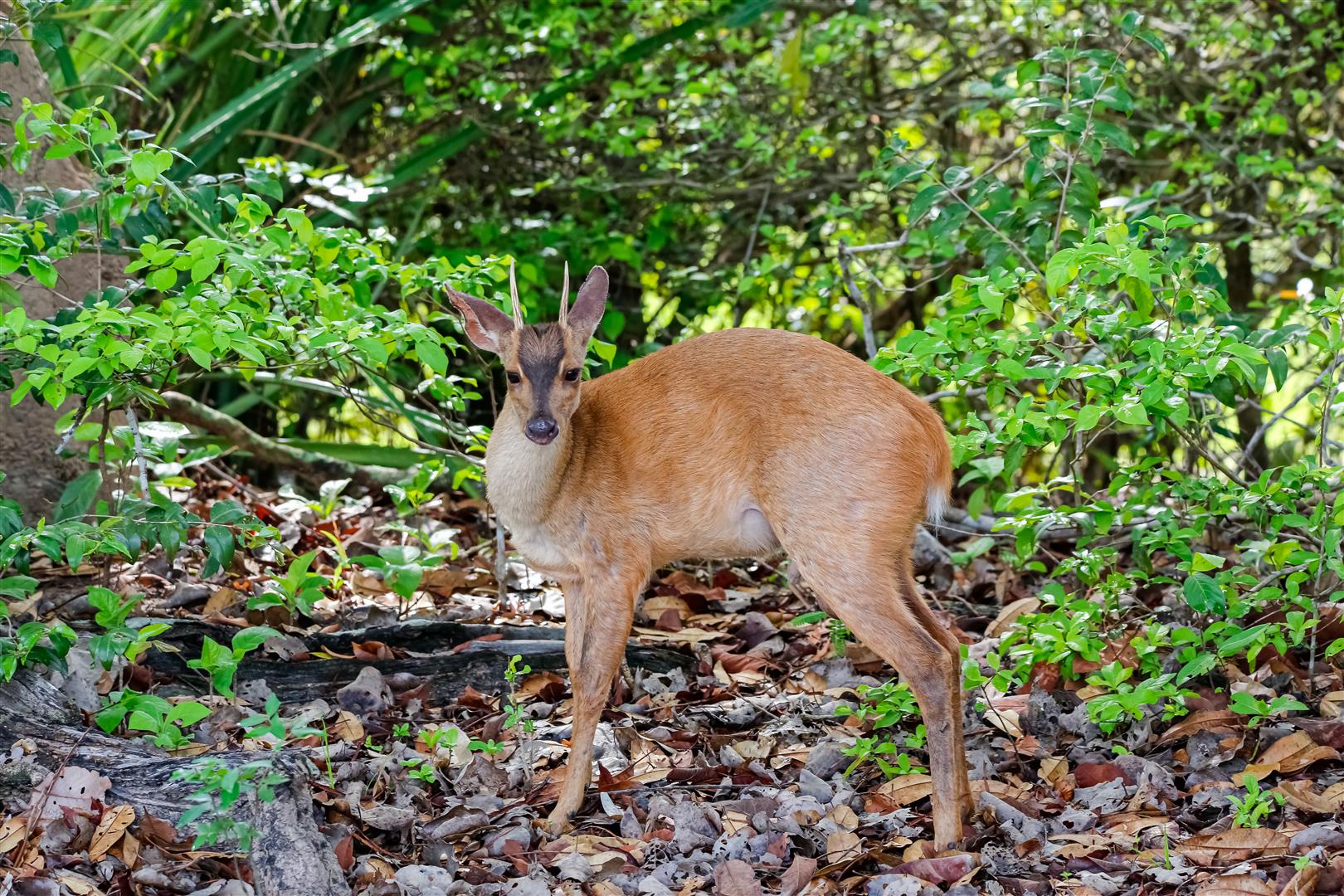 Molecular dating suggests that the family Cervidae (deer) originated and radiated in central Asia (generally accepted, and commencing from what we now recognise as Sika deer). According to the systematic relationships and evolutionary history of neotropical deer, at least eight ancestral forms of deer invaded South America approximately 2.5 – 3 million years ago, and members of the red brockets had an independent early explosive diversification soon after their ancestor arrived there, giving rise to a number of seperate species.

Careful genetic analysis of all species of Brocket deer seperate them into two lineages where one lineage originate from either North, Central, and South America, whereas the second is composed of South American species only. There is a very real chance these two separate groups could be reclassified in the future. 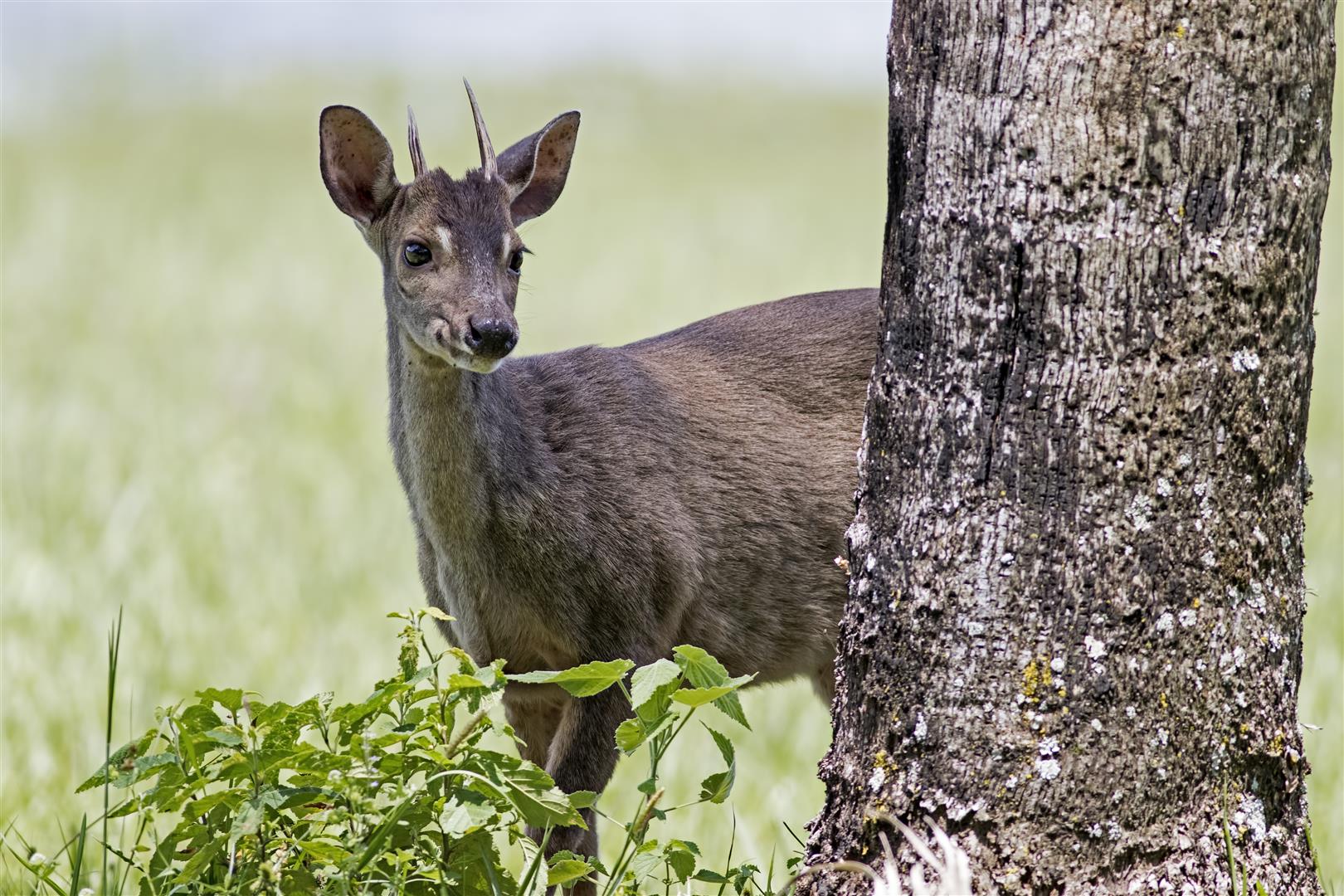 Depending on species, brocket deer are small to medium-sized with stout bodies and large ears. The head-and-body length is 60–144 cm (24–57 in), the shoulder height is 35–80 cm (14–31 in), and the typical weight 8–48 kg (18–106 lb), though exceptionally large M. americana specimens have weighed as much as 65 kg (143 lb). When present, the antlers are small, simple spikes. The pelage varies from reddish to brown to grey. Very roughly, the species can be divided into four groups based on size, colour, and habitat (but not necessarily matching their gene evolution – phylogeny):
• M. americana and M. temama are usually found in forest. They are relatively large to medium brocket deer with a reddish to reddish-brown pelage. The head, neck, and legs are often greyish or blackish.
• M. gouazoubira, M. nemorivaga, and M. pandora are found in forest, woodland, and shrubland. They are medium-sized with a brownish to greyish pelage and pale underparts.
• M. nana, M. bricenii, M. chunyi, and M. rufina are found in forest and high-altitude grassland (M. nana in Atlantic forest; the remaining species in Andean cloud forest, elfin forest and páramo). They are medium to small in size, and the pelage is reddish. In most, a part of the legs and the upper part of the head are blackish or dark grey, but in M. chunyi, the foreparts and neck are also blackish or dark grey.
• M. bororo is found in Atlantic forest in southeastern Brazil. In appearance, it is intermediate in appearance between M. americana (first group) and M. nana (third group). 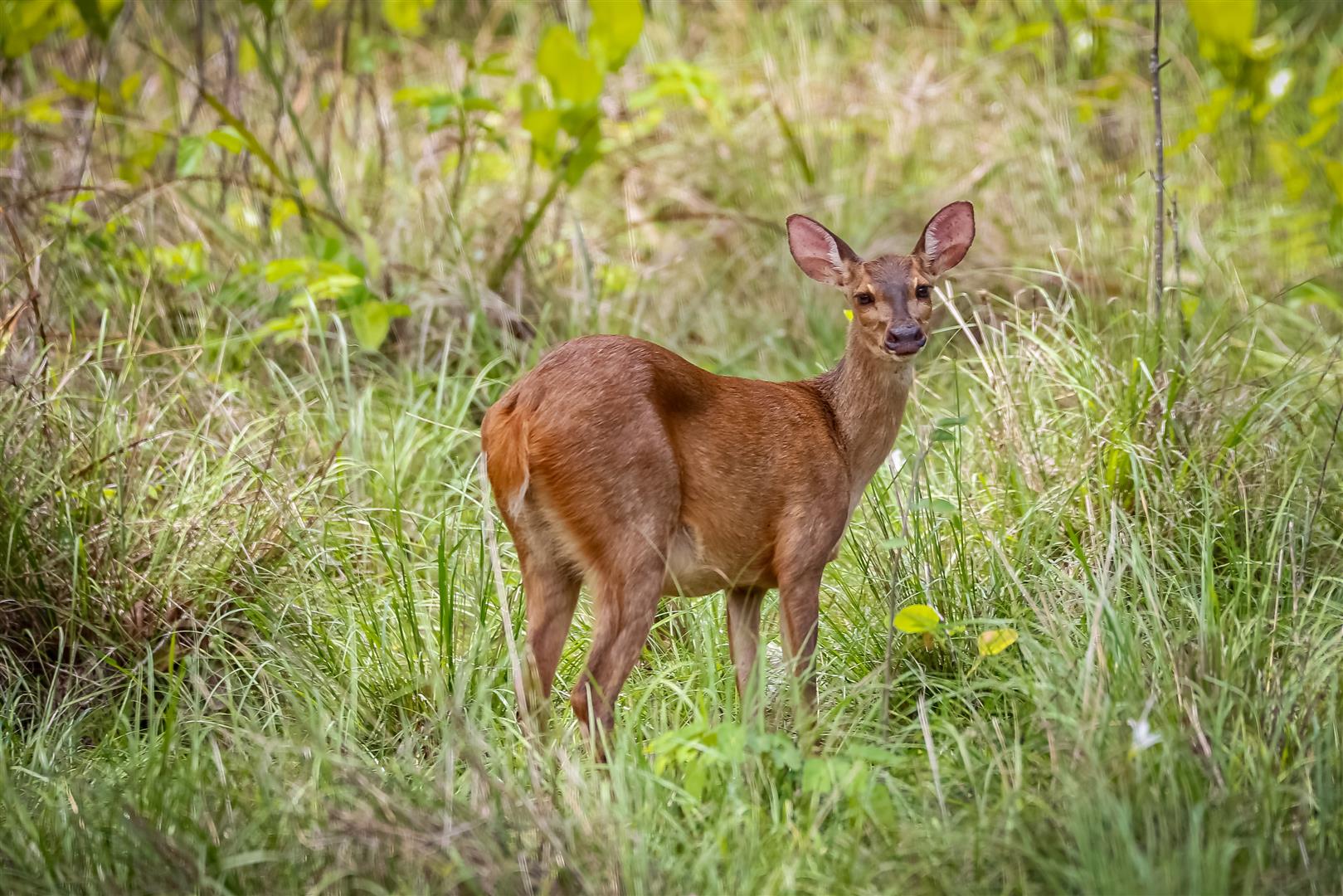 In addition to being small and nocturnal, Brockets are shy and rarely observed. They are found living alone or in mated pairs within their own small territory, the boundaries usually marked with urine, faeces, or secretions from the eye glands. When threatened by predators (primarily the cougar and the jaguar), they use their knowledge of their territory to finding hiding places in nearby vegetation. As herbivores, their diet consists of leaves, fruits, and shoots. Mated pairs that live together remain monogamous – this is extremely rare in the deer world. Single male deer usually mate with nearby females. When males compete for a mate, they fight by biting and stabbing with their short antlers (comparable to Muntjacs). Similar to most tropical deer – Brocket species that live in tropical areas have no fixed mating season. Those in temperate areas have a distinct rutting period in the autumn.

Several hunting outfitters offer trophy hunts for Brocket deer. Hunting for wild, free-range Red and Brown Brocket deer is available in Mexico starting from US$3,250. They are also available in Argentina where the Red, Brown and Dwarf Brocket may be hunted. Most hunting is performed from blinds where ambush sites are chosen overlooking favoured feed areas. Shotguns are regularly used for shooting due to dense and close cover and also the elusiveness of the species. 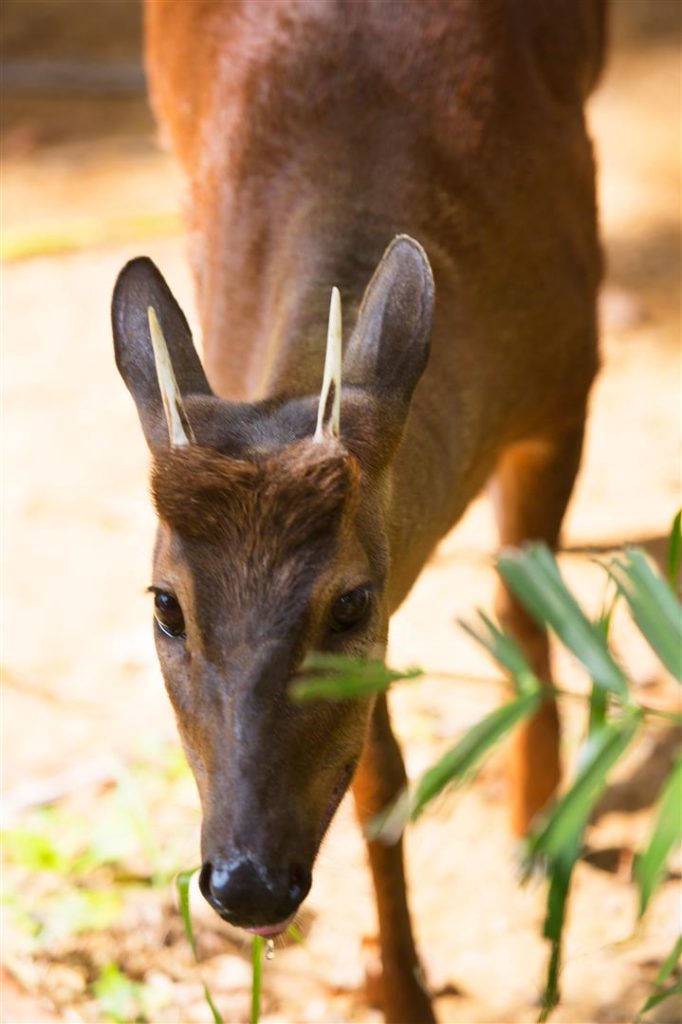