Last year I took my partner and son along on a holiday to the USA, we did the usual tourist thing to begin with – LA and Disneyland, and then we headed over to Wyoming so I could hunt whitetail deer. The hunt was successful and after some minor hiccups with a certain large American airline we eventually went on our way to Mexico and got married with family and friends.

You’re probably wondering why I mentioned the wedding in a hunting magazine right? Well as part of the wedding I was fortunate enough to receive a hunting wedding gift – my lifelong dream – a hog deer hunt.
Fast forward to mid April and I was on a plane heading south from Queensland to Victoria on the earliest flight I could book. I was keen; I didn’t want to miss a minute of my time down south hunting these little elusive deer. Being duck season I’d also arranged post hunt to catch up with some mates and fling some steel shot down range after the deer hunt. 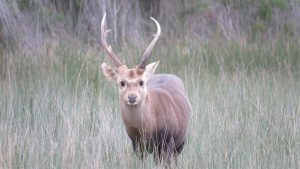 After some issues with the rental car I was running late but finally got on the road. Being standard Melbourne weather I was told the previous day was a sunny day and mid 20 degrees, today was polar opposite being 11 degrees with gale force winds and rain.

It was a bit of a mission looking after the rental car with branches coming down or the ones already on the road and dodging them. I definitely didn’t want this trip being wrecked by having to fork out extra money because of mother nature and stupid rules made up by the rental car company.

After a few hours’ drive and the obligatory pre-hunt stop for KFC along the way, I finally made the rendezvous point. We drove through a small town and headed further down the road to meet up with the farmer.

Embarrassingly I’d kept them waiting and I apologised for the delay. I didn’t want to get off on the wrong foot to begin with. We got underway travelling further into the property, as we went I was constantly looking for deer. I was in deer mode and was excited. I’d never hunted hog deer before and I didn’t really know what to expect.

I’d done as much pre-hunt study as I could but questions started rolling through my head, how big will they look on the hoof, I wonder how much pressure they’re under, what’s a representative head look like, I wonder how far I’ll have to shoot? All would be revealed soon enough.

Slowly driving along the corrugated road for what seemed like an eternity finally came to an end when we arrived at the farmhouse. It was late afternoon by the time we’d arrived but there was still a few hours light left in the day. My hunt was due to officially start the next day but I was keen to see if I could see some deer, let alone take photos of them.

Over a coffee and a chat with the farmer and his family we got to know each other. I plucked up the courage to ask if I could go and take some photos from a permanent tree stand I saw on my way in close to the farmhouse. He said “sure, maybe you should take a gun”, I thought he was joking and a combination of being excited and not wanting to be rude I just took the camera – big mistake. 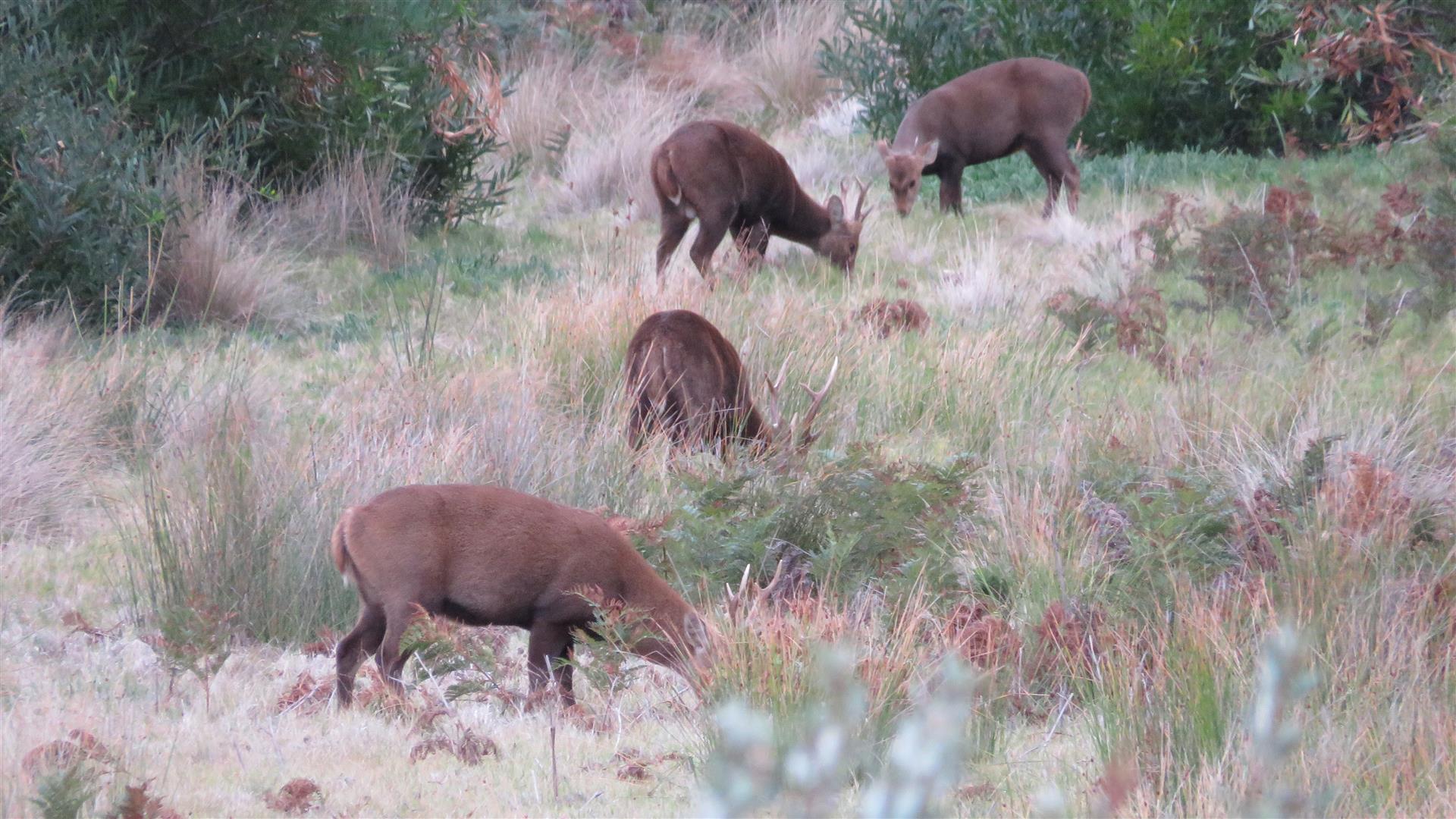 The breeze was in my favour for this spot, which wasn’t planned at all. Climbing up the stairs and into the hide gave me my first sights at the hunting area. I was looking over some clear country in between some thick scrub to my right and fairly open tussock country to my left. Immediately in front of the hide was clearing that was deceiving, it was about 300m long and 60m wide – but didn’t look anything like that until I ranged it all.

After taking it all in I managed to spot my first deer within minutes. It was a stag about 80m away. He was non-the wiser that I was there so I set up my camera and took a few photos and observed his behaviour. Once I saw him I started seeing other deer that weren’t as obvious as the first stag but were slowly feeding their way out from the thick cover.

This clearing had the perfect amount of shelter from the wind and rain. The deer were smart and knew they could feed in this area without wind in their ears and affording them insurance from any predators.

After about 30mins the sun started to go down and I noticed a bigger looking stag walking around further out. I turned my zoom up on the camera to 65x and took a couple of photos. He was big! Watching where he was headed I snuck out of the hide and made a direct line back to the farmhouse. On my way back I ran into the farmer and showed him my photos. He said “quick grab your rifle and get back to the hide, he’s a shooter”, Well did I move! I knew the odds were stacked against me no matter what. That stag wasn’t stopping when I last saw him and as predicted he was gone by the time I got back to the hide.

Bonus was more deer had come out to feed but the down side was now the hide was full of more people than Bourke Street all having a sticky beak having come down from the farmhouse to see what the commotion was about. Nothing of similar size was seen that evening as we all made our way back to the farmhouse for dinner.

I must say for the whole hog deer-hunting trip the food and hospitality was amazing. It was all above expectations and I felt like I was one of the family, even when walking into the kitchen at 5am people were cheery and the coffee flowed.

We had a hearty meal on that cold night and after talking over a couple of beers we headed off to the bunkhouse for the night. Alarms were set for 4:45am with the aim to be out at the hide before sun up at about 5:45-6am.

That night felt like Christmas Eve. I couldn’t sleep due to excitement; before I knew it my alarm loudly woke me up. I sprung up and started getting dressed, packed my backpack and got my rifle ready and headed off towards the kitchen.

A single light was on and the owner’s son was up having a coffee. He’d been away hound hunting with his young son in the Victorian high country the previous night. For someone that had only had 5 odd hours sleep after running around the mountains he sure was jovial.

Slowly but surely everyone else started getting up and making their way into the kitchen. I was to head off for the morning with the farmer back to the hide where we’d seen that big hog deer stag yesterday afternoon.

The weather had got a bit better in that it wasn’t raining anymore but there was still gusting wind which would keep the deer close to cover and holding anywhere that was sheltered. 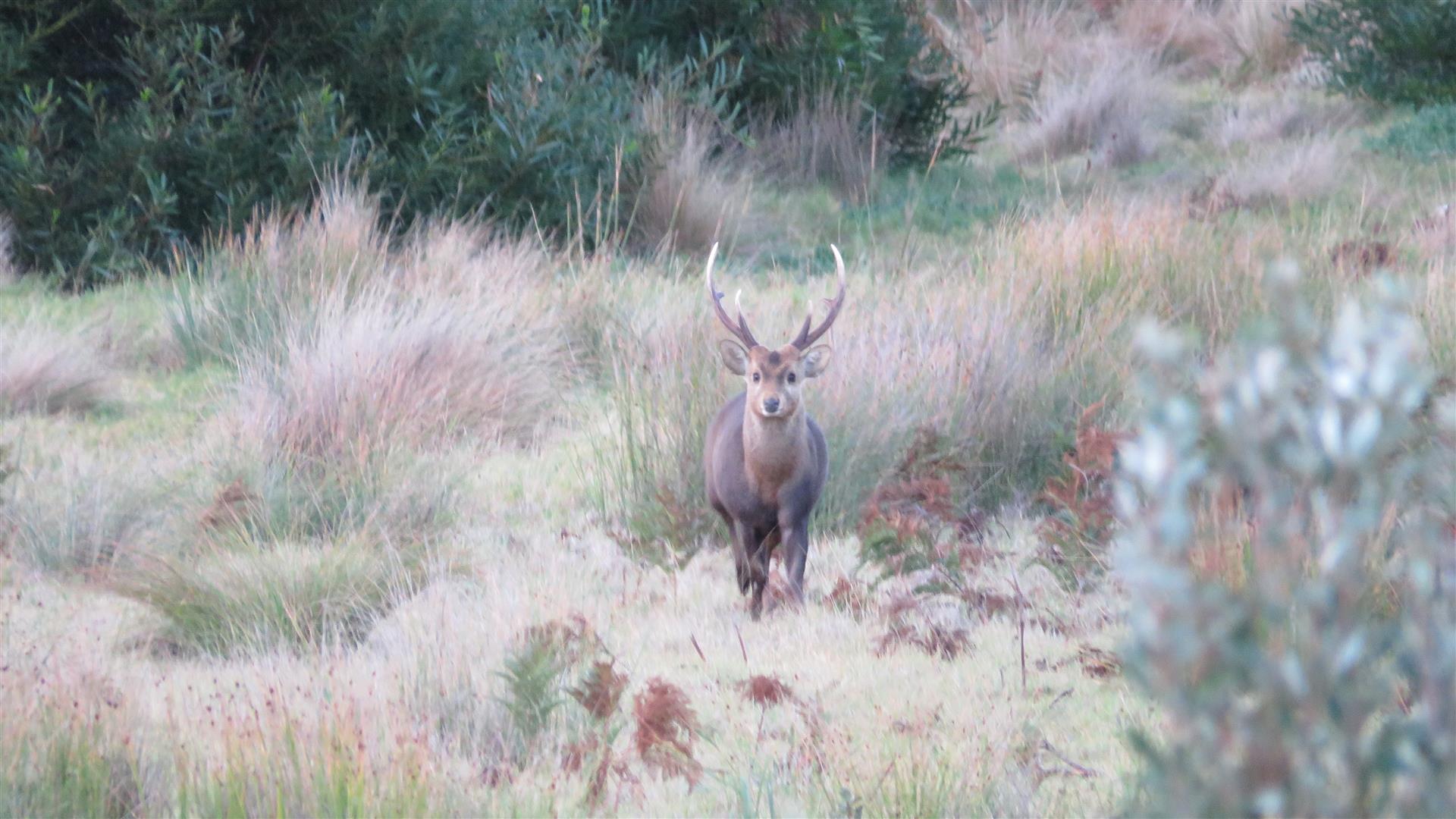 We made it to the hide with the breeze coming across us, which is better than behind us. As per the previous afternoon there was a few deer within the sheltered clearing but the majority were filtering through from the tussock country back towards the thick scrub to bed down for the day.

We spent the next few hours glassing animals in the open tussock country looking for the big stag but to no avail. The sun was well and truly up by now but like clockwork the hog deer kept coming back through the clearing into the thick stuff.

I realised watching this pattern over and over that if a stag that I wanted to take came through the clearing I would only have a matter of seconds to decide and take the shot. My rifle was already pre-prepared to go. We continued glassing.

Eventually a fair number of deer had stayed within the clearing to keep feeding on the green pick. At this point I caught sight of a bigger stag than rest and we looked over him for what felt like an eternity but in reality was probably about 5 minutes.

He was a mature animal with perfectly even antlers but he wouldn’t raise his head, just constantly feeding away even after eating all night out in the tussock country. I took some photos on my camera on full zoom and assessed his potential further, thoughts running through my head.

The farmer said “he’s a shooter, if you want to take him Ben”. I still ummed and arred. The time was now, I’d dreamt of hunting hog deer. All my practice and past experience came down to this point – making the 170m shot in gusting wind on an animal about the size of a Labrador dog.

Blocking out the “deer fever” I sat down and cranked my scope up to 8x and got comfortable. Things happened fast from here, I had a small window of opportunity to take the shot when the stag would cross between two patches of tussock which otherwise obscured his vitals.

I said to the farmer “I’m going to take him”. Just as he got his camera into position to film the shot I fired. The shot felt good. He ducked downwards at the shot with his tail up and bolted for cover. At that point I’d reloaded and spotted a gap in the vegetation where I knew he was headed so I adjusted my aim and when he crossed through the tiny gap I fired again.

Immediately we grabbed our gear and headed down towards the first shot. The farmer asked me how I felt about the shot, I replied “good”. I was full of nervous excitement but I felt the shot was good. We made our way to the spot where I shot at the stag the first time. There was no blood.

I wasn’t worried at the sight of no blood. I’ve seen this before where deer drop little to no blood even when mortally hit. I walked in the direction the stag headed and rounded some bushes. There he was! Not a drop of blood to be found from the first hit to 20m where he lay. 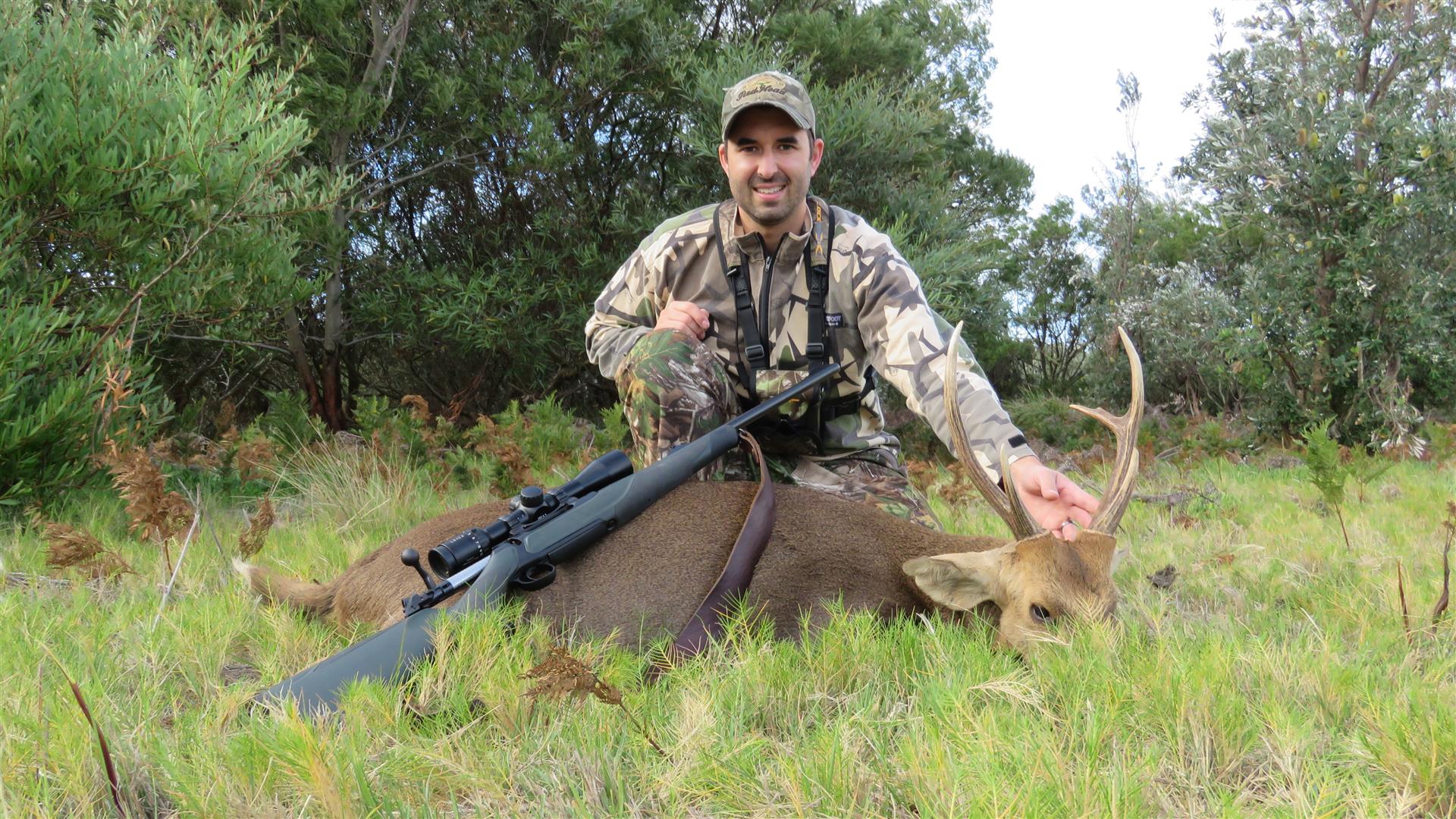 I called out to the farmer “I found him!” He came over and congratulated me and I shook his hand and gave him a hug. I had my very first hog deer stag and what a beauty.

After the obligatory photo shoot we gutted my stag and loaded him back onto the Ute to head into town to a checking station. It was all new experience to me but interesting non-the less.

So within 48 hours of hunting I had seen over 50 hog deer and managed to take a great stag. For the rest of the trip I caught up with some mates and between us we managed to take 30 plus ducks over two days with a 10 bird per person, per day bag limit.

A bonus to this was my mate’s 2 year old pointer retrieved every bird we shot including one that landed 150m out on the lake, She didn’t hesitate at all. Good times had all around the state of Victoria, I cannot wait to get a full body mount for my hog deer stag. 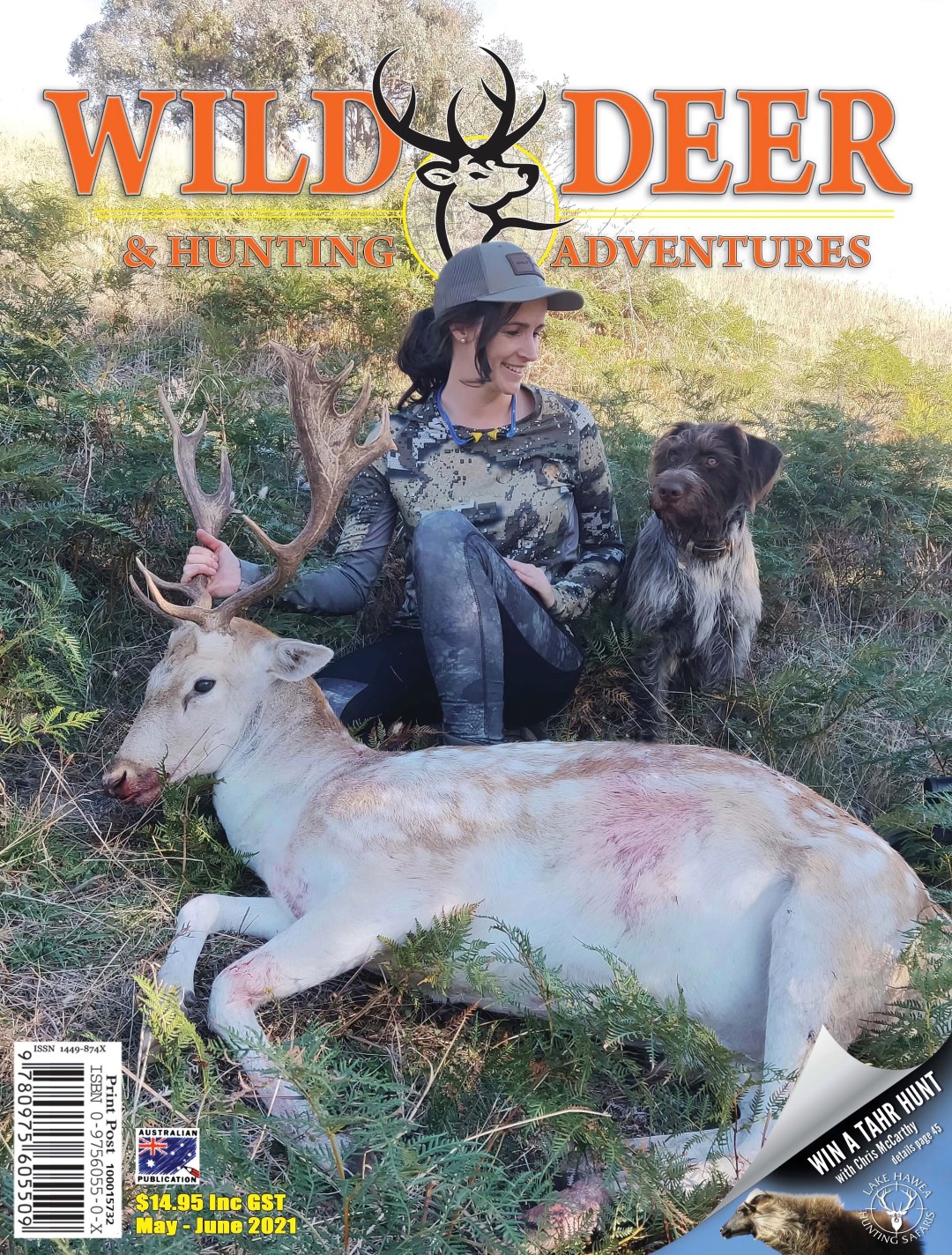 Bringing you a sweet little Friday face brought to

Smiles stretching across all faces where @ben_p33

Friday's Fallow Buck, on the move. Captured well a

Honesty and integrity shown by Brad in his post, s

We always enjoy seeing the next generation learnin