I have been fortunate over the years to have hunted in some majestical places. The Tundra of Alaska, the treacherous Southern Alps of New Zealand, the mountains and open prairie of Montana and the scenic rolling hills of New Caledonia.

But… there is something special about hunting in Australia’s North that is very hard to beat. Is it simply the country we hunt in, the long and endless red dirt roads, the wildlife or the friendly and welcoming country folk we meet along the way? I guess it’s a combination of them all. 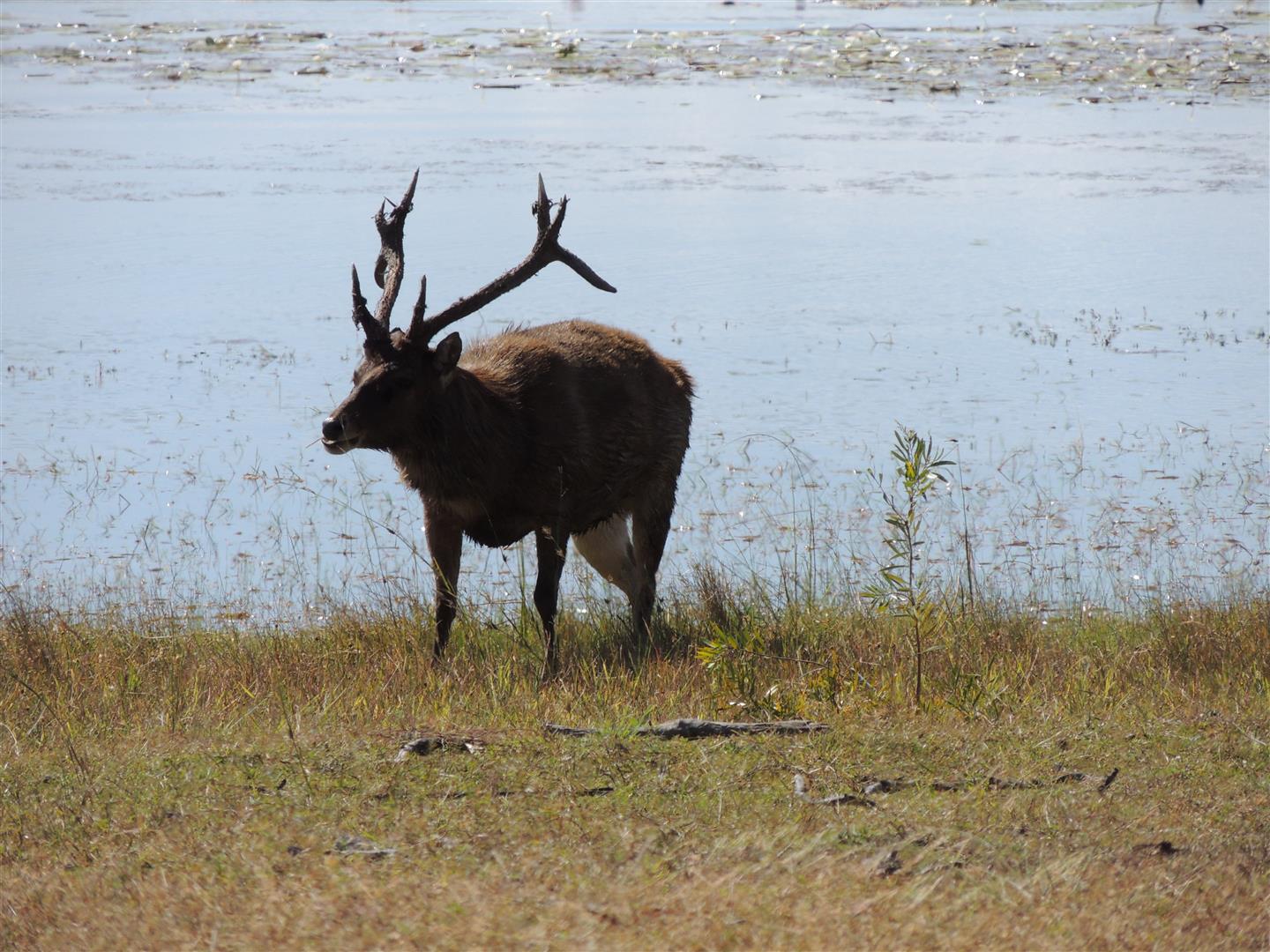 A few years ago a mate showed me some photos of his recent hunting trip up north where he hunted Moluccan Rusa with Nick Cherapanov from NC Trophy Hunting. I have been on two very successful hunting trips to New Caledonia for Javan Rusa, so my thoughts were now focused on hunting Moluccan Rusa in Cape York.
I contacted Nick and we discussed and planned my hunt and it was booked in for late May 2017.

Finally the time was here, I flew into Cairns to a temperature of 26C, the weather somewhat different to the cold and bleak Melbourne day I left behind. I was met the following morning by Nick at my hotel and after loading my gear it was off on a six hour drive to our hunting property in Cape York. After a brief fuel stop along the way we arrived at the property in the early afternoon.

Following an introduction to our very welcoming hosts we unloaded our gear into the accommodation that had all facilities to make the stay very enjoyable. The rooms were spacious and the kitchen, fridge, sink, shower and flushing toilet made it feel very comfortable.

I asked Nick about the purpose of the timber at the base of each doorway, “It’s to keep the snakes out” he replied and I thought let’s hope it works. 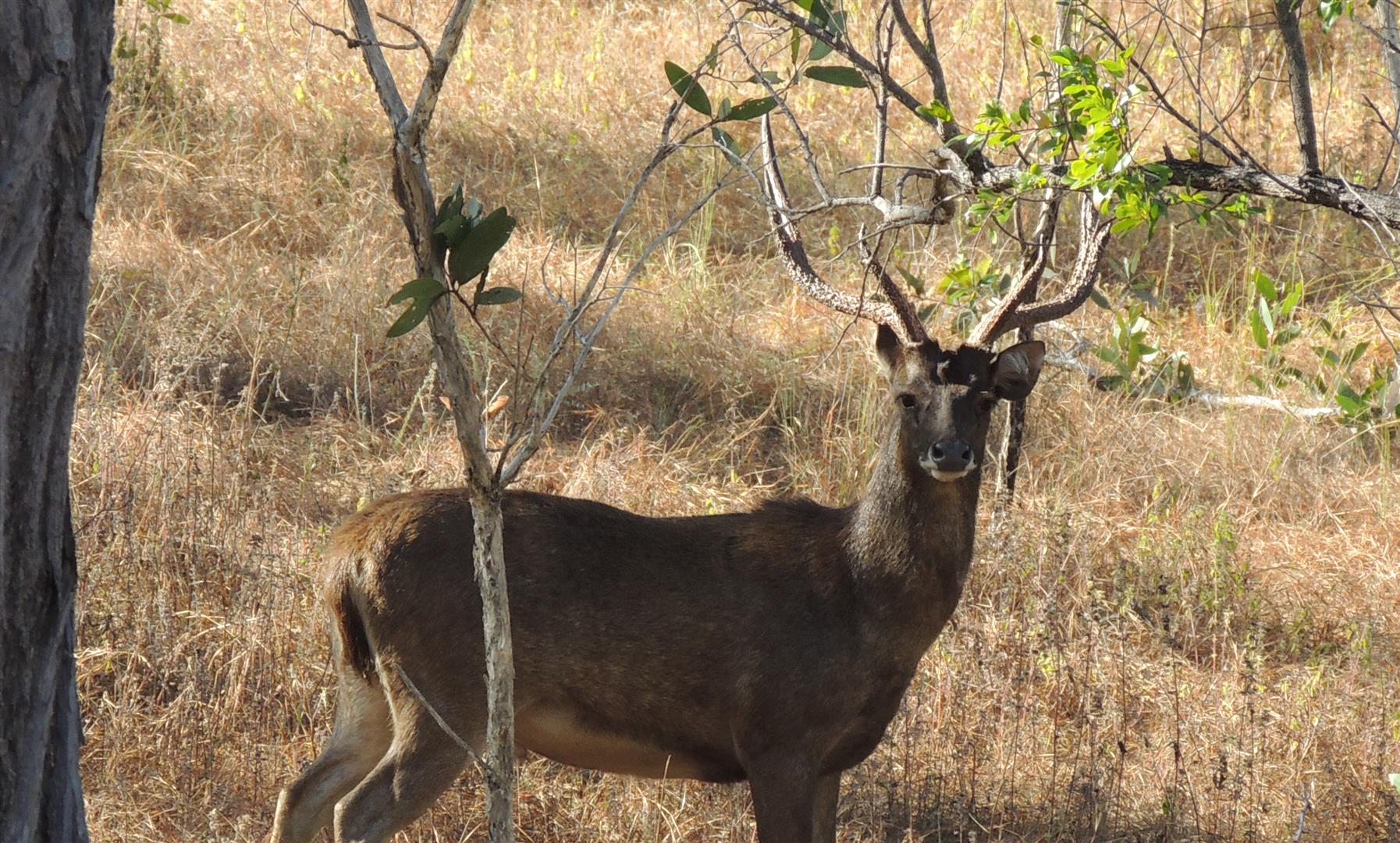 As we relaxed during the warm mid afternoon we noticed in the distance a Rusa Stag slowly heading our way along the edge of the lake which centres around the homestead. Nick grabbed his binoculars for a closer inspection, quickly adding, “He is the multi-tined stag I saw last trip and a good trophy”.

I was always intending to take a second stag should the opportunity arise and targeting a multi-tined stag was at the top of the list. We aptly named him Ol’ Handlebars as the two drop tines off the main beams were perfectly even on an exceptional non typical trophy head.

Soon our stag had wandered into the thick bush and quickly blended into his surrounds but not before I snapped a few shots with my Nikon 42x digital camera.

Later that afternoon we drove several kilometres out from camp to check the swamps and waterways in search of a trophy stag. We saw many stags but none that we wanted to hunt. Many deer were spotted, small stags, velvet stags, spikers, does and fawns.

The following morning we repeated the previous afternoon with again many deer seen. We returned to camp late morning and while having an early lunch we spotted a mob of pigs on the far side of the lake wading in the water eating the lush foliage. 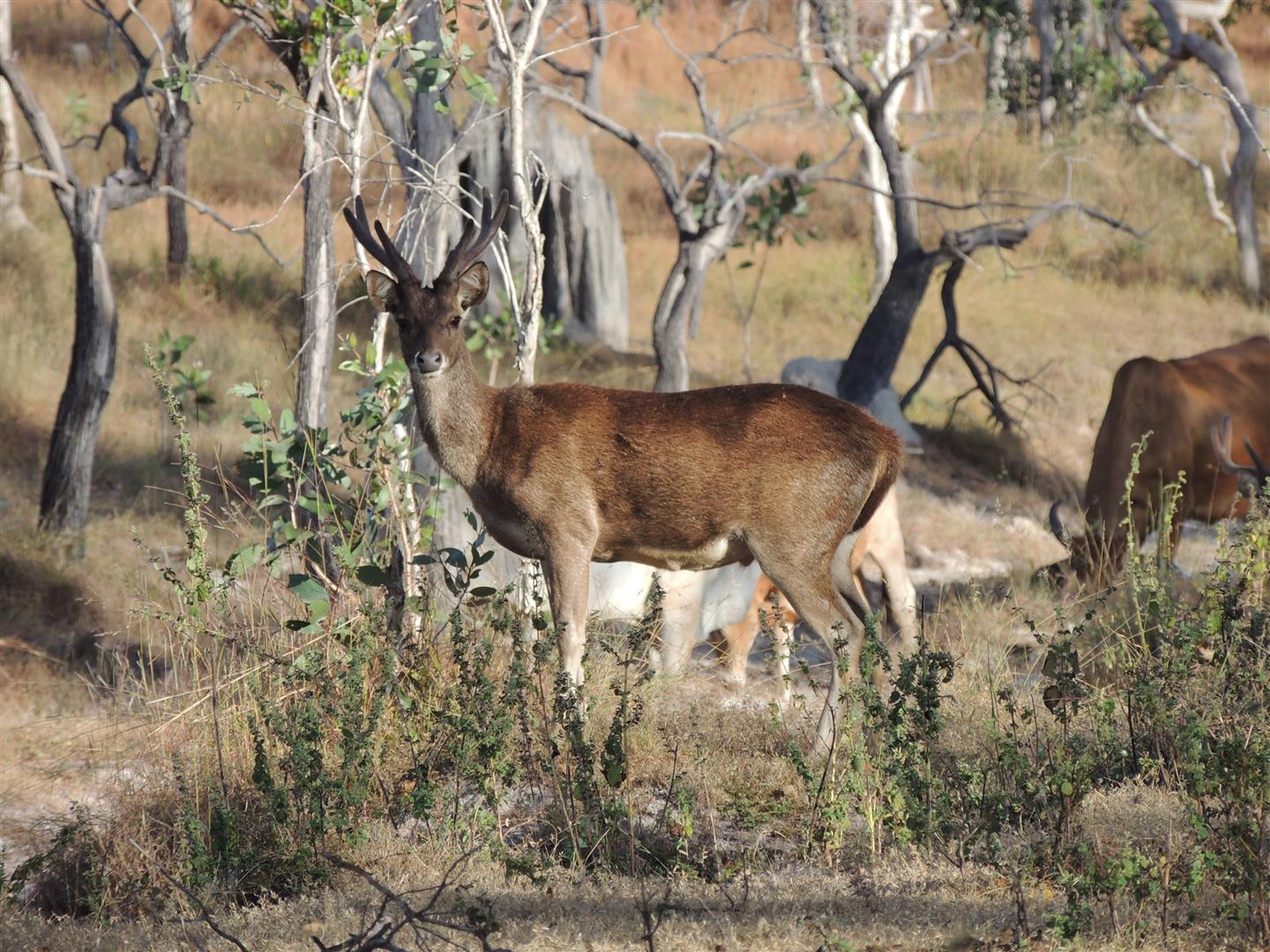 Nick asked if I wanted to shoot a pig. “Why not” I said and it was into the truck and after a quick drive and stalk we had six pigs in our sights…booomm!! The 300 Win Mag had pigs running in all directions. Soon we found our pig and took a few photos before returning to finish our lunch.

Mid afternoon we again drove out to the swamps and dry river beds where we parked the truck and began to slowly walk thru the long grass and light timber in search of a trophy stag.

We stopped frequently to glass the distant waterways and scrub when Nick suddenly spotted four quality stags at around 400 metres bedded in the shade of the warm afternoon sun. There was a fine trophy stag amongst them but they were all quite obscured by the surrounding trees and scrub. We crouched patiently with Nick glassing each and every movement our stag made.

I crawled to a small sapling and readied myself to shoot when the word was given. For more than forty minutes I watched through my Leupold scope as the stag’s antlers flicked back and forth with his body hidden behind trees. My eyes were stinging from the sweat, my fingers and hands numb from gripping the rifle stock, my back ached from bending but there was little else I could do but wait. 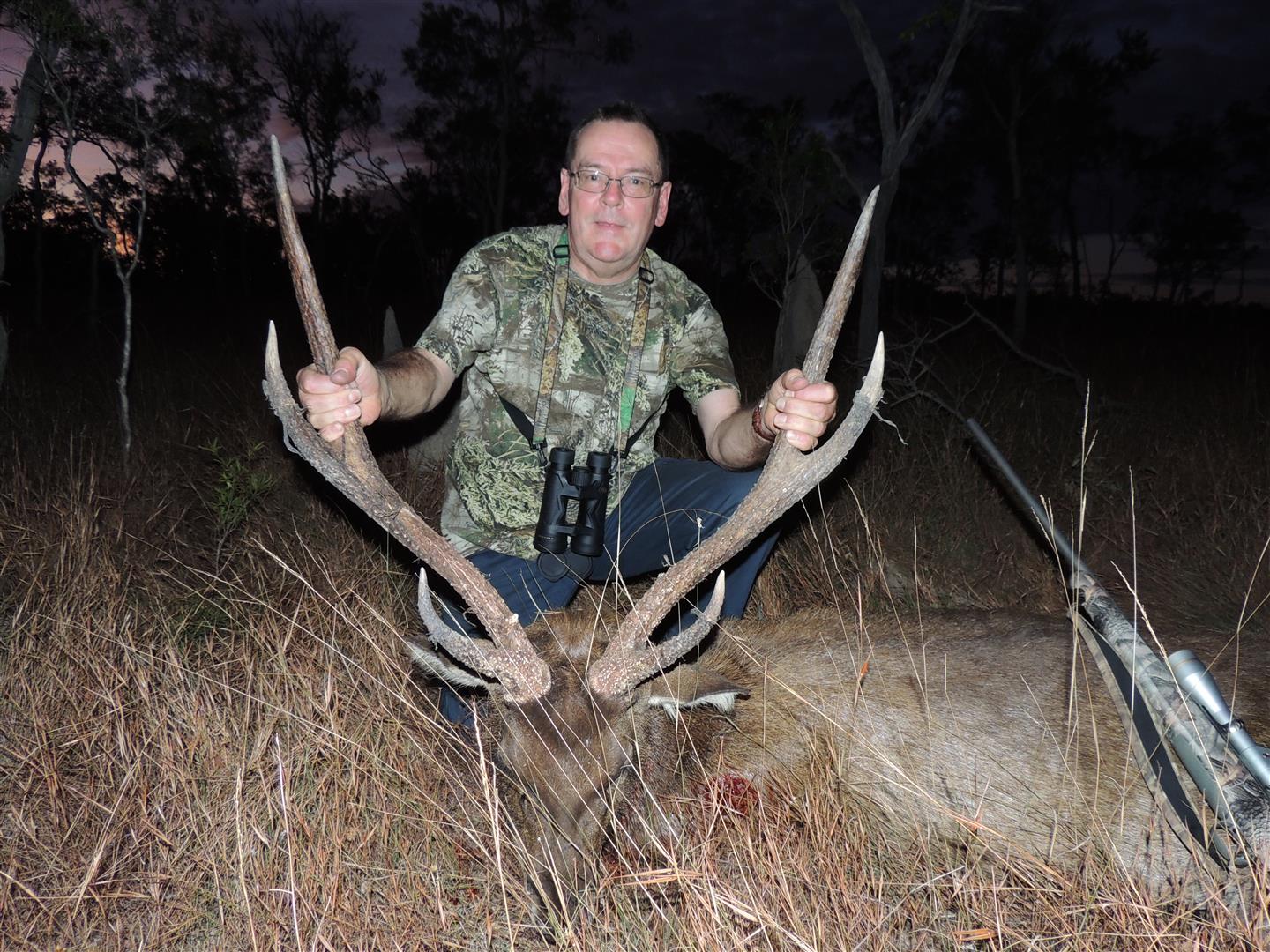 Suddenly, one of the smaller stags stood up and stretched his head and shoulders and sniffed the humid air. Soon another Stag stood up and a few minutes later another until finally our stag got out of his bed. But again he was completely hidden, had he disappeared?

Nick was right behind me with his binoculars firmly focused on the stag and in a whispering voice he said, “He is behind the tree and going to come out on the left”. Within seconds the stag appeared and in an instant I focused the crosshairs on his shoulder and slowly squeezed the trigger. The stag was hit hard and he fell where he stood.

We waited several minutes and slowly made our way towards the stag. He was an exceptional six point trophy with long even antlers and tines and a perfect cape. I could not have been happier and with fast fading light we took a few photos to ensure the memories lived on.

We finally arrived back at camp around 8.00pm and hung the deer in the cool night air. We were soon joined by the property owner and the three of us celebrated a great hunt well into the night.

The following day we hunted solely in pursuit of ‘Ol’ Handlebars’. It was like trying to find a needle in a haystack. We drove to many areas of the 185,000 acre property but never saw him. We repeated the same in the afternoon with no success.

The next day we hunted the same areas, again nothing, and in the afternoon we tried a few new areas that Nick suggested might hold the elusive stag.

As we made our way along a track that followed the edge of a big swamp we frequently stopped to glass the distant scrub and the other side of the swamp some 400 metres away.

Suddenly, Nick said, “There he is on the other side of the swamp”. 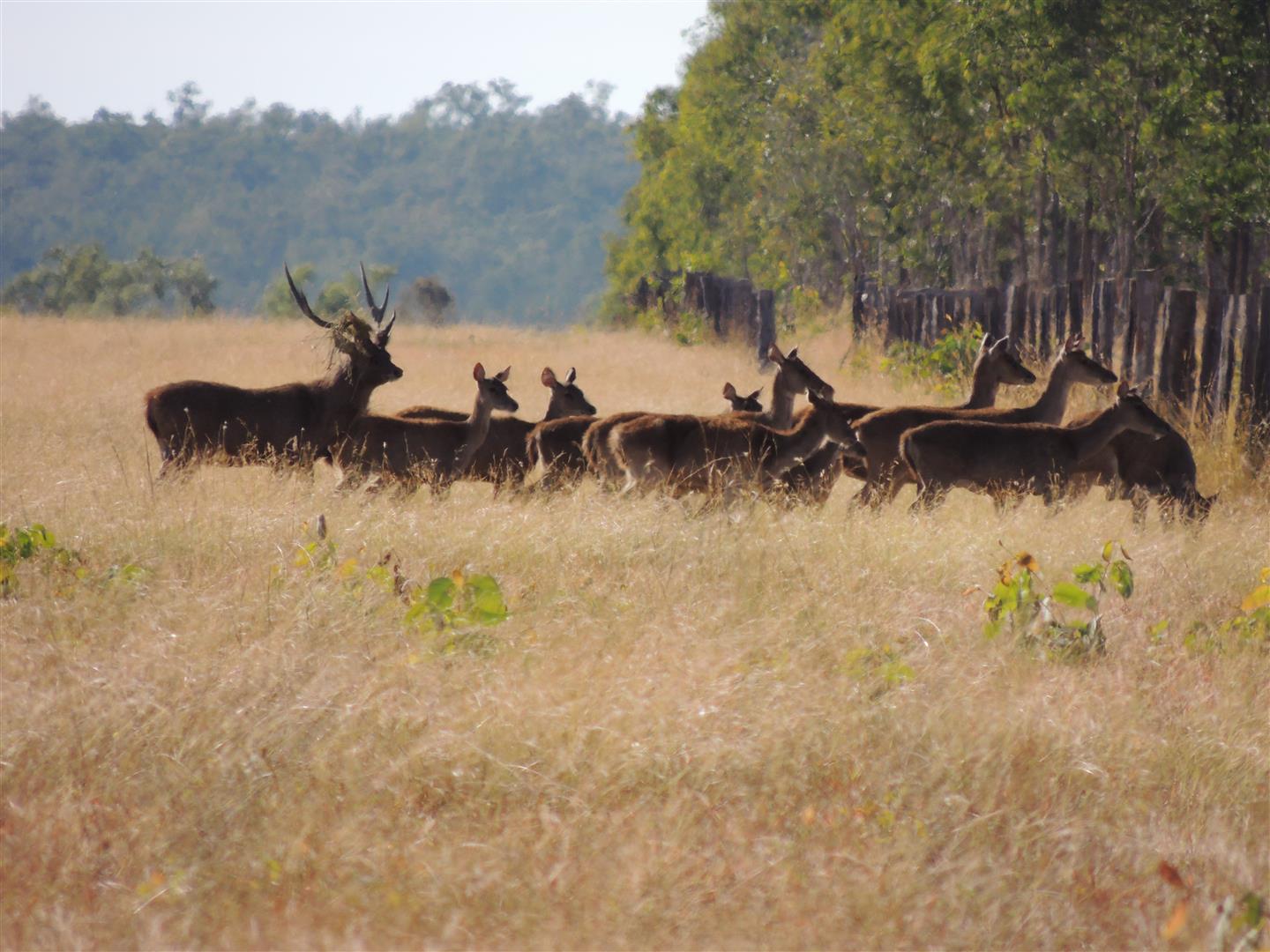 Our Stag had joined another group of deer some five kilometres from where we saw him on our first day.

We drove on a short distance and parked the truck and we quietly made our way in the direction of our stag, having to walk around the edge of the swamp to gain a closer look.

Following a long stalk in the warm and humid air with light showers, we could now see our stag at 200 metres, so we settled in to our shooting position and waited for a clear shot. Within a few minutes the stag was moving off with the deer he had joined up with. Only a split second offered a clear shot and the .300 Win Mag did its job and a follow up shot ensured I had taken another exceptional trophy.

We recovered the stag and admired the unusual formation of tines on the antlers, the exceptional cape and most of all a fine trophy to be admired and proud of. 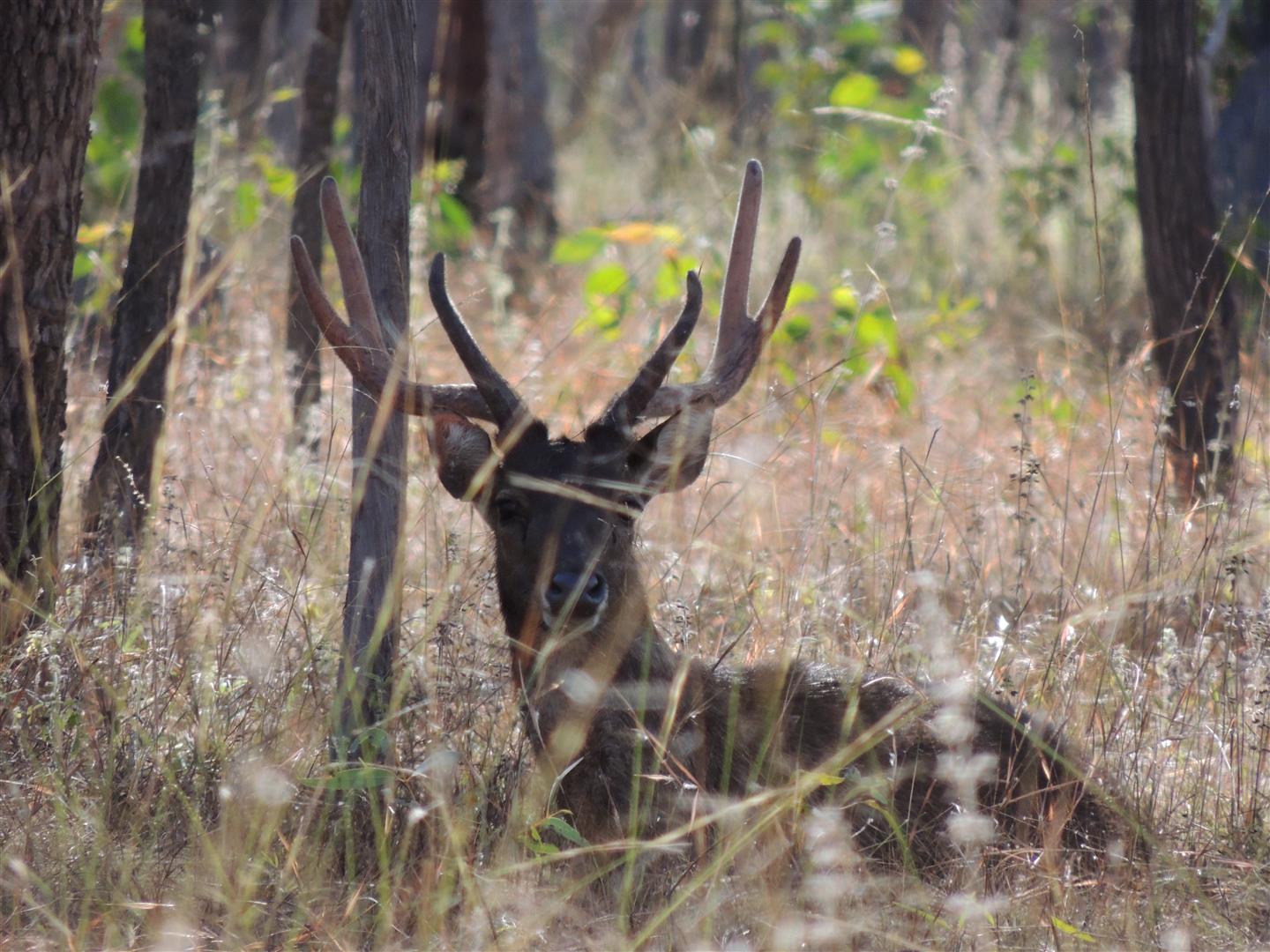 The following day it was time to leave this outstanding hunting area and say goodbye to our hosts for the past four days. On the long drive back to Cairns Nick and I re-lived the past few days in every detail, it was truly a hunt to remember.

I would recommend to anyone thinking of doing a free range Moluccan Rusa hunt up north to contact Nick Cherapanov, Nick is great company, a fantastic guy, very easy going and above all an exceptional hunting guide. Email: info@nchunting.com.au