In the eye of the deer holder by Asher Dezsery

The soft afternoon glow spilled across the pasture as the first real cold snap settled in for the season. The Rut in South Australia had come to an end- but then again it never really started either. Mild days, sweaty nights, the odd cold morning here and there. The bucks croaked, groaned and fought all over the place for a month but never really settled into a proper pattern.

I’d spent weeks in the Adelaide hills, searching desperately for anything worth taking. Unfortunately only countless young males and does presented easy pickings, and I left shaking my head often. But this is when the SA deer scene really shines. The post-rut mayhem, where the big boys emerge out of the woodwork to beat inexperienced bucks to a pulp with one foul swoop, and claim entire harems with next to no effort. These old, weathered war lords prowled the scrub, looking for glory in a forest they had claimed for years. 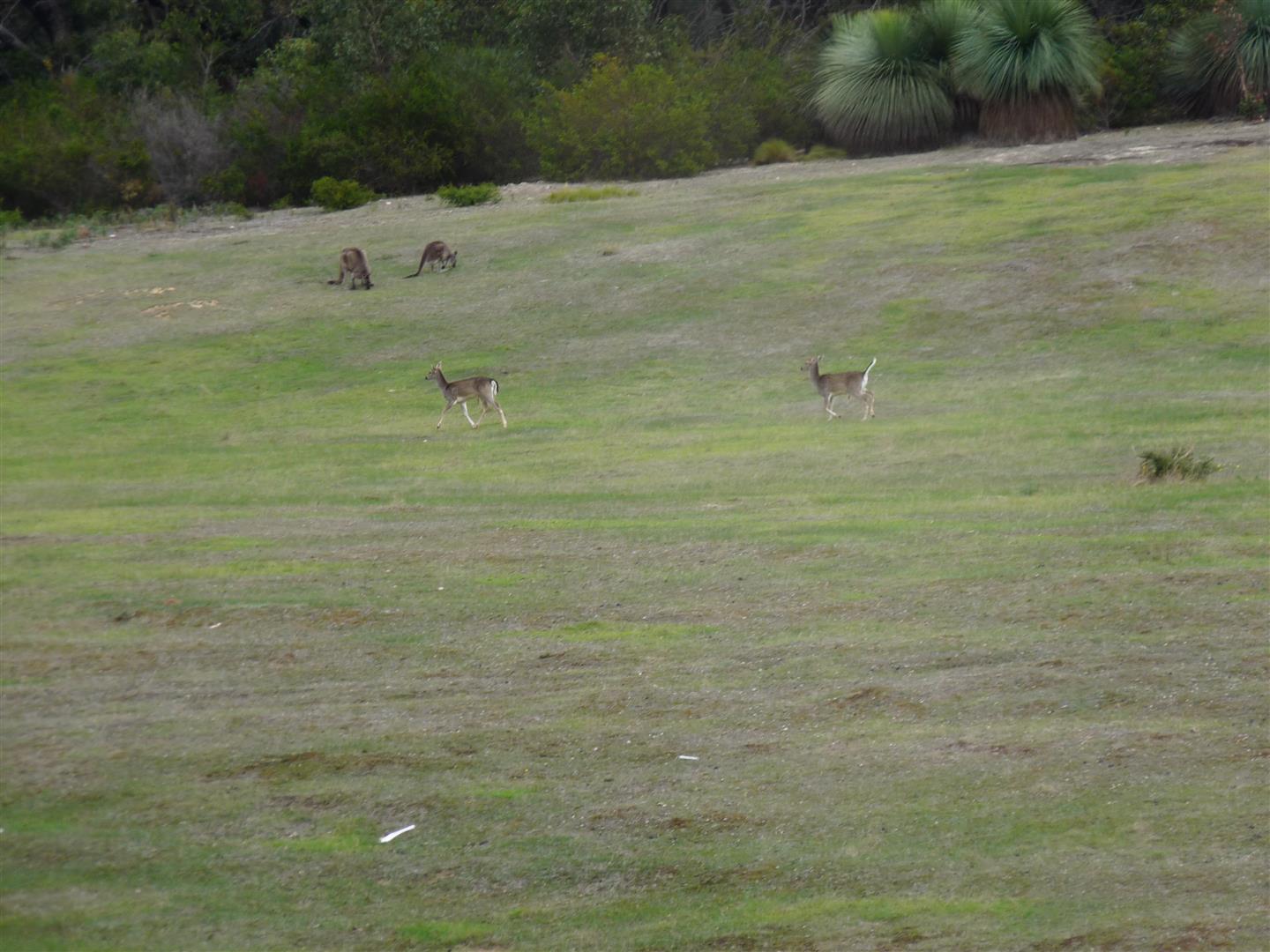 Often it is spoken of ‘trophy’ bucks, with individuals sweating feverishly over pints around the camp fire, speaking of the perfect length, number of points and spread of palms. Realistically there is nothing more noble than a big, old beast- past his prime and educated to the brows. In my small amount of years fanatically studying deer, I’ve learnt to experience the utter satisfaction of outsmarting ancient, angry brutes. Today I’d claim one for the wall for character and character alone. After all, isn’t this why we hunt?

Patiently I waited, for the perfect amount of light. Id hunted this property over and over, and knew every tree plot, fox hole and rolling hill like home. Countless does and bucks had been taken here over the years, however Adelaide is a harsh, unforgiving place that few are able to gain access to.

Unfortunately the rarity of deer here spurs incredible poaching pressure, with anything with two sticks on its head being mowed down under spotlights from the road side or illegally with silent bows. This means shocking genetics and a very small amount of mature males amongst the local SA herd- but it also means a huge appreciation for older, wiser bucks.

Donning backpack and cap, I smiled as the warm, golden light blazed across the hillsides, painting everything in an inviting hue. If it wasn’t for the cooler nights I wouldn’t be out here. But I knew the bucks would be seeking late-season does, while they nipped at green shoots and sunned themselves desperately before dark- making the most of the recent rain.

I vowed to take the harder path this afternoon, and show patience to allow for skittish does. Morning deer are easier to hunt here, with the night-shift sketchy and twitchy as they newly emerge from bedding. Solo, I was able to move quickly and quietly, and fell more in love with this lifestyle we live with every step I took. No distractions, no other soul around. Concentrating only on the task at hand as work and stress evaporated with every step I took as I crouched through the native bush around me.

This particular property was loaded with sheep, which has never done well if the stock were congregating around the creek beds. Thankfully there wasn’t much feed and the owner was still supplementing feed with Lucerne, so I was safe to proceed whilst avoiding the odd fox and kangaroo grazing quietly without issue. 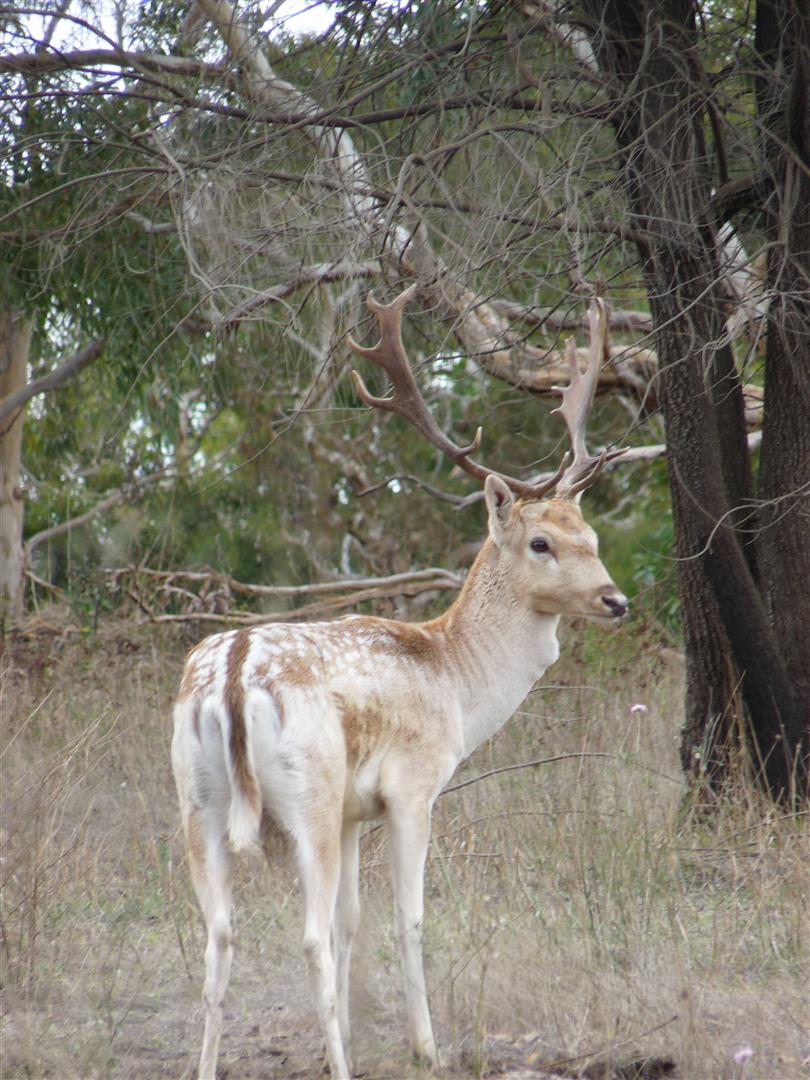 A soft wind threatened to swirl in the wrong direction, but for now I was safely downwind, and I hoped that for just one hour more I could continue stalking without a breeze on the back of my neck. Not 20 meters into the first forest strip I could hear the quiet “meh, meh” of does pushing their aging fawns through the creek bed, moving swiftly towards newly emerged pasture ahead. I breathed quietly amongst the acacia tress, gazing into the scrub for bucks tailing the moving does. Nothing. But If I did come up empty, I could sleep at night knowing I had given it every opportunity.

Patience I had learnt after shooting countless does for meat. I ignored the old saying ‘a bird in the hand’. It didn’t even apply today. Sometimes the excitement and reward of venison spurs an early shot, but it wasn’t until now I’d really recognized how far I had really come since butchering my very first deer deep in the hills. I was more than happy to pass up meat for the challenge of a smarter, wittier reward.

Meandering through the strips of native bush, I often had to turn away or re-route with more and more deer slowly filling the pasture corridor I was aiming for. Surrounded by bushland, this particular patch of pasture was the holy grail of feed for the local kangaroo and deer population, with not much else on offer locally other than native vegetation.

Settling into a dark, dense patch, I knew there was less than an hour left of light and if there was this many does, a buck wouldn’t be far behind them. One by one, small males slowly emerged, and I grinned at their nervousness. These were flighty for a reason, and it certainly wasn’t because of myself with my positioning in the wind and shadows. Several times I needed to catch my breathing and heart rate and bring it back to normal. It all just seemed too perfect. 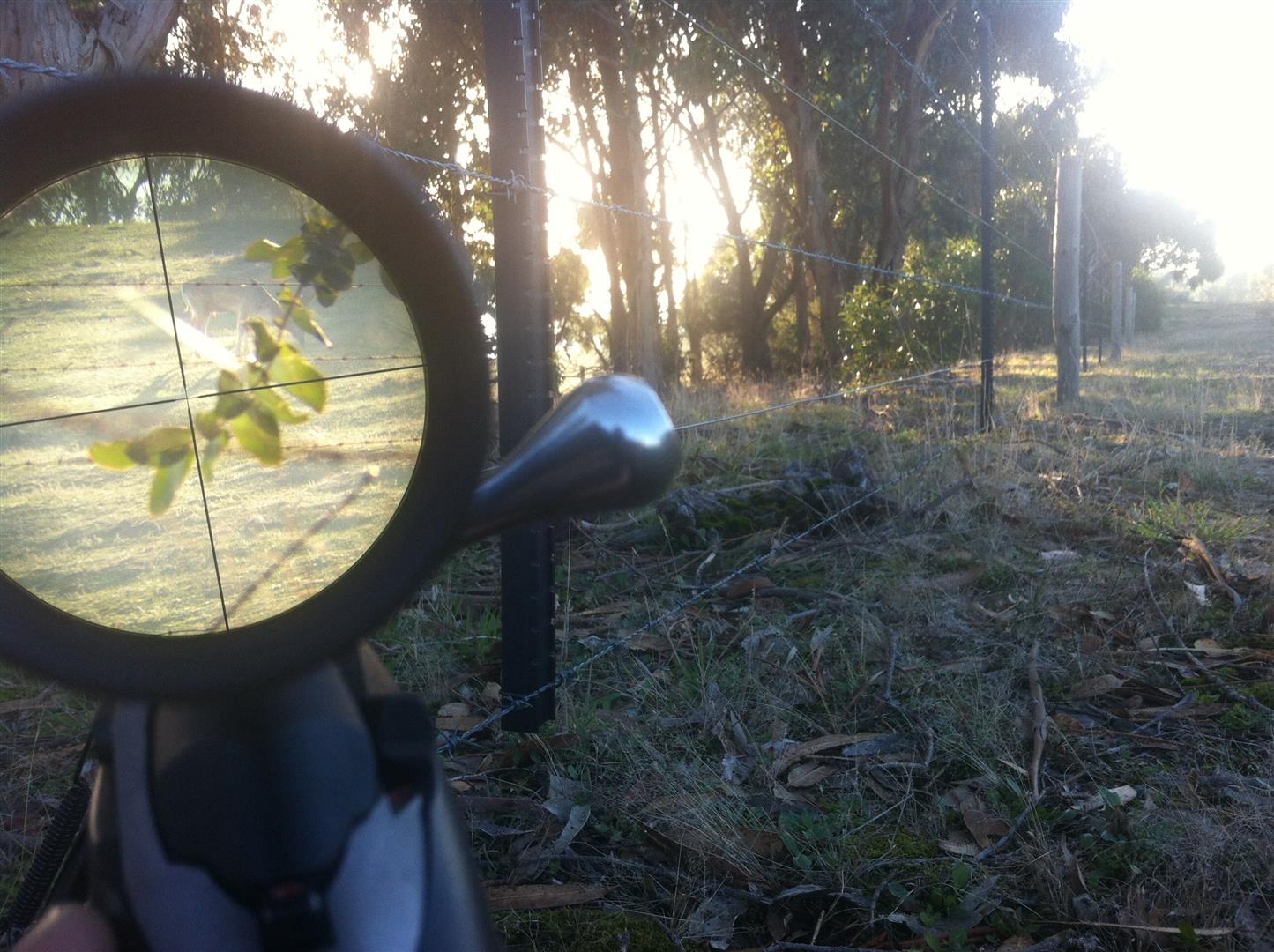 The hillsides on either side were full of screaming Galahs, with the entire area filling further and further with life of all manner. It was almost as if the goal had already been achieved. Simply listening to the blessing of solitary sanctuary. A light breeze stirred and I quietly zipped up the pockets on my jacket as the cold started to settle in and light quickly faded to shades of deep afternoon. Shadows got longer and the bird life became quieter. Several times I considered leaving now to save myself a trek in the dark. And then it happened.

The indescribable grunt, the bellowing croak and moan of an emerging patriarch. It rolled quietly out of the underlying creek bed originally, and became louder and louder as his noise rolled across the open grassland in front. Tree-ferns were knocked from side to side, and most of the smaller bucks were now staring disappointedly as they prepared to take flight. The does couldn’t have cared less.

I’d learnt enough to stay quiet this late in the season. After-all he was only showing off. A giant, bellowing croak would only make him suspicious and prompt him to quickly high tail it back into the blackberry thickets below- lost forever. So I waited, and watched- patiently observing saplings move. Once I saw his head emerge I knew this is why I had waited after all. Old and scarred, this ancient lad had seen some brawls in his time. He wasn’t particularly long, or particularly impressive- but geeze did I gain immediate respect for such an animal with his battered set of antlers and wrinkled neck.

Slowly he sniffed around the herd, and for several moments I watched as he graciously prowled the pasture, occasionally flicking threatening glances towards the 2-3 year old bucks milling around still. 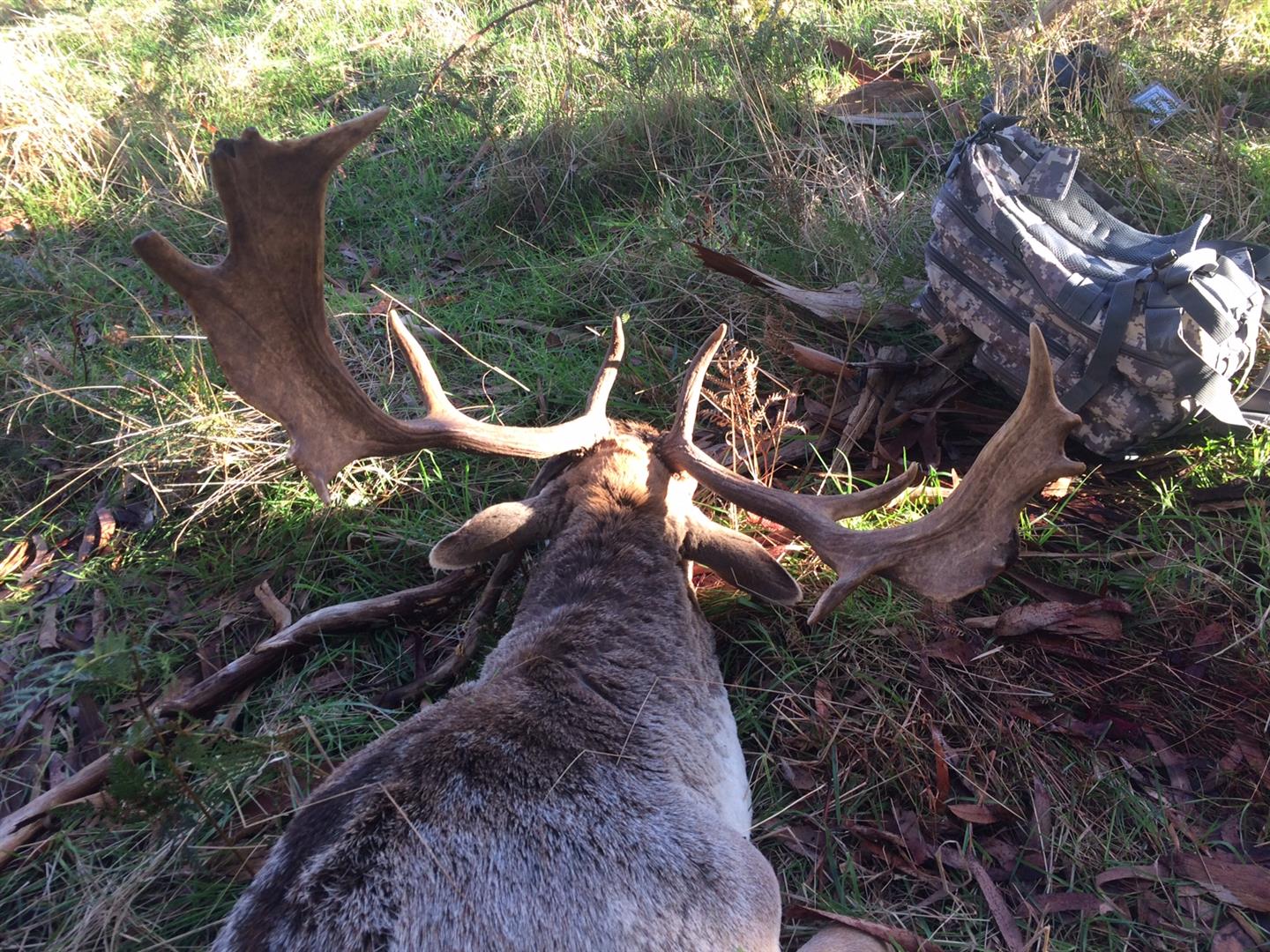 The Tikka .243 sat poised on its bipod as I lay prone amongst the kangaroo thorn. I laid the cross hairs of the Leupold on his swollen neck on his jaw-line and breathed calmly as I awaited the certain pause I needed. A noble beast required the most noble, instant finish. As if he understood, he stretched his neck for a final croak as the rifle kicked and the valley echoed with the final roar. Everything scattered in every direction whilst the fallen buck lay motionless and finished on the tree line.

As I approached I could see the sheer age and experience of this deer, and was honored to take such an animal. He wasn’t the highest scoring animal I’d seen, but he couldn’t be more perfect as the hunt was one of my most memorable. The carry out had never felt easier, and I was more than happy to spend a little longer laboring on my own.