Barasingha, also widely known as Swamp Deer, are endemic to the Indian subcontinent. They are the largest grassland dwelling deer of this region. As their name implies they predominantly live in and around swamp habitat. Populations that were once wide spread throughout northern and central India are fragmented, and two isolated populations occur in southwestern Nepal. It is said to be extinct in Pakistan and Bangladesh however there are still rare reports of sightings in Pakistan. The Barasingha is a vulnerable species. The destruction of their habitat due to deforestation, the draining of swamps and marshes for farming, poaching for its antlers and diseases transmitted by domestic cattle, have all led to the decline of the Barasingha in India. There are three subspecies:

Western swamp deer R. d. duvauceli, has splayed hooves and is adapted to the flooded tall grassland habitat in the Indo-Gangetic plain. During the early 1990s, populations in India were estimated at 1,500–2,000 with an additional 1,500–1,900 within the Sukla Phanta Wildlife Reserve of Nepal where population later increased to 2,170. Within Nepal, relocation practices have been adopted to establish additional herds within further national parks. Erected netting traps have been used, stretched across open grassland, where deer are then driven by lines of elephants and human-beaters that push the deer into the collapsible netting. Veterinarians administer sedatives and ensure the well being of the deer where they are stretchered from the swampy plains to awaiting transport and relocation. 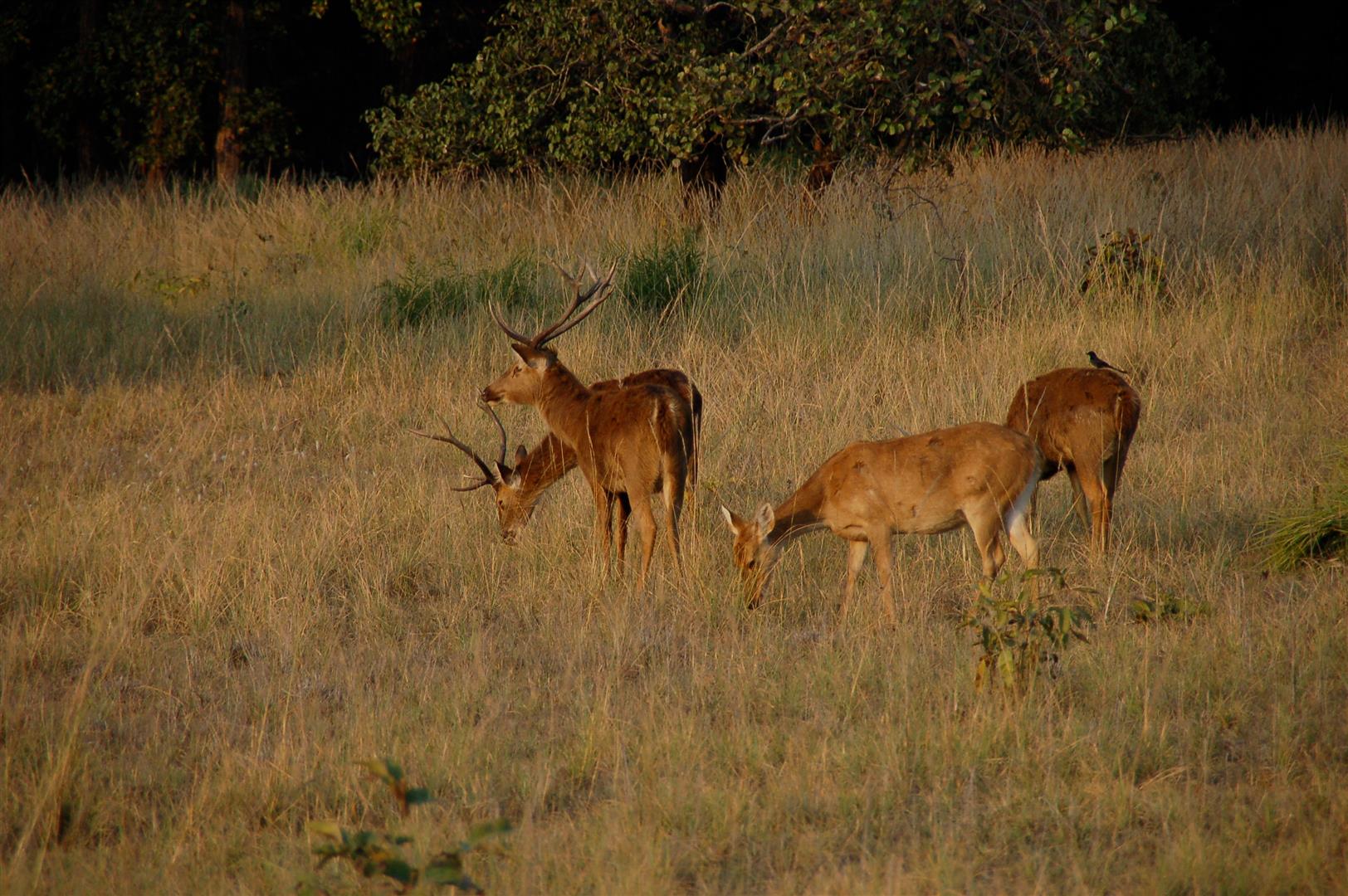 Southern swamp deer R. d. branderi, has hard hooves and is adapted to hard ground in open sal forest (a forest type dominated by a single plant species, commonly known as Sal tree. It belongs to the category ‘Tropical Moist Deciduous Forest’) with a grass understory. During the early 1970s there were only about 60 individuals that survived. It was very close to extinction when a successful breeding program and conservation practices at Kanha National Park brought the animals back from the brink. A captive breeding program was established and habitat improvement program implemented. It survives only in the Kanha National Park, where the population numbered approximately 500 in 1988. There were 300–350 estimated at the turn of the century and 750 in 2016. The Barasingha hard-ground swamp deer is the state animal of Madhya Pradesh in Central India.

Eastern swamp deer R. d. ranjitsinhi, is only found in Assam, where the population numbered about 700 individuals in 1978. During the 1980s and civil uprisings many of the deer and other wildlife species within Kaziranga National Park were poached and numbers decreased. 400–500 were estimated in Kaziranga National Park at the turn of the century. After a census conducted in 2016, 1148 were estimated in the park. The only Eastern Swamp deer in existence survived at this place – in and around extensive swamps. It was feared that at any moment a potential large flood could wipe out the entire herd and they would become extinct. Due to this a large bamboo framed, feed-and-funnel, style trap was constructed and high fences were covered with canvas and lined inside with tall grass. 17 deer were captured from this site during the first capture process by allowing them to become accustomed to feeding within the trap and by finally crushing them into the funnel and awaiting covered-trucks. A second successful capture ensued. From these captures an insurance herd was established inside an additional National Park. 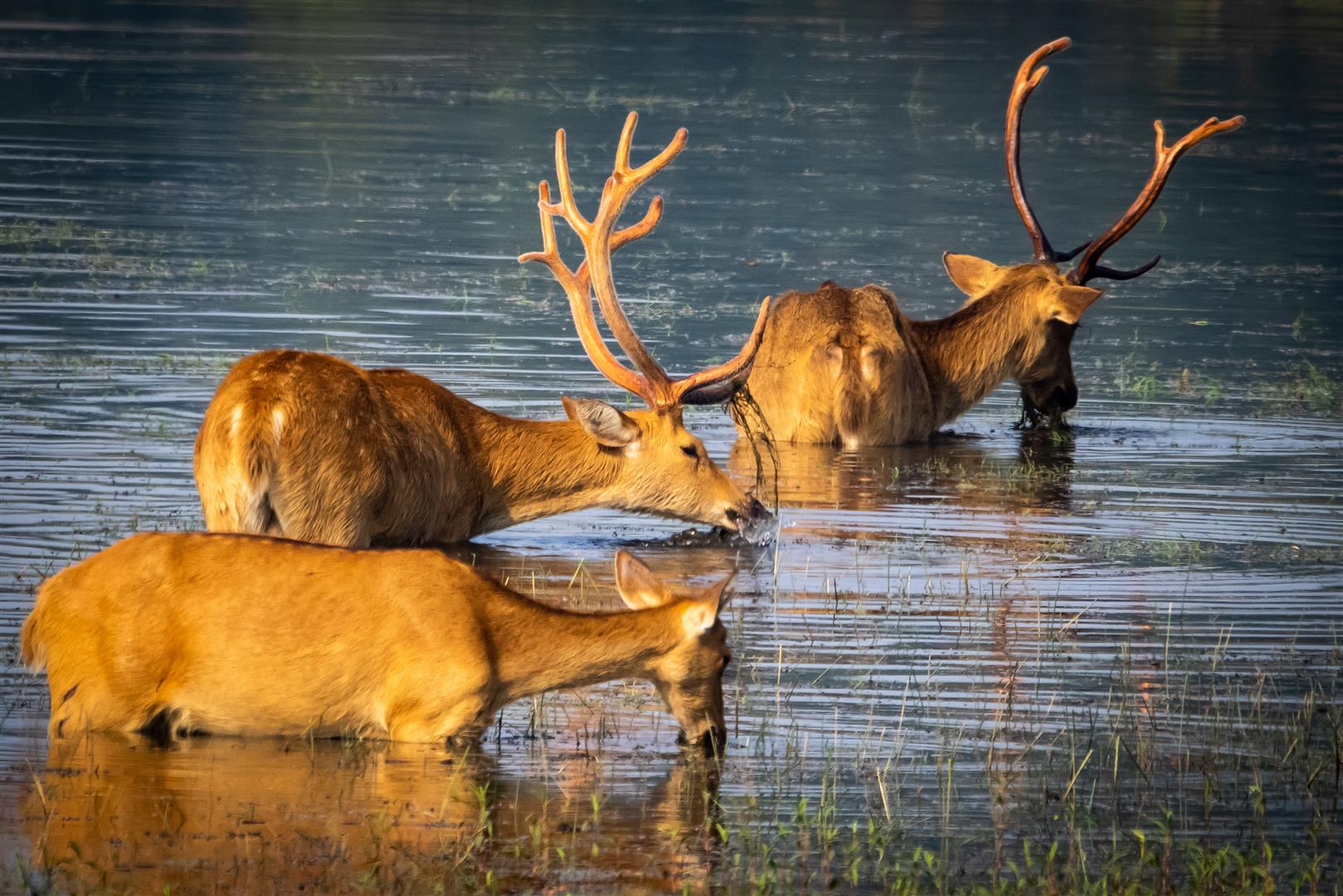 The swamp deer is distinct from all other Indian deer species in that the antlers carry more than three tines per side. Due to this specific character, its was named Barasingha, (in Hindi) meaning “twelve-tined”. Mature stags grow 10 to 14 tines, and exceptional specimens have been known to have up to 20 points.
The Barasingha is a large deer with a shoulder height of 44 to 46 in (110 to 120 cm). It’s a deep chested and handsome deer that carries its head held high. Its winter hair is rather woolly and yellowish brown above but paler underneath. The throat, belly, inside of the thighs and beneath the tail is white. In summer the coat is not unlike the summer pelage of red deer with white spots along the spine. The face is elongated with a button nose. The neck is maned. The ears are large but not quite as rounded as a Sambar. Females are paler than males. Young are spotted. Average antlers measure 30 in (76 cm) around the curve with a beam of 5 inches. A record antler measured 104.1 cm (41.0 inches) around the curve. Stags weigh approximately 170 to 280 kg (370 to 620 lb) classifying them as approximately the same size as Sambar although not attaining the record weights that Indian Sambar have attained. Stags roar during the rut. This sounds a little similar to a higher pitched Red Stag roar with a donkey type rise and fall in the volume. Females are less heavy, weighing about 130 to 145 kg (287 to 320 lb). 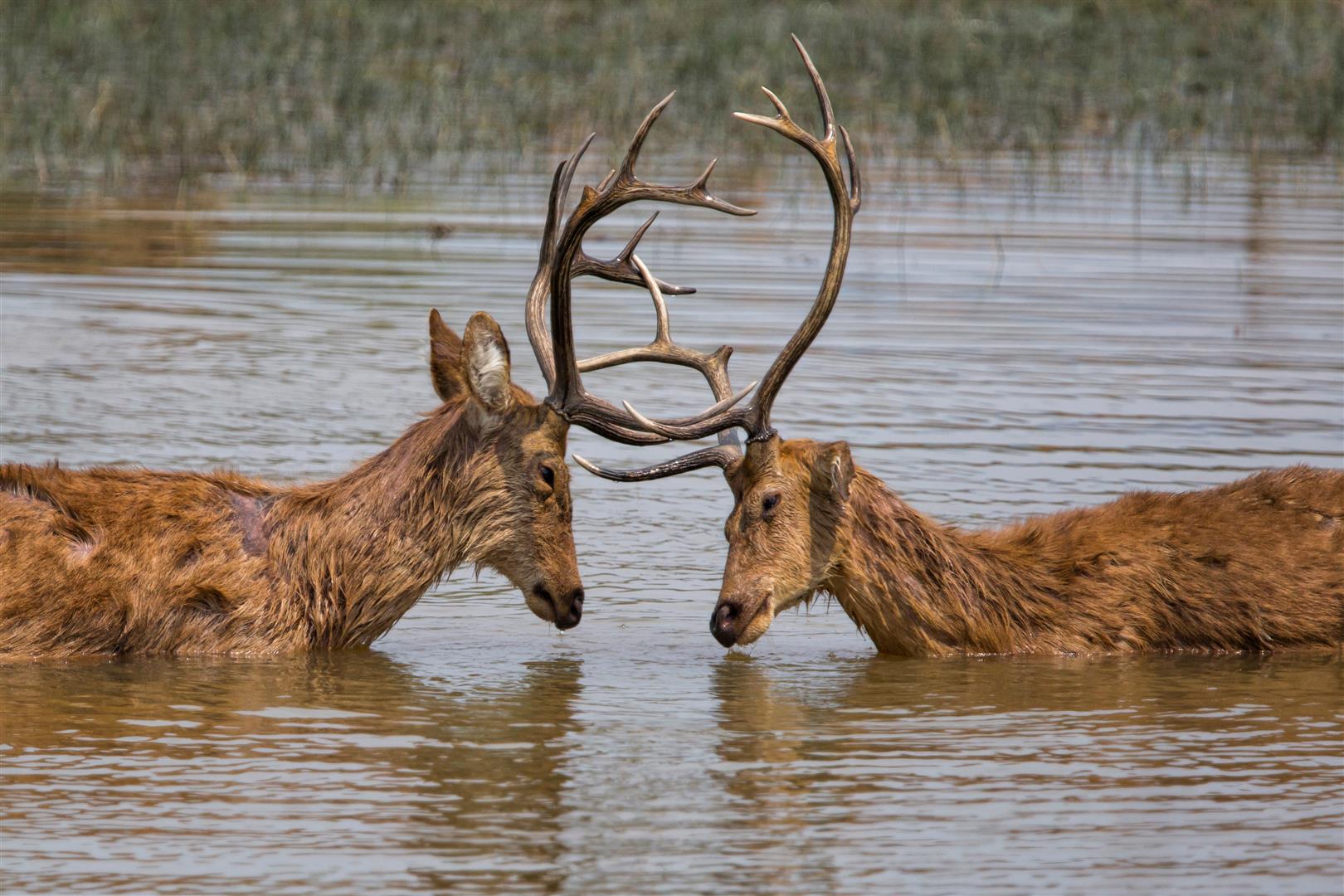 The Barasingha was previously seen across most of North and central India in areas of moist forest and swampland. With the destructions of its habitat, the Barasingha is now seen in isolated protected forests in Uttar Pradesh, Assam and Madhya Pradesh. It is mostly found in the Dudhwa National Park in Uttar Pradesh in North India, the Kanha and Indravati National Parks in Madhya Pradesh in Central India and Kaziranga and Manas National Parks in Assam in North East India. It is estimated that there are less than 5000 Barasingha worldwide however there has been positive signs of increase in their numbers where suitable habitat and protection is provided. Re-establishment of swamps and improved water availability has assisted Barasingha. They have a habit of drinking twice a day during cooler months and drink three times a day during hot weather. This habit is common with all Indian deer species and water is crucial to their spread, distribution and survival.

During the early period of live-deer importation into Australia some Barasingha arrived on our shores. Bentley, in his book ‘An Introduction to the Deer of Australia’ details how in 1912, five Barasingha were held in the Melbourne Zoological Gardens, Royal Park (where many of our early deer species were held). These five were ultimately shipped that year on board the S.S. Mataram along with three Sambar and a large number of Fallow deer to Port Essington, N.T. where they were off loaded and held in an enclosure and well fed with lucerne hay for sometime before being released (one of the Barasingha had escaped overboard at Cape York Peninsula so it is presumed the 4 remaining ones were released). The local aboriginals had been warned repeatedly that severe punishment would follow if any of the deer were speared. These warnings were effective and it is said that today the aboriginals will not touch the deer. Sambar, have been regularly reported in and around the original release site of Victoria Settlement on the western shores of Port Essington and, rarely elsewhere. A few specimens have been successfully hunted but the habitat is not well suited to them. During the late 1980s early 1990s, during my many ‘Dry Season, Top End’ guiding sojourns, while predominantly hunting Banteng, I observed considerable fresh sign of Sambar in the Wurgurlu Bay region on the southern coast of Cobourg Peninsula (I was not permitted to hunt the western side of Port Essington in the vicinity of the abandon Victoria Settlement as this was a separate concession). I spent considerable time searching widely specifically for deer however, unfortunately, found no evidence of the Barasingha or Fallow and only low numbers of Sambar in limited small, scattered pockets. This is very remote and in parts thick country and for many years there was some hope and talk that Barasingha survived however no credible information has surfaced as to their presence. I suspect that there was a lack of suitable water and swamps during the dry season however Banteng thrived and I observed and photographed some small horned buffalo deep within the forests of the peninsular by walking and wandering along several small creeks. 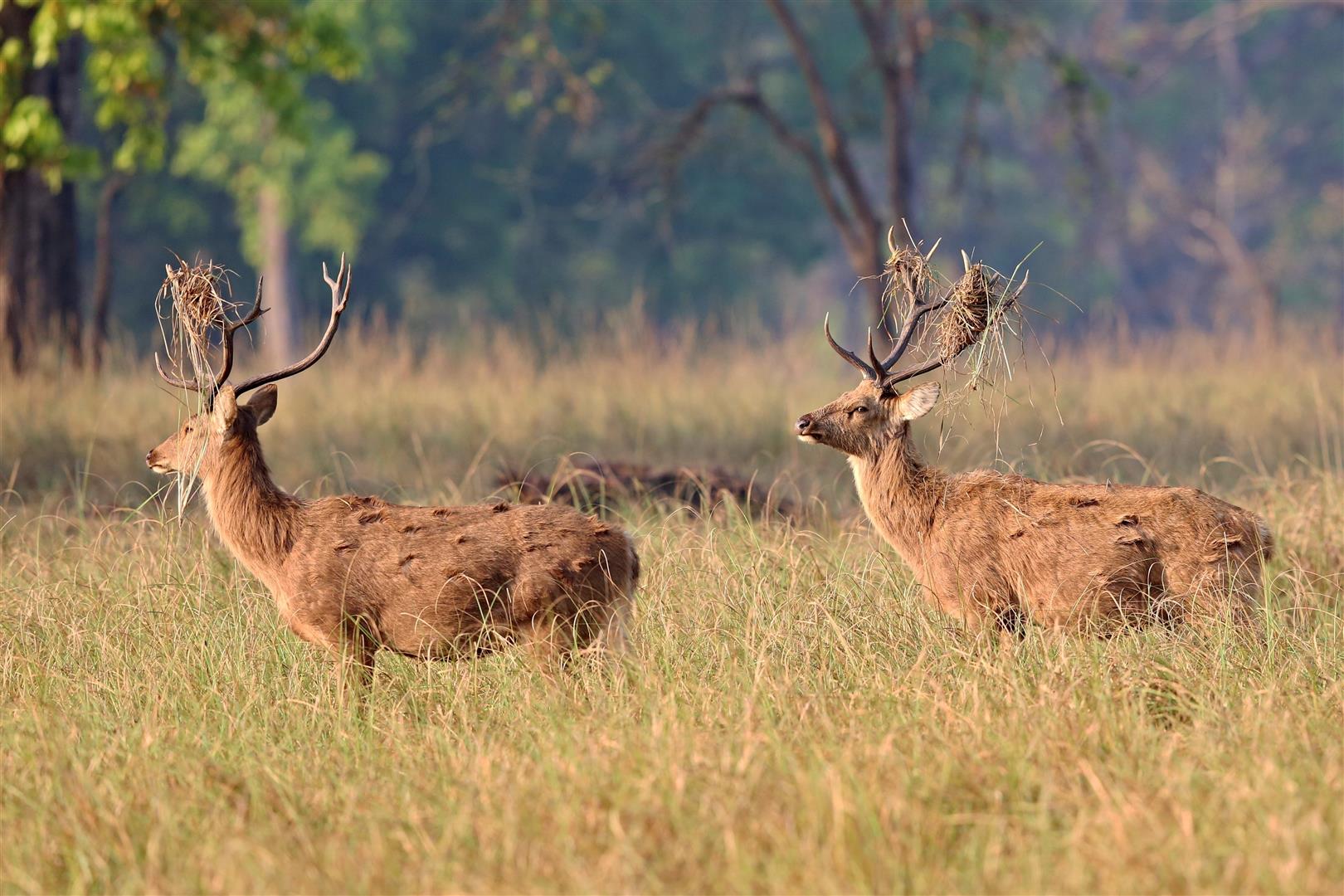 Barasingha can be found at Woburn Abbey, England. While they are reported as being also present at Margam Country Park this appears to be not the case (it’s possible they have been confused at this location with Pere David’s Deer which are present and in limited ways are similar).