Eld’s Deer are also known as Thamin, Brow-Antlered Deer or Dancing Deer and were first discovered by westerners in Manipur in India in 1838 (by Lieutenant Percy Eld) where that particular herd (R. e. eldii) now exists entirely within the Keibul Lamjao National Park that was established in 1977. Recent DNA analysis (Groves and Grubb 2011) refutes the classification of Rucervus and recognizes three ‘species’ of Eld’s Deer as Panolia: P. eldii, P. thamin and P. siamensis. Although R. e. eldii is very closely related to R. e. thamin based on genetic studies, it has significant different ecology from other subspecies as well as apparently being more divergent in morphology (differing structure of organism). 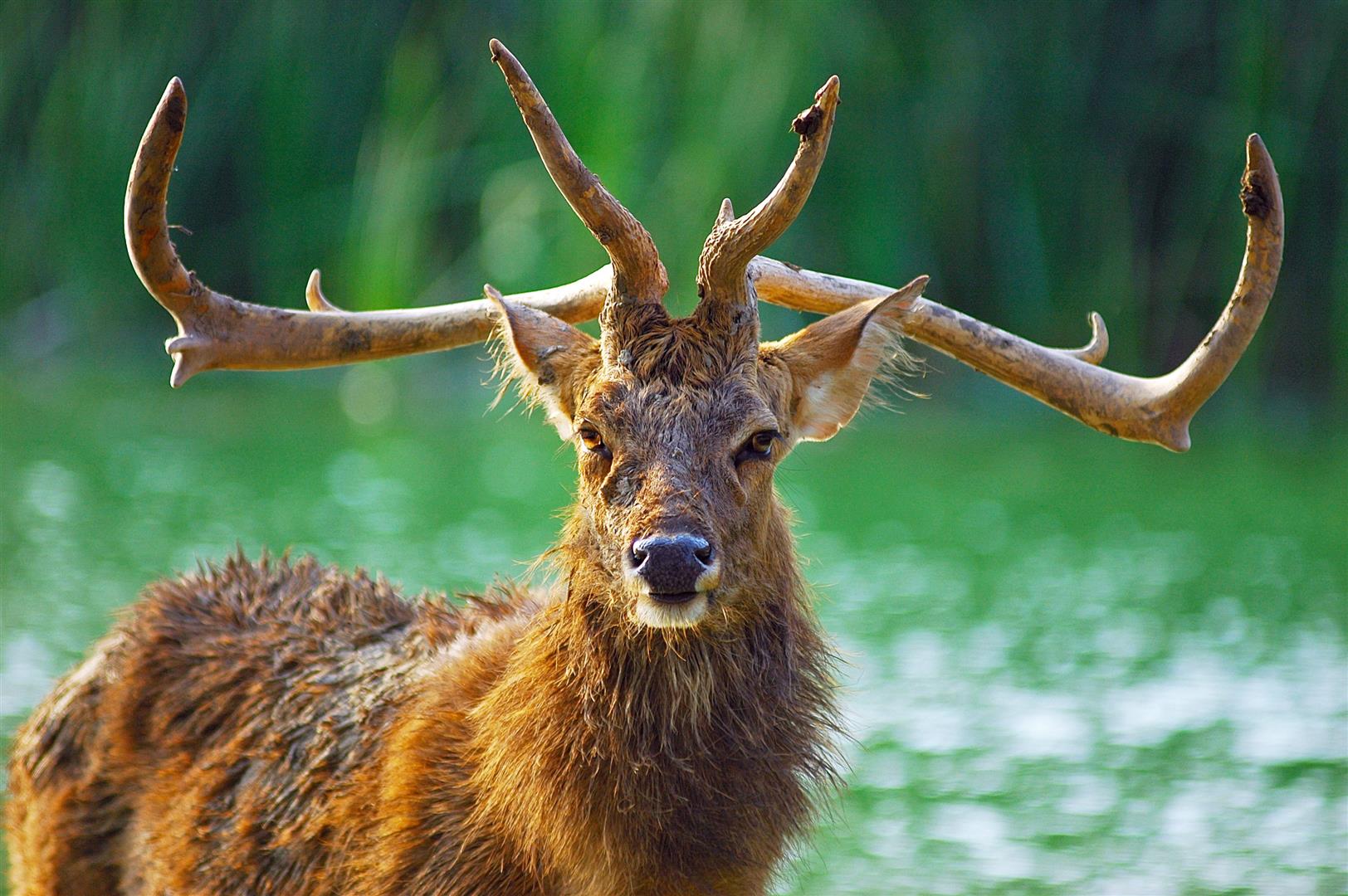 Eld’s deer are a medium size deer with a long body and long legs. They weigh up to 150kgs and stand approximately 110cm tall at the shoulder. The summer pelage looks a little similar to a red deer with a long Rusa style face. They have white spots along the dorsal ridge, slightly down the sides of their back line and on the upper part of their rear legs. In winter they resemble a Rusa/Sambar lookalike with a dark brown, longish, scruffy-coat but they are actually related to the Pere Davids Deer. They are very similar in body size and style to the Barasinga Deer of India (or a Mule deer of U.S.) and have a short tail. They have white hair around their muzzle, on the frontal chin like a Sambar and on their throat (like a Rusa). Their antlers can grow to 99cm (40inches) in length, and representatively, their main beams grow upwards and outwards while having a very distinct forward curve. As one of their names suggests they have strong/lengthy brow-tines and mature specimens regularly have tines growing upwards off the base of these. Their remaining points, which can be multiple, generally project upwards and forwards from the upper tops of the main beam, some do curl upwards and inwards. They are very agile and are capable of considerable leaps. The males enjoy wallowing.

The preferred habitat for wild Eld’s deer is lowland deciduous forest referred to as an indaing forest and is usually dominated by the tree Dipterocarpus tuberculatus. Indaing refers to sandy, flat terrain that floods seasonally. The range of Eld’s deer also includes monsoonal forest. Rucervus eldii thamin is found in a variety of habitats, ranging from dry scrub and thorn forest to open deciduous forest. There are three main types of deciduous forests in southeastern Asia: dipterocarp (indaing), dry (thandahat), and mixed (teak). They, like many deer species, are crepuscular in behavior and feed onto grassland and sometimes crops such as rice fields that potentially exposes them to conflict with farmers.

Their ranges are varied with R. e. eldii, situated in India: R. e. thamin from Myanmar, Westernmost Thailand; then R. e. siamensis from Cambodia, China, Lao PDR, Thailand excepting Southwestern, and Viet Nam. There is some dispute over a potential sub population that exists on Hainan Island, China however more recent studies generally accept the species belongs to the classification R. e. siamensis.

Eld’s Deer is classified Endangered and is just one of the more obscure deer species that I will begin to highlight within the next few issues of Wild Deer. It’s likely that in the near future Eld’s Deer could become classified as Critically Endangered. Once widespread from India to China and down to the Malay Peninsula they have suffered greatly from constant habitat loss. Their reducing, fragmented range is the biggest cause of concern along with illegal subsistence hunting where they are prized for meat as well as body parts that are used for traditional Asian medicinal purposes. There are two numerically significant herds of wild Eld’s Deer, R. e. thamin in Myanmar and R. e. siamensis of Cambodia, Lao and Viet Nam (of which the vast majority are located in Cambodia). 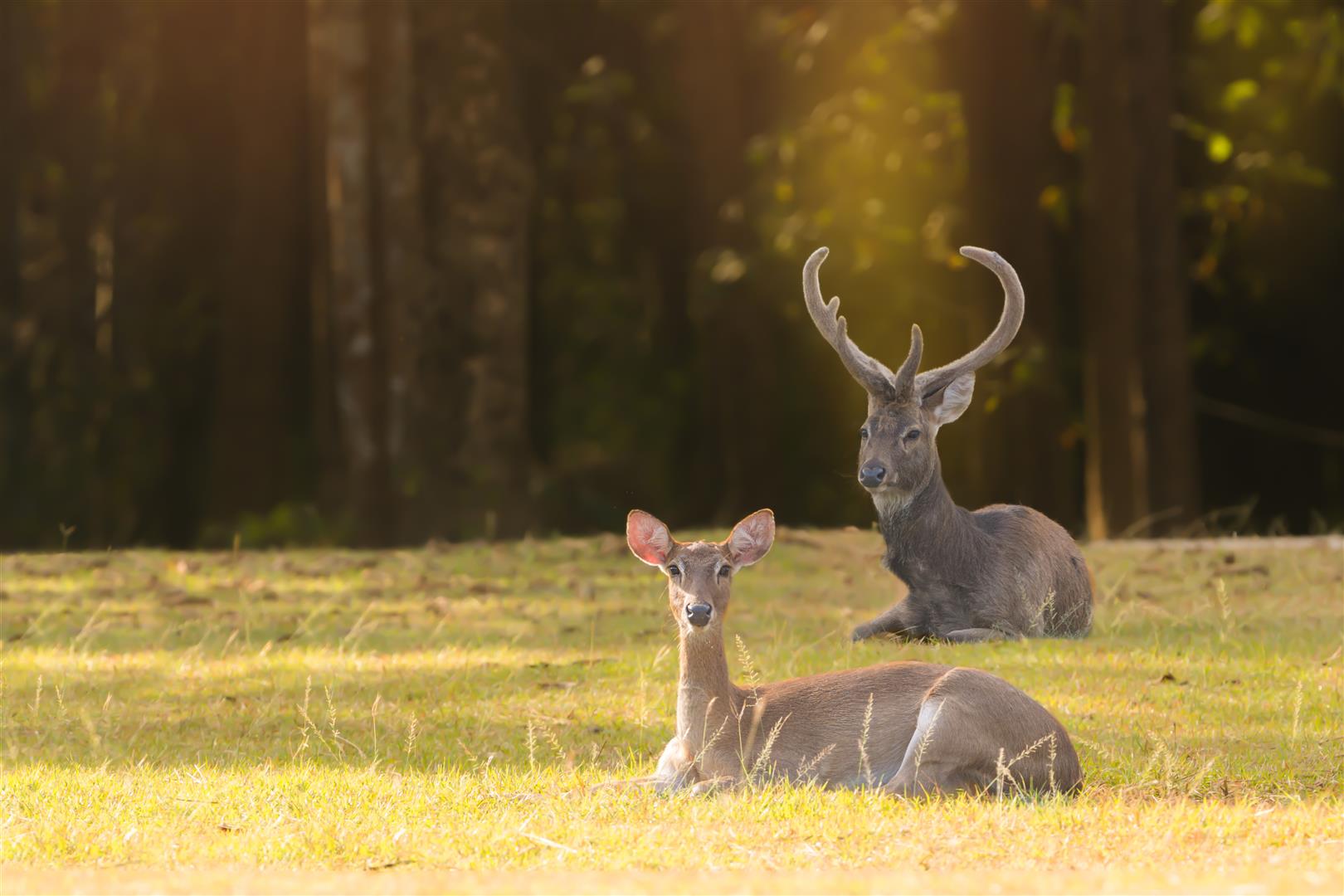 Recent studies conclude that habitat loss has accelerated due to expansion of economic and social land concessions into previously remote forest areas in Cambodia’s northern and eastern plains. This is impacting both protected and non-protected forests and no Eld’s Deer subpopulations are effectively secure. The Cambodian subpopulations are small, potentially none exceeding 50 mature individuals. The status of the Myanmar populations is also likely to be declining due to a combination of habitat loss and illegal hunting. A potential significant decline has also been reported from one of the countries two core-sites that is Chatthin Wildlife Sanctuary. Myanmar’s total population during 1992 was estimated at 2,200. Myanmars population has continued to decline. In Hlawga Wildlife Park just outside Yangon, many species of Myanmar’s native wildlife have been introduced. In contrast to Hog Deer, Sambar and Northern Red Muntjac, which have all increased to good populations, Eld’s Deer has failed to establish itself.

The status of core populations in both Cambodia and Myanmar is of critical importance for Eld’s Deer.

The good news is that the Hainan Island population of China that was decreasing rapidly over several decades (in the 1970s there was a reported population of 40 remaining – from a population of 500 in the 1950s) has through careful management been turned around. In 1976, 46 Eld’s deer remained on Hainan and although they suffered serious setbacks due to poaching, by 1991 the population had rebounded to 346 animals of which 261 were within the Datian Nature Reserve. By 2003 the population had increased to 1000 animals in Datian NR and commencing in 1986 captive and semi-wild populations were established at other facilities, the total population in which was approximately 260 animals in 2003. A semi wild herd was reintroduced in Bangxi Nature Reserve and by 2002 the population there was reportedly 115 animals. In 2003 a third wild herd was founded in Mihouling Reserve. China has had considerable success with saving several rare and endangered species throughout its country and will take such drastic steps such as confiscating firearms from all villagers who are in the vicinity of endangered herds. Although they have been successful with the revival of Eld’s Deer on Hainan Island there are fears of genetic bottleneck of the species. 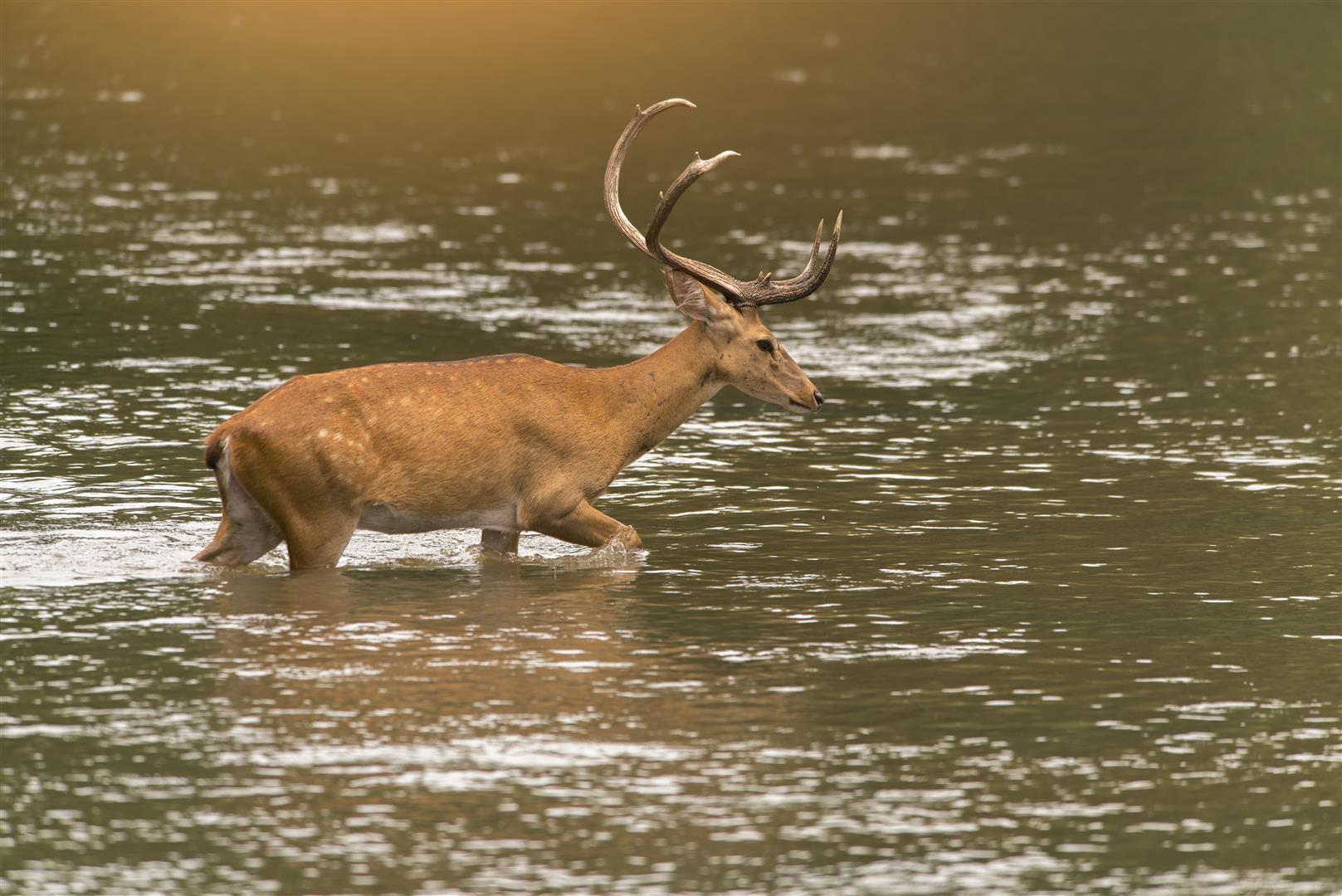 In India, R. e. eldii was thought to be extinct in the early 1950s but was subsequently rediscovered. By 1975 the only existing herd had reduced to about 14 animals located in the swamps and floating marshes of Lake Loktak. Thankfully at this location the Keibul Lamjao National Park was established in 1977. During 2006 – 2008, Eld’s Deer numbers were recorded through dung-density-counts as being stable. Scientists use a dung density count per square kilometer to calculate an estimated population. This system is just one of the globally recognized scientific population estimation methods. From this, the population during 2006 was estimated at 91, 2007 at 88, and 2008 at 92 individuals with a minimum estimation of 60 and a maximum of 136.

Continued presence of ancestral wild populations in Thailand is also now very unlikely. At best a few remnant individuals may survive or immigrate. The Thai Royal Forestry Department has a captive breeding program for both R. e. thamin and R. e. eldii and there have been attempts at introduction of the former in two areas (where it was never a native subspecies). 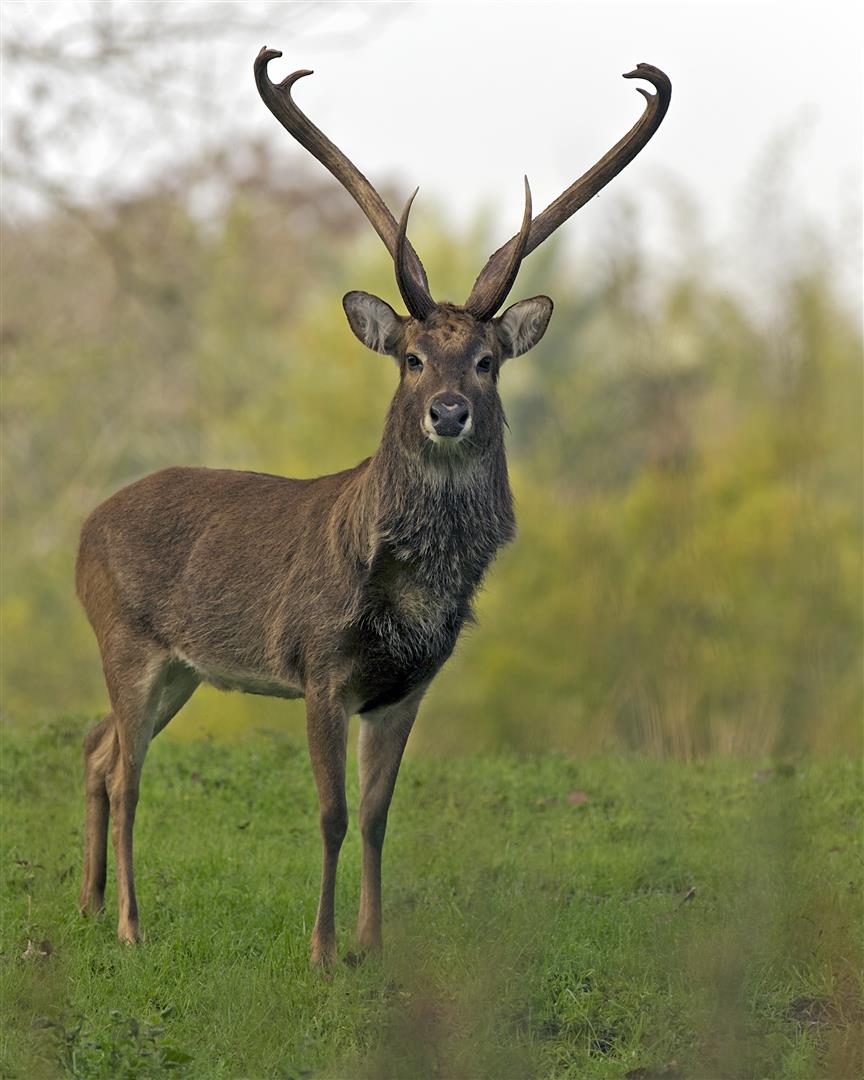 There are considerable zoo herds of Eld’s Deer that largely originate from early imports to Paris Zoo. These are now managed with registered stud plans implemented.

Eld’s deer can be hunted on several Texas and one Oklahoma, USA game ranches for a fee of approximately USD $11,000. They are listed on CITES as appendix 1.