Then I heard it, a strange sound, not far; 50 meters. It was like a bellowing sound not loud, but short and sharp, it was a sambar stag in full rut mode.

This stag would become the first sambar that I had shot, although I had seen lesser stags and hinds in the past deciding to pass them up waiting for a stag of trophy size to die for (that nearly was the case for me). I decided to concentrate on hunting sambar during their rut period through July and August of 1979. The location was the northern boundary of the Kaingaroa State Forest where there was a small herd living in the swamp country and pine plantation so I spent several weeks scouting out the lay of the land. On one of my trips I located a large wallow that had been used regularly also nearby fresh tree rubbings got my attention. This was the area that I would focus on.

It was a cool Sunday afternoon and after several hours carefully stalking every nook and cranny with plenty of fresh sign to keep me on the task at hand I was slowly stalking my way through a section of pine trees with plenty of scattered gorse making progress difficult.

Quietly cutting my way with my secateurs I made my way around an old logging skid site, again this area was completely overgrown with gorse slowing down my pace a bit as there was a lot of fresh sign. With the wind blowing at my face I could smell the scent of sambar and with plenty of scrapes and antler thrashing on small scrubs keeping my attention was down to creep mode with another patch of gorse ahead of me… then I heard it, a strange sound not far 50 meters away. It was like a bellowing sound not loud but short; it was a sambar stag in full rut mode. He was hidden from me out of view on the other side of a patch of gorse making grunting noises while thrashing his antlers. The stag moved through quite close now, the hair on the back of my neck was raised. I knew that prickly feeling in anticipation that something is going to happen, but not being sure of the outcome did not dare to move. 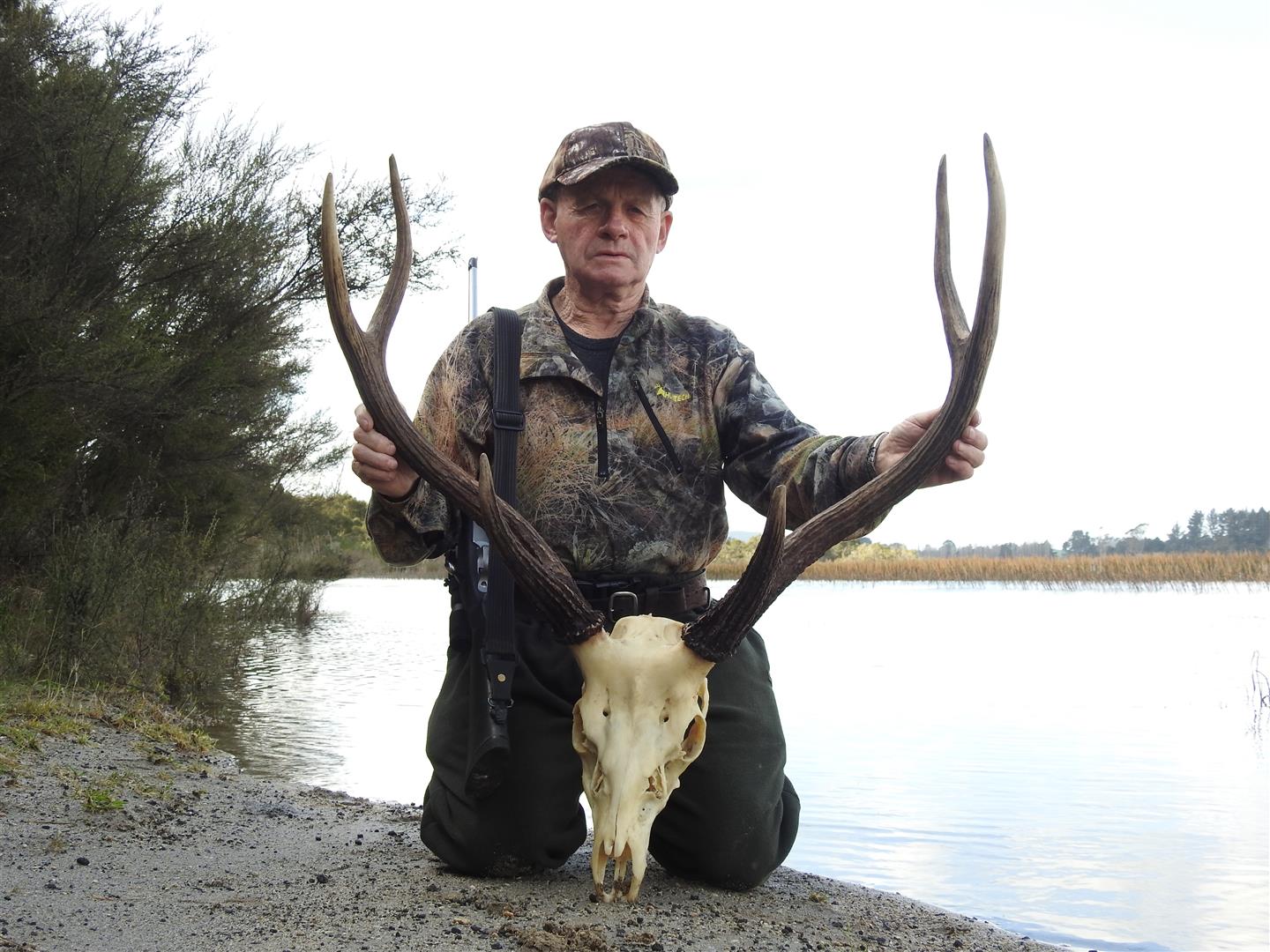 With my Bar.270 at the ready I gave a low grunt to see what his reaction was.

All hell broke loose as he burst towards me head down and antlers forward just three meters away. No time to aim, just enough to push the safety off and get two quick shots into him before leaping out of his way. But not quick enough ending up with the tip of his left antler grazing my nose, luckily my shots had broken his neck and he collapsed in a heap at my feet. He struggled trying to get up, snorting, grunting, digging his antlers into the ground, but he was fading fast then let out a bellow and expired. It all happened so quick there was no time to have a nerve attack, giving myself a bit of distance from this beast that was trying to make mince meat out of me.

When the dust had settled and he lay still before me I went over and touched his left eye with my rifle barrel, no sign of life showed. Only then did I catch my breath and take in what had just happened. Making the rifle safe I topped up the magazine and placed it in a handy spot, checking for any injuries to myself but there was only a cut to the nose with a nose bleed but soon cleaned that up then it was time to inspect this magnificent trophy class stag. The shear size of him, he was immense, nothing like I had ever seen, twice the size of a mature red stag.

I was wondering how to handle the recovery of him when suddenly, from behind me I heard the rustling of sticks cracking; shit I thought, not again, picking up my rifle and loading it ready for what ever. I could not believe it another Sambar Stag poked his head over some ferns no more than six meters from where I had previously been standing.

I did not need another stag to handle, so I held fire.

He was a younger stag and probably had moved over to see what all the fuss was about, I guess he had seen enough as he moved off taking the dead stags hinds with him. I can tell you I was a bit an edge for a while checking the immediate area making sure that the coast was clear. Returning to my stag a closer inspection of his antlers showed that he had broken the tip off his right side but soon found it where he had fallen.

This was a trophy of a lifetime and I decided to have him mounted.

After a considerable amount of effort I gutted him allowing the meat to cool down with a plan to recover him whole and was sure that I could get my dairy farmer neighbour to pick him up with his tractor. We did this taking a few hours into the dark, it was a long memorable day and will stay with me forever.

Tomorrow was another day that I set aside to cape him out and start processing his carcase skinning and loading him onto my trailer, taking him to be weighed and processed by a local farm meat packer. The carcase weighed 474lbs on the hook and yielded a truck load of meat.

I later had the head mounted and he is just as good 39 years later: the NZ Douglas score was 208.